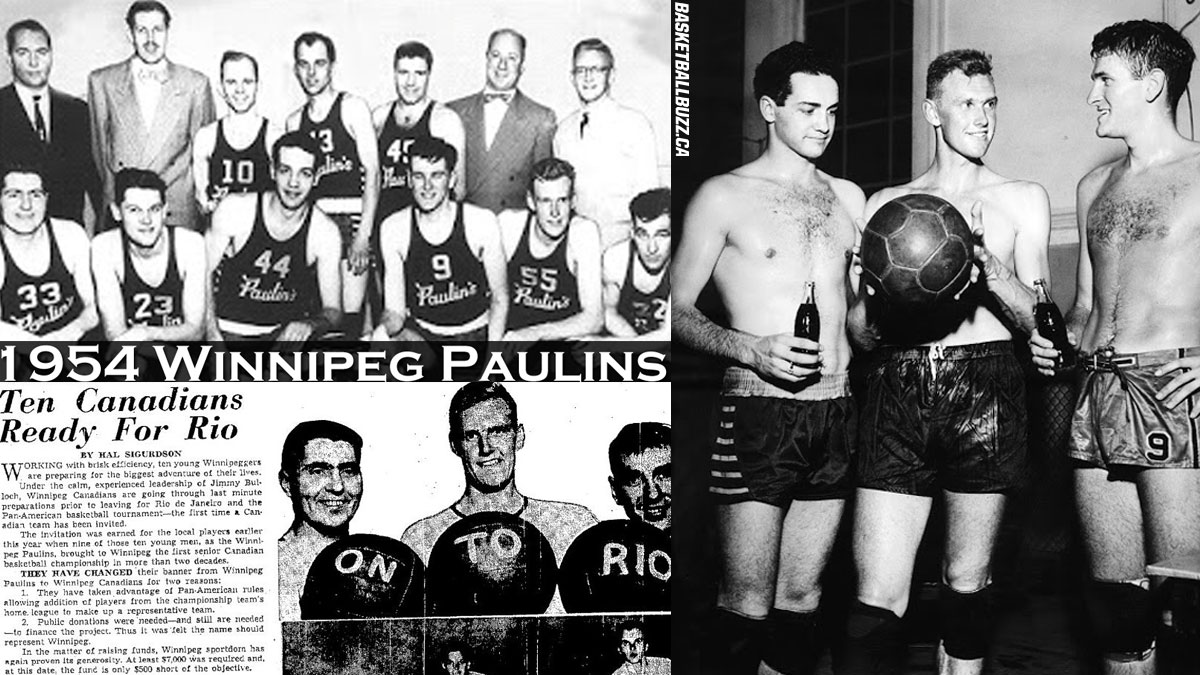 Once again Canada would not be represented by the best players available from coast-to-coast-to-coast, but by the Canadian Senior Men’s National Basketball champion, which in this case was the Winnipeg Paulins.

Paulins had defeated the host Toronto Tri-Bells in a best-of-five-series to claim national bragging rights.

Only one member of the Manitoba squad had had international experience as “King” Carl Ridd was a pickup of the Tillsonburg Livingstons who had represented Canada two years prior at the 1952 Olympics.

“We had the best three men in Canadian basketball at the time,” recalled team manager Whitey Carlson in a Winnipeg Free Press interview in 1992 in regards to Carl Ridd, Doug Gresham and Herb Olafsson. “Ridd was the top player in the country and Jim Bulloch was the best coach.”

Team USA was represented by players from the Peoria Illinois Caterpillars (Cats) also known as the Caterpillars Diesels.

The Cats were one of the most successful teams of the Amateur Athletic Union League (AAUL) in the 1950s and gained world-wide recognition at the 1952 Olympics with five of their players part of the USA men’s basketball gold medal team.

Situated in Pool B round-robin play, the USA led 33-18 at the half.

Must Read:
Harden & Westbrook Put The "Most Valuable" In 'MVP'

With their height advantage, USA dominated the boards and played man-to-man defense the entire game.

Carl Ridd replied for Canada with 11 while fouling out with five minutes to play. Herb Olafson added 8 for Canadians and also fouled out of the contest.

Canada qualified for medals pool play by dusting Peru 68-58 despite trailing 33-28 at the half.

Carl Ridd paced Canada with 25 points shooting 9-for-14 from the free throw line.

Salas had represented Peru at the age of 20 at the 1948 Summer Olympics.

Canadian guard Mike Speck, all 5-foot-4, controlled the tempo of the game with a 33-22 halftime edge.

Israel made a run in the second half outscoring Canada 15-2.

Two years prior Gresham had been offered a tryout with the NBA St. Louis Hawks. “They offered me $7,000 but I turned it down because I would have been drafted into the Korean War,” he said in an interview.

Behind 35-29 at the half, Canada switched to a zone defense and tied the game with three minutes remaining.

Parobec was an addition to the Canadians roster for the tournament but a sprained ankle would limit his playing time.

Recognized for his international stardom on the hardwood, Moglia was inducted to the FIBA Hall of Fame, class of 2021.

Trailing 42-22 at the half, Canada outscored Brazil 45-40 in the second half but it was not enough.

“Some of the boys were a little nervous when we played Brazil. We got an early lead but then they started to come back and the place went wild you couldn’t hear yourself think. We got sort of disorganized and they got a big lead,” said Bulloch.

“Brazil by the way are the best condition team I’ve ever seen in any sport. All the players were taken from their jobs for months before the tournament and were isolated. They did nothing but practice from then on. I believe this is the same system Russians used to train their athletes.”

Angelo Bonifetti and Amaury Pasos each scored 15 for Brazil.

Speaking of money….the Canadian squad had to raise $7,000 in order to make the trip to Brazil.

An alarming flight which had several players getting sick during the ride over Hurricane Hazel. A storm that had damages at $400 million (USA) and fatalities between 591 – 1,191.

Despite a convincing win, USA coach Warren Womble believed his team ,“Was too big and not fast enough for the style of basketball played.”

He continued: “Back in the USA height means a lot. Here it can be almost a handicap. Our big boys are fast but not as fast as men three to four inches shorter.”

Bertram Born Jr. paced the US with 17. George Delkers paced Canada with 18.

A 6-foot-9 all-American at the University of Kansas, Born Jr. led the Jayhawks to the 1953 NCAA championship game losing to Indiana.

Carl Ridd, who would be the second leading scorer in the tournament at 18.2 points per game, was held scoreless.

Canada was then dumped 83-76 by the Philippines after trailing 41-35 at the half.

Using a “fast low passing attack”, Formosa was led by James Yat with 18. Formosa hit 28-34 from the line.

Such was his prowess on the basketball court that Ridd was offered a contract in 1952 to join the Milwaukee Hawks of the NBA.

Once again Carl Ridd was brilliant at the free throw line hitting 14-16 along with four field goals despite being double-teamed.

Ridd would shoot double the amount of free throws than any other teammate in the tournament, making 68-of-97. Doug Greshman was next at 24-for-47.

Greshman would finish seventh in tournament scoring at 10.8 PPG.

Ridd would be named to the second team all-star.

Canada would finish 7th in the 12-country tournament which was captured by the US, topping host Brazil 62.41. The Philippines returned to national glory by placing third with a 67-63 victory against Uruguay.

In a 1954 interview, Canada head coach Bulloch looked back on the event: “Of the eight teams that made the championship round, I would say that United States and Brazil were definitely the best. The other five, Israel, Uruguay China, the Philippines, France and us, Canada, were all even and if they were to play often, we would probably beat one another.

“With a few breaks, I honestly believe we could’ve finished third in the tournament but I’m certainly satisfied with the performance of the boys. Canada didn’t even make the championship round in the 1952 Olympics.”Jimmy Bulloch – Canadian Head Coach, 1954 FIBA World Championships Head Coach