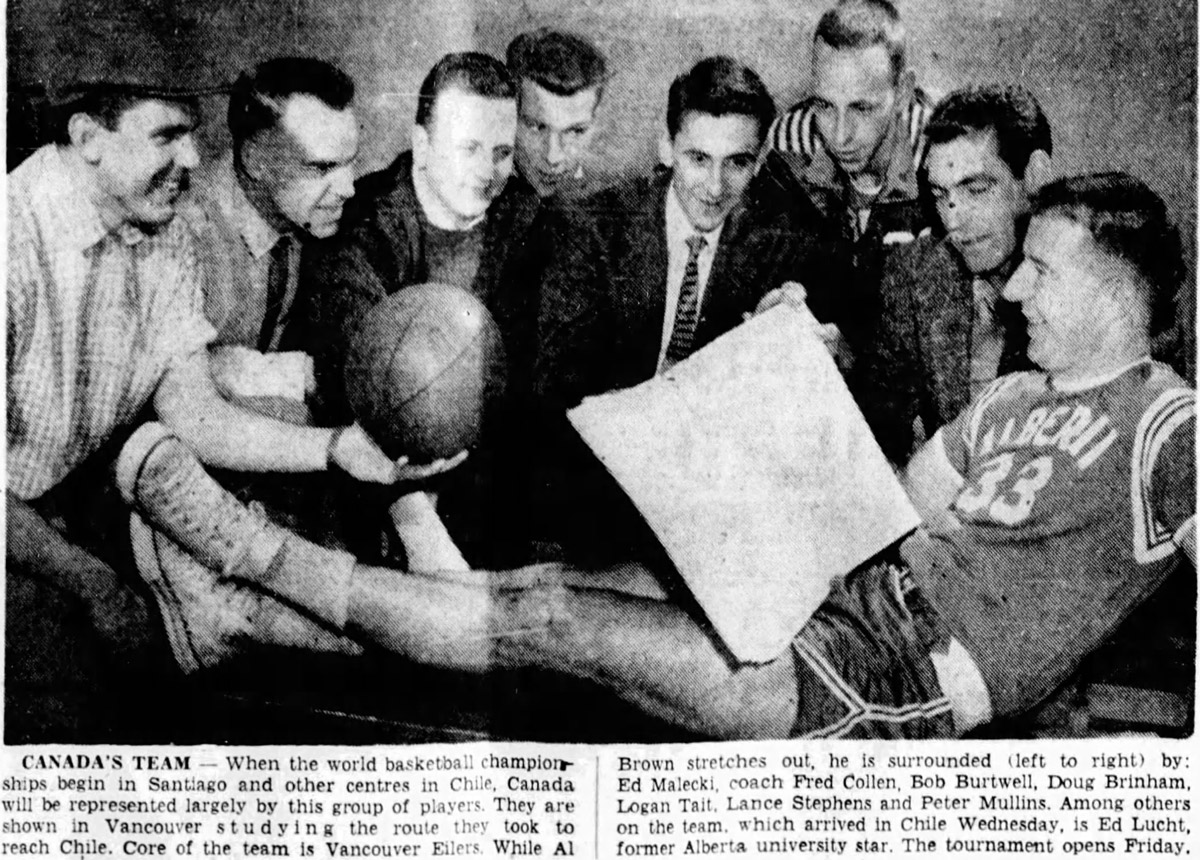 Heading to the 1959 FIBA World Championship in Temuco, Chile the Canadian men’s basketball representative was already under the gun for the selection of the team roster.

Lance Hudson coach of Canada’s squad at the 1956 Olympics said this of the 1959 assembly: “This is the worst team to ever represent Canada in international competition.”

Mullins had also competed in the 1948 Olympics but as a world-class decathlete placing 6th overall while representing Australia.

But missing from the competition, slated for January 16-31, 1959 was Bob Pickel.

“How can the Jewelers have any success in world play without Pickel, a player considered by many “experts” including himself, as the best in Canada,” wrote Vancouver Sun columnist Dick Beddoes.

A few weeks prior to heading to Chile, Canada lost an exhibition game to the Seattle Kirks 90-76.

Seattle sponsor Bill Kirk remarked, “Our club doesn’t even rate with the U.S. team which will compete at Chile. And I believe the Philippines have a better entry than Canada at the moment. We beat then (Philippines) twice by close scores but they showed us a smoother working and much more rugged team than Canada did tonight.”

Collen responded: “We picked this team as best we could to get fellows who could get along well together. We are hoping that in the time we take making the trip and in the two days we’ll have there before the tournament starts, that the boys will weld together in a smooth-working unit.

“If they don’t, then we’ll probably do about what the Canadian team did at the 1956 Olympics (9th).  All I can say is that we will do our best. But we definitely did not get any break with the draw.”

He ended his comments by saying: “Frankly, I think we’ll make a lot of people eat crow.”

The trip would be sponsored mainly by Bill and Walter Eilers.

Brazil held on to a 30-24 halftime lead to win with Waldemar Blatkauskas and Edson Bispo Dos Santos each scoring 18 for Brazil.

The Brazilian coach said the Canadian team “was good but slow and laborious.”

“Lance Stephens was called the “Pied Piper of Chile”. Thousands – I mean that – thousands of kids followed us around asking for autographs,” recalls teammate Ed Malecki. “When the people found out that we were from Canada, they just couldn’t do enough for us. I don’t know what it was, but the people in Chile didn’t like the Americans at all.”

John McLeod with 15 points for Canada and Armando Herrera with 16 points for Mexico.

McLeod, who would suffer a bruised hip in the next day’s game against Russia, would announce his retirement a few weeks later.

“It isn’t an easy thing. Basketball has been a great part of my life. I felt I wouldn’t reach my peak for another two years (he was only 25) but it isn’t worth hurting my ankles anymore.”

Beating the Russia team 63-54 was one of Canada’s highlights in international play to this date.

“I didn’t think we could do it, but we out fast-breaked the Russians,” said Malecki. “What really eat them though, was the zone defence we used. They didn’t know what to do.

“They brought 11 players and 10 brain-washers with them. And practice. They practiced for two hours the day they played a game.”

Lutch came up big with 20 points. Valdis Muzhnieks responded with 11 for Russia.

Despite the two wins, Canada would not advance to the medal rounds as they were eliminated on total points Russia 229, Brazil 210 and Canada 169. All three teams had two wins and a loss.

Realizing that they would not advance, several Canadian players “openly wept” after the victory over Russia.

Walter Eilers sponsor of the team said, “I’m thrilled with what they have done. I’m satisfied now even if they don’t go any further. Of course it would be nice if they went to consolation round.  I see that they are thinking of giving Canada a buy to the final round for the Olympics. What the boys have done down in Chile has put Canada on a higher plane in basketball.”

Must Read:
The Miami Heat Say 'Thank You Chr1s' With Rafter Raise

Antoine Musillia was the big gun for UAR with 27 points. Canada had four players in double figures led by Brinham at 18 points.

Outscored 48-32 in the second half, Canada lost despite having a balanced attack with five players in double figures, McLeod the high man at 13. Carlos Loyzaga  and Constancio Ortiz had 21 and 20 in the win.

A two-time Olympian, Loyzaga is considered to this day as one of the “greatest Filipino basketball players of all time.”

His finest moment was at the 1954 FIBA World Championship where he led the Philippines to a bronze finish.

Burtwell with 11 points in a balanced Canadian attack that had three other teammates scoring 10 points each.  Canada had led 33-25 at the half. Edmundo Marquez responded for Mexico with 15 points.

Burtwell was a five-time National Champion with UBC Thunderbirds and the Vancouver Clover Leafs. He was also on Canada’s men’s basketball team at the 1956 Olympics.

Canada would place 12th overall in the 13 team tournament.

Despite standing 5-0, the Soviet Union team never advanced to the finals. Refusing to recognize or play Formosa (China) , FIBA ruled that the USSR and Bulgaria would forfeit their games to Formosa and be ineligible to compete in the remainder of the competition.

Brazil would finish first while the United States finished second.

Initially, the U.S. had declined to participate as it the event was held during the regular season for colleges, but after being told this would ruin the competition, they agreed to send an Air Force squad.