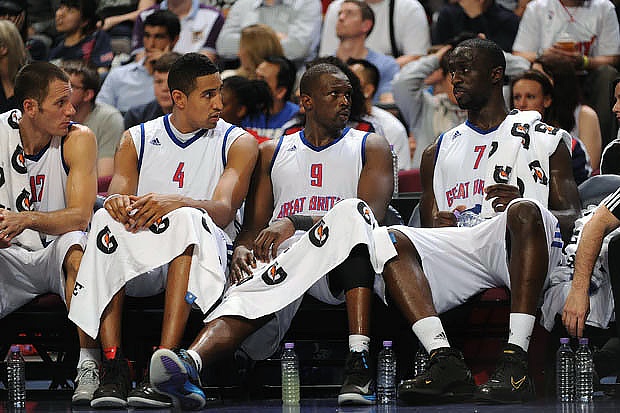 As this article is being written we are mere hours away from one of the opening highlights of the 2010 South Africa World Cup. England are about to take on the USA in a football…excuse me, a soccer game. The anticipation is at a fever pitch.

Despite the strides that the USA has made in this sport over years England still appear the favorite to win this game. They have the talent, the history and the experience. England should not simply dismiss their opponent however as the US do have more than a decent chance. A couple years back however this would have been a different story. So these days’ clichés may not have completely worn off but there certainly getting old. Americans can play football and Englishman can ball.

Believe it or not but it’s true, neither country may be dominating these respective sports but they are definitely improving fast. The English basketball league is improving by the year and the recent champions the Everton Tigers (Under the same umbrella as the football team Everton) even made it into American basketball magazine ‘SLAM’.

The big focus in the UK however is the national side ‘Team GB’. Especially with the next Olympic Games being held in London in 2012. The team is looking very strong right now with a decent pool of talent. This team has come a long way from the days when their most famous player was John Amaechi, who over recent years has become more infamous for his ‘coming out’ book rather than the talents he had as a player. Thankfully these days the reason British basketball is getting exposure is due to what is happening on court.

The talent is leaving fans drooling at the mouth more than Beethoven (the dog from the movies, not the composer) and Glen Davis combined. The anticipation is so big that the team’s official webpage is named www.gameongb.com. The reason that this anticipation is so high could have something to do with the fact that the team features two prominent NBA stars who have declared that they will play for both club and country, Luol Deng and Ben Gordon.

These are two guys that are not only former teammates and players experienced in winning big games they are also real, developed talent. They are guys that Team GB doesn’t have to wait on; they are already big time contributors. Gone are the days where British fans would hang on to the little British ties stars had like Steve Nash’s family roots or the fact that Ray Allen spent time in Ipswich. British basketball finally has its cover stars.

Luol Deng, born in Wau, Sudan but of British nationality after emigrating to Brixton has been the ‘new’ poster boy of British basketball for some time now. He has climbed up the Chicago Bulls ranks past players who at first where seen as guys who would leave this dynamic forward languishing on the bench.

He has spent year after year in the NBA whilst withstanding consuming injury and international duty to craft himself as one of the top tier talents in this league in scoring and all, round play. He even spearheaded last years NBA Europe Live exhibition game featuring his then victorious Chicago Bulls against the Utah Jazz in London. In this game he displayed his talents and leadership for not only his team but his country. He did this in front of his hometown fans from Brixton and other corners of London and the whole world watching on TV.

Ben Gordon, who was Born in Britain and has dual citizenship with the US may no longer be playing alongside Luol in Chicago but the experience he garnered doing this will pay off in dividends for him and his former running mate and more importantly his national side. Ben was a big time player in the Chi. He was and still is quick, clutch and savvy.

Alongside Deng Gordon was one of the Bulls premier go to guys leading the stampede. His charges included making dangerously deep shots and forceful aggression at the basket. Even in his rookie year Gordon was so hot that Chicago was almost declaring that there was a new Benny the Bull in town. Ben’s college experience with the University of Connecticut’s NCAA Championship team gave him veteran confidence in his first year.

We all remember his teardrop against the Knicks. These days Ben has been given the responsibility as one if the main Pistons motoring forward the new, rebuilt Detroit franchise. The location may have changed but the game hasn’t. Ben Gordon is still one of the freshest, developing talents in the league.

Must Read:
Will The Purple Heart Of Kobe Bryant Ride Off Into The Rio Sunset With Olympic Gold?

So in this Team GB set Luol will be the ‘franchise’ guy leading the way on the court and in the team’s heart. Ben will be more than ‘the other guy’ or ‘the co-pilot’. He’ll be the big time scorer and more importantly the clutch player, which in international competition against talented teams such as Spain and Argentina could be decisive.

Head Coach Chris Finch and his assistants Tony Garbelotto, Tim Lewis and Nick Nurse have there sights set on a new beginning for a team who only ever made the Olympics once in 1948. The interesting thing about this team is that even as the host nation for the 2012 Olympics their place isn’t guaranteed. They have to prove their competitiveness to FIBA, the international basketball federation. From the looks of things this team looks ready to prove themselves.

The Eurobasket 2011 qualifiers this August will prove a big enough stage for this British team to prove if they are worthy enough for the European stage let alone the world, Olympic stage. Lead by two NBA go to guys with renewed focus and motivation behind them this team looks ready to given it everything they have. Which, by the looks of it appears to be a lot more than most people think.