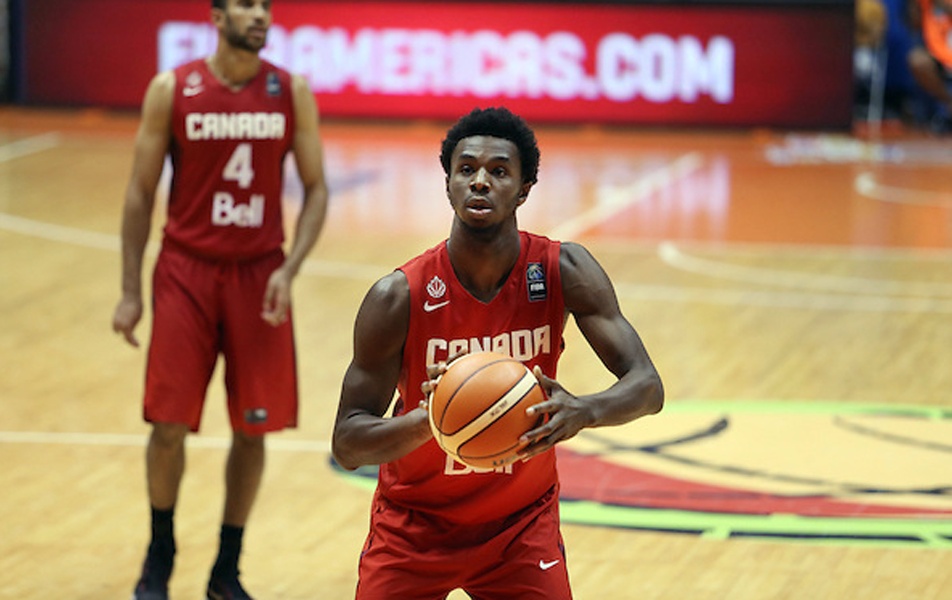 Head coach Jay Triano who guided Canada to a Silver Medal at the 2015 Pan Am Games on home soil (Toronto) finally unleashed “Canada’s Dream Team” to the World. The opener of the tune-up tournament for the Olympic qualifier (FIBA Americas) also featured the SMNT debut of Andrew Wiggins, who last donned the Canada Red and White back in 2012 at the FIBA Americas U18 championships in Brazil.

Wiggins wasted no time making his impact felt by scoring the games first five points on two silky smooth jumpers as Canada raced out to a 13-4 lead on the Argentinians and newly signed Toronto Raptors Luis Scola. Canada shot the lights out and found themselves up 30-23 at the end of the first-quarter on 11-of-15 (73%) shooting from the floor and 6-of-9 (67%) from the shorter international FIBA three-point line.

Wiggins finished the quarter with 9 points and with Cory Joseph (Toronto Raptors) on the sideline (veteran rest day), former Carleton Ravens standout point guard Philip Scrubb got the starting nod and contributed 5 points and 2 rebounds in the opening quarter.

Canada’s superior athleticism and overall depth started to dominate as Anthony Bennett, fresh off a strong showing at the Pan Am Games got involved in the second-quarter, scoring inside and cleaning the boards as the Canadians took control of the game including a first-half, game-high lead of 13 points at 41-28 on an Andrew Nicholson triple. Canada closed out the quarter poorly as Argentina capitalized on several avoidable turnovers to cut Canada’s lead to single-digits, 45-37 at half-time.

The third-quarter saw the physicality meter turn-up as Argentina slowed the pace, but failed to threaten, as Canada maintained a comfy 7-8 point margin, until a  6-0 run pushed the deficit to 60-45 with 1:19 remaining and an eventual 60-50 lead with one quarter to play.

Argentina slowly chipped into Canada’s lead and outscored the Red & White 16-6, forcing a 66-66 tie with 4:24 to play. The two teams continued to trade baskets and with the game up for grabs on yet another inside two-point basket by Scola and with Canada clinging to slim 79-77 lead with just 37 seconds to play head Coach Jay Triano called
a timeout.

Without any hesitation, he drew-up a designed play to get Andrew Wiggins the ball in the flow of the offense.

And just like he had done before at the U18 games in Brazil and at the 2010 FIBA World U17 championships in Germany, Wiggins delivered yet another clutch play when his team needed him most, this a time a silky smooth baseline jumper to put Canada ahead 81-77 with 26 seconds to play and earn their first victory of “Canada’s Dream Team.”

Wiggins finished with a team-high 18 points, 2 rebounds on 6-of-13 shooting and 2-of-4 from the outside. Anthony Bennett continued his stellar player over the summer by notching yet another double-double with 11 points and a game-high 13 rebounds including a team-high 33 minutes. Philip Scrubb 12 points, 5 rebounds, 3 assists and Dwight Powell’s 11 points and 5 rebounds also reached double-figures for the Canadians who snapped a four-game losing skid at the Tuto Marchand Cup going 0-4 in 2013 and enacting some revenge against an Argentina team that killed any hopes of Canada earning a shot at inaugural 2014 FIBA World Cup.

“I thought it was a good, hard-fought game,” discussed Wiggins after his much awaited debut. “It was physical, both teams played well. We’ve got a new group of guys so we’re still coming together. You can see that we’re getting more fluid with what we do.”

With 13 players on the roster Jay Triano, Dave Smart and the rest of talented Canadian coaching staff have the tough decision to cut one more player ahead of the 2015 FIBA Americas Championship. Depending how things go over the next four games Triano will have to decide on weather he wants three point guards (Cory, Joseph, Hanlan, Philip Scrubb), if not which one will back-up Joseph. Other names being carefully examined include Aaron Doornekamp and Melvin Ejim.

Must Read:
USA Continues dominance over Canada at 2013 FIBA U19 World Championships with convincing 109-67 Quarter-Finals victory

The Canadians will look to make it two in a row as they take on 2016 Olympic Games hosts Brazil in their second-game of the 2015 Tuto Marchard Cup.