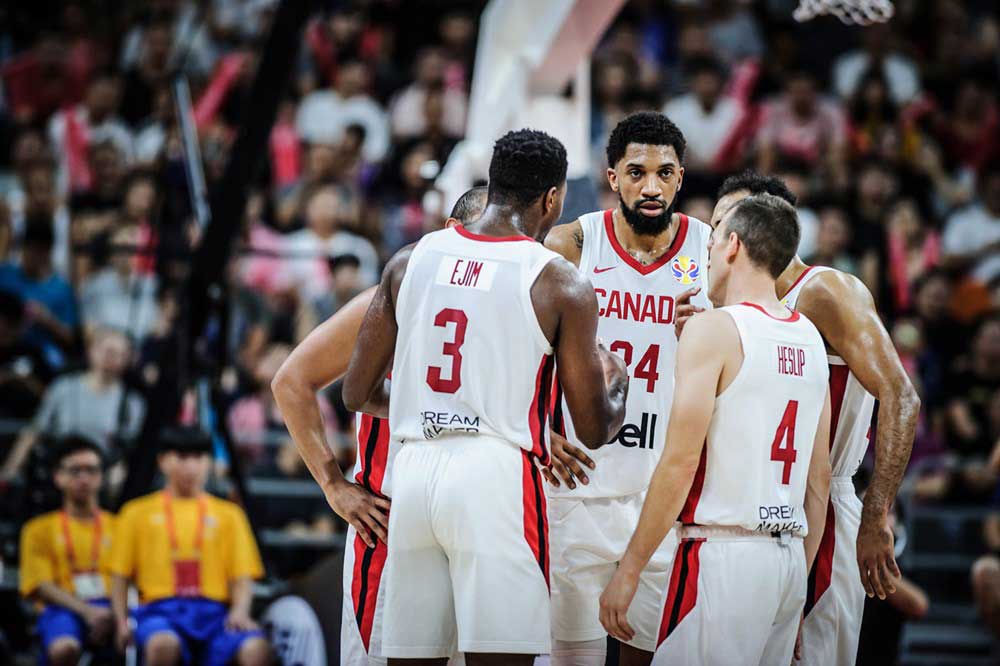 No. 21 Canada will play in tough group A in Victoria, British Columbia against No. 7 ranked Greece and reigning NBA MVP Giannis Antetokounmpo. Team Canada will also face rising No. 24 China. Group B features No. 43 Uruguay, No. 10 Czech Republic, No. 15 Turkey.

Canada will need to win the last minute Olympic qualifying tournament at home to qualify for the 2020 Tokyo Summer Olympic games.

The top two teams in each group advance to the semi-finals in a crossover game. The tournament runs from July 23-28. The top four teams from each tournament will advance to Tokyo and will join an already impressive field that includes hosts Japan, Argentina, Australia, France, Spain, Iran, Nigeria and the United States.

China also finished with a 2-3 record dropping close games to Poland (79-76), Venezuela (72-59) and Nigeria 86-73. Uruguay, the lowest ranked team of the six is the only team that didn’t qualify for the World Cup.

Despite the growing global NBA player presence – it is Canada that features the most international players in the world’s best league. After a disappointing 2-3 showing at the 2019 FIBA World Cup, Team Canada is expected to put together it’s best roster in years’ — already garnering early official social media commitments from two of Canada’s rising stars. Denver Nuggets’ Jamal Murray and OKC Thunder Shai Gilgeous-Alexander have officially announced their intentions. Dillon Brooks of the Memphis Grizzlies, Khem Birch of the Orlando Magic and New Orleans Pelicans’ guard Nickeil Alexander-Walker have also made it clearly evident that they will be on hand to help Canada end it’s 20-year summer Olympics drought that dates back to 2000.

Canada will kick-off the tournament against Greece on June 23rd and will play China the next day with a rest day in-between — before the semi-finals on June 27.

One thing to keep in consideration is the proximity of the qualifying tournament to the NBA Finals. Game 1 on the 2020 NBA Finals is set for Thursday June 4th 2020 and if stretched the distance it will run until Sunday June 21st leaving only two days before the start of the crucial tournament. Both the Milwaukee Bucks and the Toronto Raptors are amongst the favorites to win the Eastern Conference and should they reach the NBA finals it will be interesting to see how it will affect player turnout and other last minute decisions.

Canada failed to reach the 2016 Rio Olympics via the FIBA qualification tournament, falling to eventual fourth-place finisher France in a hard-fought 83-74 battle in Manila, Philippines.