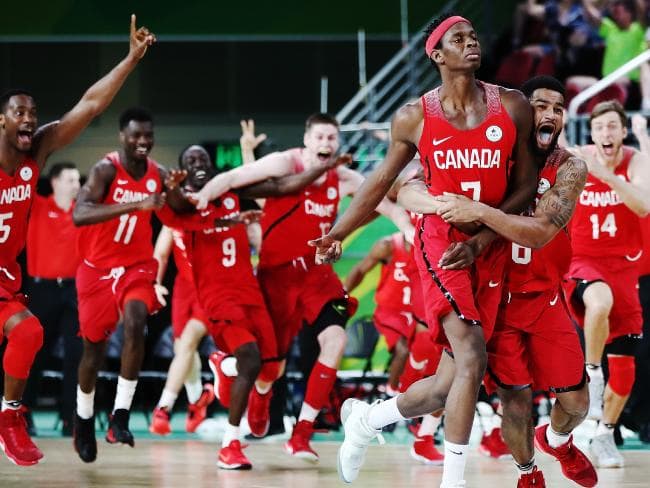 “Hotter than July” like a Stevie album may be the forever forecast in the Gold Coast of Australia right now, but after icing the semi-finals of the 2018 Commenwealth Games like birthday cakes, Canada look to bring a cold front down under. So we hope you brought your big coats from earlier this years Pyeonchang Winter Olympics. Because you’ll need them. Its time to zip and wrap it all up.

Beating the Aussie neighbouring New Zealand 88-86 at the buzzer last night, even the fear striking pre-game ritual of the haka in all it’s glory couldn’t stop the Canucks (like the hack-a-Shaq on them rare nights when the diesel was all fuelled up from the free-throw line). Because Mamadou Gueye had the sauce and the dressing, as he threw up the prayer off the glass and the basketball Gods banked an answer. His shot may have looked like one of 10 year veteran turned Laker, Andre Ingram, but it was the right pitch and strike like ‘Dre throwing the first one at Dodger Stadium the same night last. No foul ball or referee call. Far flung like a hot potato with seconds to spare in the games oven. Despite throwing it over the coat cloaked defender from way behind the line with his outstetched and contured body looking like Gueye was kick hip-checked, it was all cash off the glass as he stunted the Tall Blacks for a whole continent declaring, “We The North” like the 6.

It hasn’t been this nasty since Nash saw red maple and white, flying the flag. Captain Canada we salute you!

Making up for the Canadian womens national team, semi-final upset to number 21 world ranked Great Britain, 65-53 behind 20 from G.B.’s Rachael Vanderwal. Canada overcame a NZ off the ropes rally from 21 down and brought the knockout punch in a game that could have all gone due south like that dog Diefenbaker against the Kiwis. Now all that stands in the way of gold in the Gold Coast is host nation Australia, who sucker-beat previously unbeaten Scotland (who now take on New Jealand for the bronze podium position) 103-46, behind 17 from star Jesse Wagstaff. Not to mention the country who thrased Canada by 40 points in the pools. No shallow feat staring in the upset waters of what could be defeat.

But revenge is always a dish best served cold. No matter how long the games been on the grill.

Time to lower the boom.