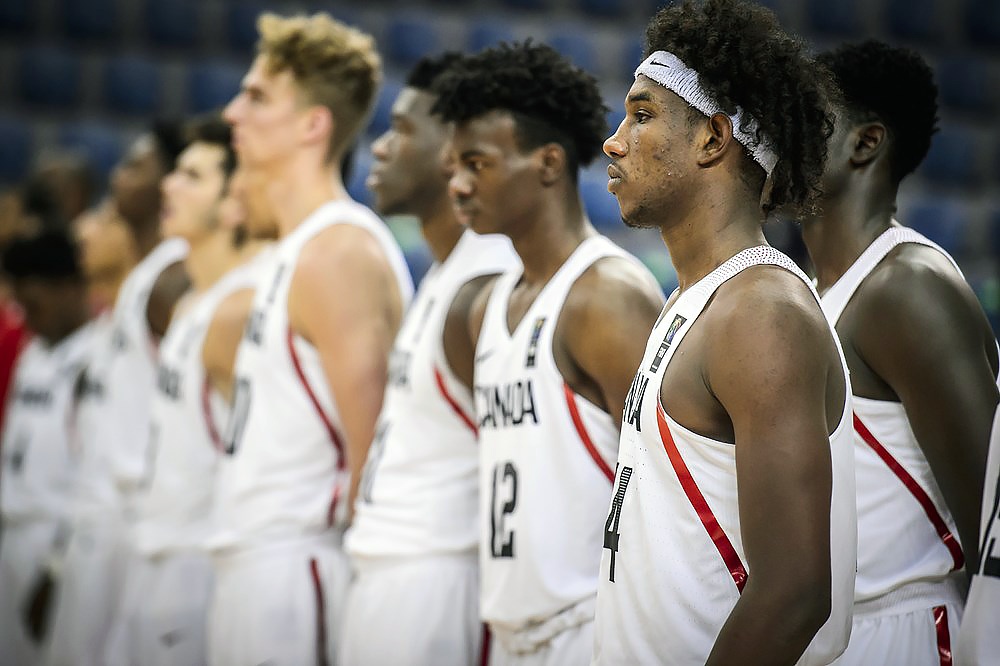 Canada’s U19 National Team hopes of a World Championship medal are alive and well at the 2017 FIBA U19 Championships in Egypt, Cairo. Canada used a big second-half to routs Angola 87-65 and advance to the last eight quarter-final round.

The Canadians opened-up the game with their best scoring quarter of the tournament, knocking down seven three-pointers in the opening ten minutes and grabbed a 30-23 lead thanks to the hot shooting Danillo Djuricic’s 12 points on 4-of-5 shooting from the outside.

Angola, the 2017 African Champions found their groove in the second-quarter dominating the Canadians on both ends of the floor. Canada was forced to drop into a 3-2 zone as and outscored Canada 19-12, briefly holding a four-point lead – their largest of the game before a late three-pointer by Abu Kigab tied it at 42-42 at half-time.

Veteran Canadian Head Coach Roy Rana dialed-up a full-court press to start the third-quarter, combined by Angola’s poor shot selection, Canada scored three straight buckets, two in the paint by Prince Oduro (9 points, 5 rebounds) to pull ahead 48-42 as Angola struggled to find their shot. After mustering only two points in the first-half Nova’s Scotia’s Lindell Wigginton started to attack the basket and helped Canada push the lead back-up to nine points at 54-45 forcing the African champs to call a time out.

Canada’s defence held Angola to just three-points with 2:09 to play in the quarter, before five quick points by Angola closed the gap to 64-50 with one quarter remaining. The route continued in the final frame with Canada limiting Angola to 15 points for a total of just 23 second-half points compared to 45 by the Canada.

Angola’s Silvio Sousa, a future rising star for his country with NBA potential finished with 18 points and nine rebounds including three rim rocking dunks. Prior to this game Canada and Angola had only faced each other on two previous occasions, back at the 1983 World Championships in Spain (Angola 84 – Canada 61) and the 1991 world championships with Canada winning 91-65 on home soil in Edmonton, Alberta.

Canada finished fifth at the 2015 U19 Championships in Greece with a roster that featured Dillon Brooks (Memphis Grizzlies/NBA), Justin Jackson (Maryland Terrapins/NCAA).

Canada (3-1) will now face the winner of France versus Puerto Rico in the Quarter-Finals on Friday, July 7th.