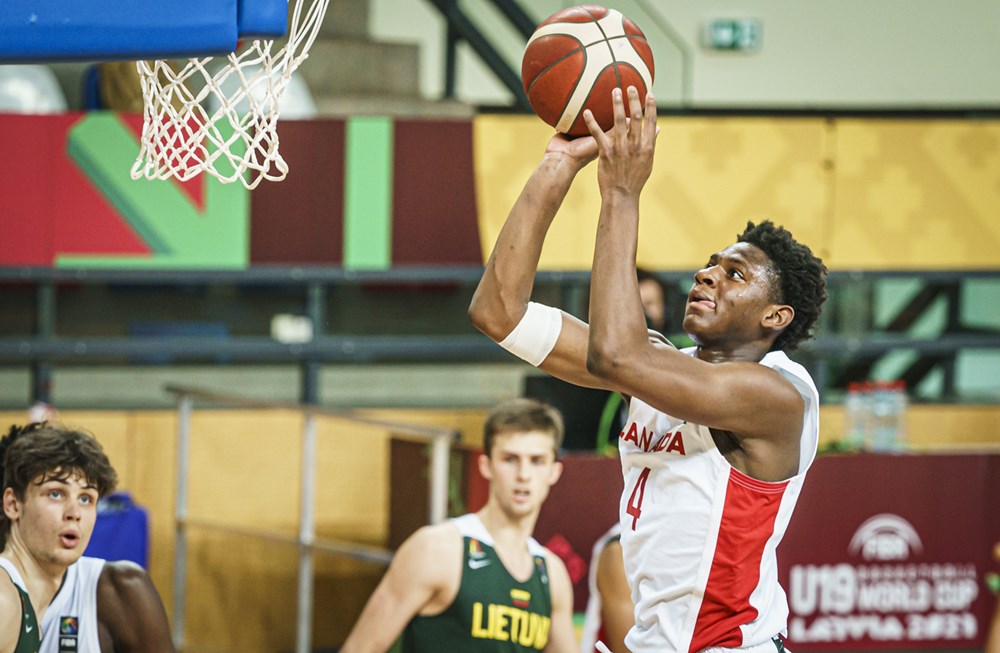 The FIBA U19 Basketball World Cup has proven to be fertile ground for some of Canada’s brightest stars to shine and make a name for themselves. Over the years names like Tyler Ennis, Andrew Wiggins, Trey Lyles, RJ Barrett and countless others improved their stock by showing out in front of a global audience.

Sparked by the play of two high school teammates and national champions, No. 2 FIBA-ranked Canada fought-off a pesky fifth-ranked Lithuania squad 80-71 to earn their first win of the 2021 FIBA U19 World Cup in Latvia.

Trailing by 14-points, at 48-34 with 7:17 to play in the third-quarter, a deficit easily attributed by a dismal shooting display and turnover infested first-half, Team Canada outscored Lithuania 48-29 the rest of the way to pick up their first-ever win over the basketball crazy European nation. Canada previously dropped games to Lithuania dating back to 2007, 2011 and 2013.

Canada rod the early and steady hot hand of six-foot-eight shooting guard Caleb Houstan, got an explosive performance from young 17-year-old phenom Elijah Fisher, maximum rebounding effort from Zach Edey and closed out the game with the clutch shooting and play making ability of Ryan Nembhard.

Houstan and Nembhard scored a team-high 18 points to lead four Team Canada players in double-figures. Nembhard scored 12 in the last 2:50 of the game to lift the Canadians to the seven point win over the Lithuanians. Houstan helped Canada stay in the game with 13 first-half points as Lithuania drilled 7-of-17 three-pointers to take a 42-32 half-time lead.

“We got a lot of guys who came off the bench and contributed, and I think that’s a good testament to our team. [The ability] to push through against a real good team. We were down most of the game and came out with the win,” said Houstan.

Zach Edey (Toronto, Ont.) grabbed ten (10) first-half rebounds and finished with a large-size double-double of 12 points and 16 rebounds on 5-of-9 shooting. The seven-foot-four center logged 29 minutes, earning more playing time than any game he played during his freshman season with the Purdue Boilermakers.

“This was the perfect first game for us,” Head Coach Paul Weir said. “We were challenged by a great opponent in Lithuania, and it tested our team in many ways. To fight back and earn this victory is a great testament to a terrific group of players and staff I feel blessed to be leading right now.”

Playing his first game in a Canadian uniform, 17-year-old rising star Elijah Fisher came off the bench to score 11 points, four (4) rebounds, two (2) assists. The top ranked Canadian basketball player in the class of 2023 added one steal and threw down his first of many memorable FIBA international basketball poster dunks.

Fisher, a catalyst that ignited Canada’s comeback, finished the game shooting 5-of-9 from the floor and attacked the paint at will while showcasing his defensive ability. The Crestwood Prep guard finished the contest with a plus-minus (+/-) rating of 26, the highest of anybody, not only on the Canadian U19 team, but the entire game. Fisher also had an efficiency rating of 14.

Nana Owusu-Anane provided a spark off the bench, chipping in with six (6) points and four (4) rebounds in 23 minutes. Bennedict Mathurin contributed with 4 points, 5 rebounds but struggled to find any rhythm in a 1-8 shooting debut.

Lithuania’s Azuolas Tubelis lit-up Canada with sixteen (16) first-half points and eight (8) rebounds on 7-of-11 shooting. Tubelis a sophomore teammate of Mathurin with the Arizona Wildcats finished with a game-high 32 points, 12 rebounds, 3 assists, 3 blocks on 14-of-18 shooting and 2-of-2 three-pointers.

Mantas Rubstavicius was the only other Lithuanian player in double-figures with 15 points and 5 rebounds.