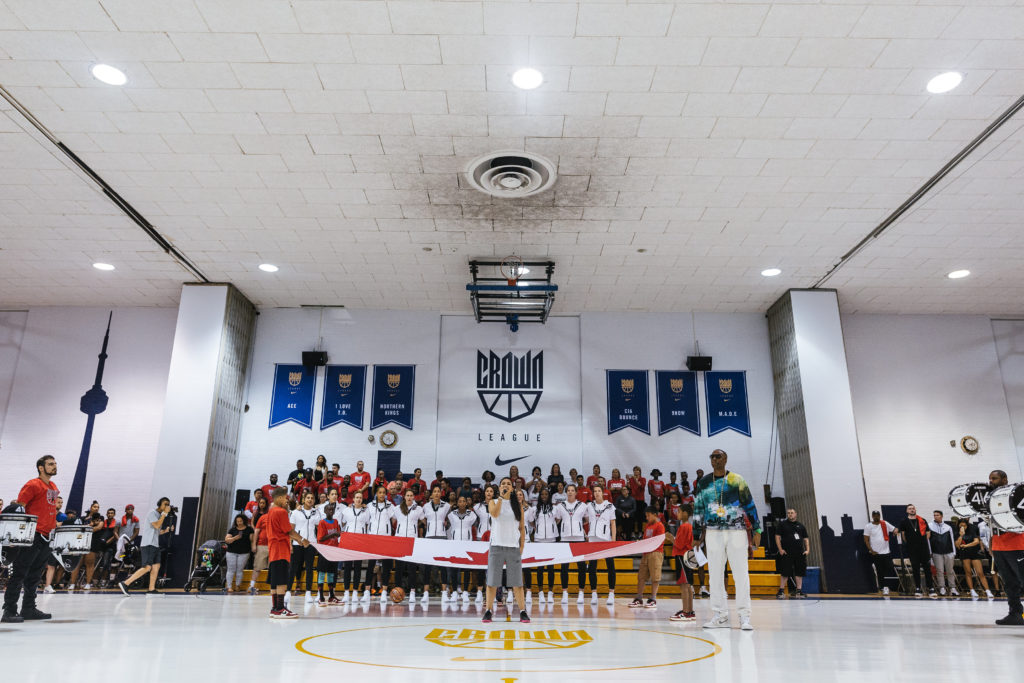 The fourth week of another anticipated fun Friday came with more excitement and cheer than the Nike Crown League has ever heard! The line-up to get in-to the gym at Ryerson’s University Kerr Gymnasium was full as always – The gym was loud and the fans were energetic right from the first tip-off.

Two-time NBA champion Joel Anthony played in the opener marking yet another NBA player who has participated in the Nike Crown Tournament; he brought nothing but toughness and hustle on both ends of the court as he finished with 8 points, 7 rebounds and 5 blocks. Unfortunately for Joel Anthony’s M.A.D.E it squad it was not enough; they came across another pro player in Brady Heslip who stole the show during the first game of the night! The former Baylor Bear has played his last few seasons in top professional leagues in Europe. He demonstrated his phenomenal skill-set as he erupted with a game-high of 28 points leading LoveTo to a 70-68 win. The game ended with a miss buzzer-beater that would give M.A.D.E the win had it gone in. This left fans in awe, knowing that they we’re in for another ‘Good Friday!’

Last Friday was indeed a ‘Good Friday’ for the city of Toronto, but an exceptional one if you came to the Nike Crown League. Fans we’re loud enough after the first game was but they got even louder a few minutes after the first game ended. Akil Augustine from Raptors TV informed the fans that there was a special surprise on the way. Fans were left confused up-until Toronto’s hip-hop legend Kardinal Offishall came out full-of-joy, preaching to the fans about how proud he is that everyone has gathered up together and that basketball is being showcased at a high level in the city of Toronto. Most were expecting Kardi “The Official Bacardi” Slanger to drop one oh his patent hype performances, he surprised everyone by introducing a special group of Ladies. Leaving everyone shocked, and left thinking again who the other special guest might be.

Kardinal made it clear as to , they deserve it as they will be representing each and every one of you,” said Kardinal. Right after, The Canadian Women’s national basketball team came out with a Drum band, coaching staff and a BIG Canadian flag. This was a very special moment as the Nike Crown League fans got to celebrate history with the phenomenal women’s who will be representing not just a team, or city but the whole country in the 2016 Rio Olympics.

The Olympian women stuck around for the games after their celebration. However, they stole the show and attention from the other games remaining as all eyes went on them. They also stole practically every kid from their parents as almost every little kids were eager to sit beside them and take pictures. The Canadian Women’s stood there class-fully and took numerous pictures with everyone who asked and opened their sections to sit with everyone. Overall it was a remarkable Friday and the fans will not be forgetting that day anytime soon.

The growth in Canadian basketball seems to keep getting better and better! Buckle your seat belts Canadian basketball fans, the basketball scene in Toronto has been growing at a very fast paced this year with the All-Star weekend and the Raptors success. There is still much in store! The six teams, six weeks in the six will finally conclude in couple weeks to see who will be this year’s Nike Crown League champion. There is also the OVO bounce coming next weekend, the Jane & Finch Classic and the Phoenix Classic the weeks after. So basketball fans prepare to conclude summer with the finest basketball tournaments the city has to offer. Despite the chances of seeing another heartfelt celebration like the one on Friday for the Canadian Women’s National basketball team being slim. It does not mean the gyms won’t continue be loud , it is for sure  that fans will still be jumping out their seats for the rest of the summer basketball showdown. Plus the whole country will all cheer & celebrate the Canadian Women’s national basketball team success together!