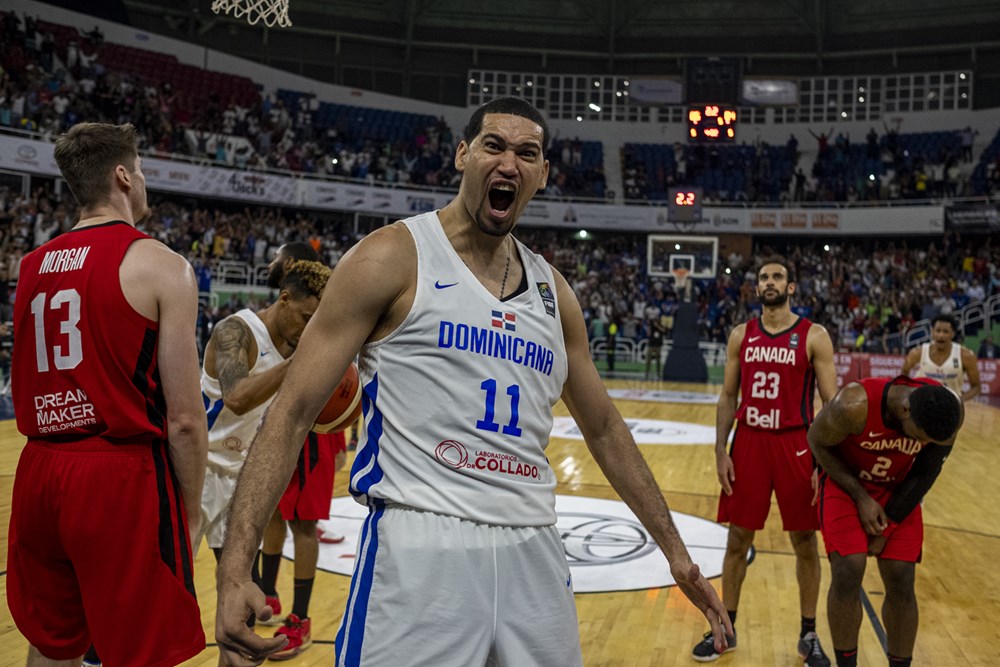 Multiple ties and a total of twelve lead changes turned up the energy as both teams exchanged jabs in an exciting fourth-quarter. Trailing 75-73 with five seconds remaining in regulation — after the Dominican Republic failed to ice the game at the free-throw line, Canada appeared to have won the contest with a walk-off game-winning three-point shot by Conor Morgan that sent the entire team running off into the tunnel for a jubilant locker-room celebration.

The euphoria quickly ended and the celebration halted as the referees reviewed the shot and confirmed it as a two pointer — overturning a correct call that sent the game into overtime after a 75-75, 40-minute deadlock.

The referee, standing within three-feet of Morgan, and with clear 2020 vision lifted her hand to signal a three-point shot, but for some odd reason changed her call. Further video evidence shot by a fan sitting courtside clearly showed, and confirmed that the Canadian player was indeed behind the three-point line, albeit being extremely close.

Canada failed to match the Dominican Republic’s intensity early on and trailed 18-9 with 2:01 to play in a physical, foul-plagued, slow-moving first-quarter that finished with the home team ahead 22-16 after 10 minutes. Overall the Canadian’s shot just 3-for-12, turned the ball over six times but stayed within striking distance thanks to 9-of-12 free-throws.

The whistles kept on coming, the fouls started to pile-up and the pace turned to a snails’ race as both teams struggled to get anything going in the second-quarter. Canada’s Aaron Best acrobatic layup and thunderous inbounds alley-oop energized Team Canada. A late Dominican Republic triple maintained their six-point cushion with a 39-33 half-time lead in a evenly played 17-17 quarter.

The late arriving home crowd continued to fill the Palacio de los Desportes arena just in time to see the local team extend the lead to a game-high 10-points with the scoreboard showing 50-40 with 3:09 to play in the third-quarter.

Philip Scrubb (Richmond, BC) quickly shifted the momentum in Canada’s favour with a personal 9-0 run on back-to-back triples and an old-fashioned hoop plus the harm three-point play forcing a Dominican timeout. Canada extended the run to 12-0, contributed by poor-fouling shooting by the Dominican Republic to take a 52-50 lead.

With the game hanging in the balance in the extra session Luis Montero drilled a clutch spot-up baseline three-pointer to give the Dominican Republic a 86-82 edge as they hung on for the thrilling overtime win.

Scrubb finished with a game-high 26 points on 6-of-13 field goals, 4-of-9 triples and 10-of-13 free-throws. The CD Estudiantes guard of the Spanish Liga ACD added 6 assists, 2 rebounds in nearly 40 minutes of game action. Kaza Kajami-Keane (Ajax, Ont.) hit some big shots and finished with 15 points, 7 assists, 4 rebounds and Aaron Best (Toronto, Ont.) was great with 15 points, 3 rebounds on 6-of-11 field-goals and 3-of-7 triples before fouling out.

Andrew Nicholson failed to find any consistency and fouled out in the three-quarter with 7 points and 6 rebounds. In total four Canadian players were disqualified as Canada was called for a total 32 team-fouls.

Eloy Vargas once again was the top player for the Dominican Republic with 16 points and 5 rebounds. The veteran 6’11 forward and former Kentucky Wildcat had and outstanding showing in the opening window of the 2021 FIBA Americas qualifiers. Rigoberto Mendoza added 12 points, 4 rebounds and Gelvis Salon stuffed the statsheet with 10 points, 8 assists and 6 rebounds.