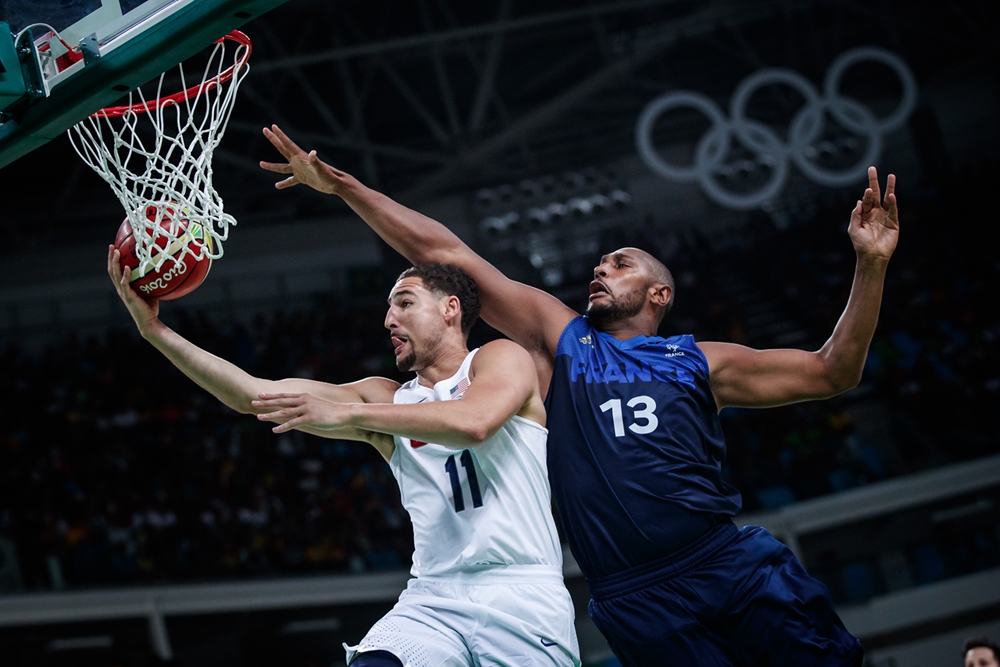 Obviously the Olympics are about more than one sport. Just watch what the G.O.A.T. Usain Bolt-the Ali of the track-has just done in less than ten seconds for the third straight Olympia in an 100 meters that was essentially his victory lap. But you have to love how Basketball is being represented in Rio and how competitive all the countries are here in Brazil. Showing the game is much more than one nation or gender. You can see the passion of the fans and their flags around the world! Lets keep them waving like the flame lit.

That being said the globe and this game may be coming closer to the peach but the U.S.A. are still president in this contests campaign. Despite critics trying to give this former Dream Team nightmares. The likes of Kobe and LeBron from London’s 2012 may be gone and Steph Curry may want to set the table for his first games in Japan for 2020, but we still need to hear it for the likes of biggest superstar of the moment Kevin Durant and four time Team USA Olympian and point leading record holder Carmelo Anthony.

Sure people have said what they will about the U.S. squeezing victories out of Serbia and Australia but as they say in the ‘Fast and Furious’, “it doesn’t matter if you win by an inch or a mile…winnings winnings”! Besides did you not see how America handled the Peoples Republic of China by the biggest margin since 1992 (57 points) or an impressive Venezuela all whilst still staying in second gear? Just wait until they hit the nitrus and quarters and less than four games less for what new Golden State Warrior Durant dubs “Game 7’s” from here on out.

The U.S.A. aren’t getting worse. Just like a small ball revolution the game is changing and the rest of the world are just getting so much better.

This is a time where even the silver, second best Spain are struggling and the likes of host nation Brazil are surprising everyone by taking South American neighbors Argentina to two thrilling overtimes before they got taken to the woodshed.

One criticism that has seemed valid was that of Warrior Splash Brother Klay Thompson, who seems to have been shooting in the shallow end here in Rio’s beaches. Until now for this preliminary round he has been more ‘Clay’ Thompson, shooting just 15%. Yeah we’ve been letting him hear it, but we just wanted him to respond.

And boy did he!

Pure shooters will always hit funks, but when they find their range it just opens everything up again. Thompson had been hitting so many bricks he almost broke the backboards glass but tonight it was Klay day again…and you know every one of his band of Team USA brothers were celebrating courtside. It was Showtime for Mychael’s kid as he was everywhere. The baseline. The NBA three point line. So downtown he was in the favelas. Back in the stands with the fans taking selfies and other peoples corn condiments. Thompson was popping. Even hitting a shot clock, off balance fadeaway three like it was a free throw, as it went in and out round the rim, around the whole word. Even stopping off in Tokyo to check out the next games where he’ll be before coming back down to earth with…yep you guessed it, a splash!

Klay’s 30 points lead the United States team to a 100-97 win over France. Aptly beating the Tony Parker rested nation by a 3-ball. Although the U.S. and K.T.’s dominance spoke volumes that the box score couldn’t equate in statistics.

The contest that was opened on a Cousins dunk in relation was punctuated by a rival play as an off balance Cleveland Cavalier champion Kyrie Irving made an impossible alley-oop assist whilst falling down to future G.S.W. rival Kevin Durant for the exclamation dunk.

There’s no more questioning the marks Team USA left after they exited the group stages 5 and 0 like their sisters in the women’s game. Nobody is taking a back seat in the knockout stages now. Even ‘Mr. Game 7’, Kevin Durant needs his ‘Mr. 4th Quarter’, Klay Thompson.

What will they dub the state of these Warriors now?