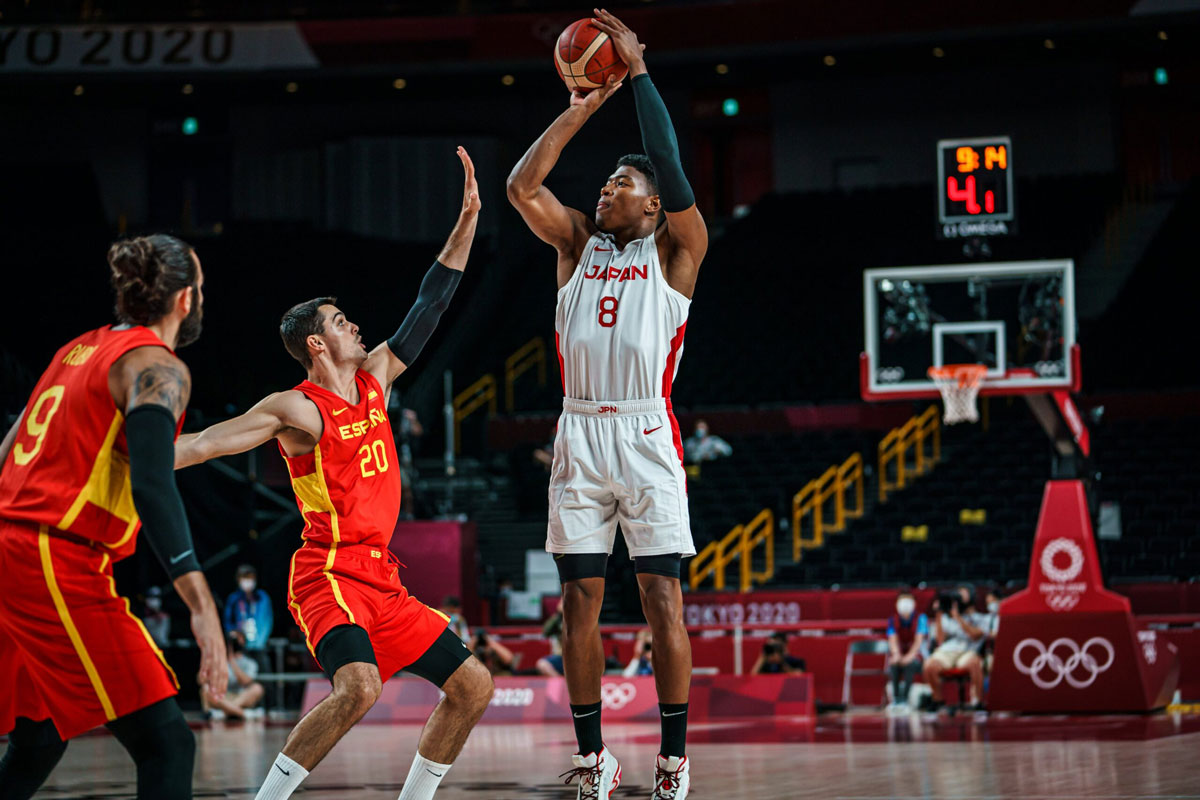 In the land of the rising sun for Tokyo 2020, Japanese basketball is on the rise.

There’s two NBA names who are making Far East hoops revolve around the whole world like a ball on the tip of their fingers. The future of the hardwood belongs in the hands of the Washington Wizards’ Rui Hachimura and the Toronto Raptors’ Yuta Watanabe.

One a former top ten rookie draft pick, now a sophomore star. The other a man who has rose from the G-League and 10 day contracts to earn a permanent place in the association.

Tonight both men balled out against the most legendary Olympic team outside of the US in Spain. As a matter of fact on paper THE most legendary one with most of the members still on court trying to bring home even more FIBA gold.

Spain have the Gasol brothers. Both bigs making huge plays in the heights of the paint and giving us that reunion we didn’t see in Lakerland, but may see in Barcelona next season sweetly. Although we hope the hustle and heart of Marc Gasol’s passion and power gives the Lakers another Mr. Wolf favour next season…they sure as hell need it.

But Japan have the future in Rui and Yuta and even more like point dynamo Yuki Togashi. Legendary for leading his Chiba Jets to B-League glory this season.

Hachimura had 20. Watanabe, 19. They both hit big threes down the stretch to break the Spanish bulls’ blowout. Driving to the paint they also threw it down (THROW IT DOWN!) with some defining dunks which would have had everyone in attendance at the Saitama Super Arena out their seats.

Although barely any were or are filled in these Olympics due to COVID-19 keeping everyone at a social distance. This wasn’t like the time the Raptors faced the Houston Rockets here for an exhibition in 2019 with everyone in the house. Including BasketballBuzz.

Even that won’t stop a great games though with basketball right now breaking down barriers. From the brand new 3×3 tournament earning its concrete place as an Olympic sport like skateboarding with some exciting contests. To even the mighty Team USA showing that they better stop dreaming before they will be in need of redeeming again. Otherwise no one will be singing like it’s Kevin Durant’s birthday.

A 19 point run by the Spaniards was just too much out the gates though. Marc Gasol (12 points) was gassed up from the start, mixing and matching his diverse inside/outside game to defy critics who thought he and the rest of his storied Spanish team were too old to get it done. Pau provided power too (8) whilst shouting “VAMOS” at his teammates as Ricky Rubio set the table, running point with 20.

In the end 88-77 looked respectable in terms of who the Japanese were facing, but less like how the game almost turned out with the host nation rallying like Naomi Osaka behind Rui and almost taking it in Tokyo.

Against not just a great Spanish team, but one of the best international teams of all-time.

Spanish red may have set on Japan’s sun tonight, but from here on out the future of Japanese basketball and the Akatsuki Five is looking as bright as Tokyo skies in twilight.

Bloom City is opening up like flowers this spring season with some blossoming cherry capital city jerseys for the Washington Wizards and Nationals basketball...