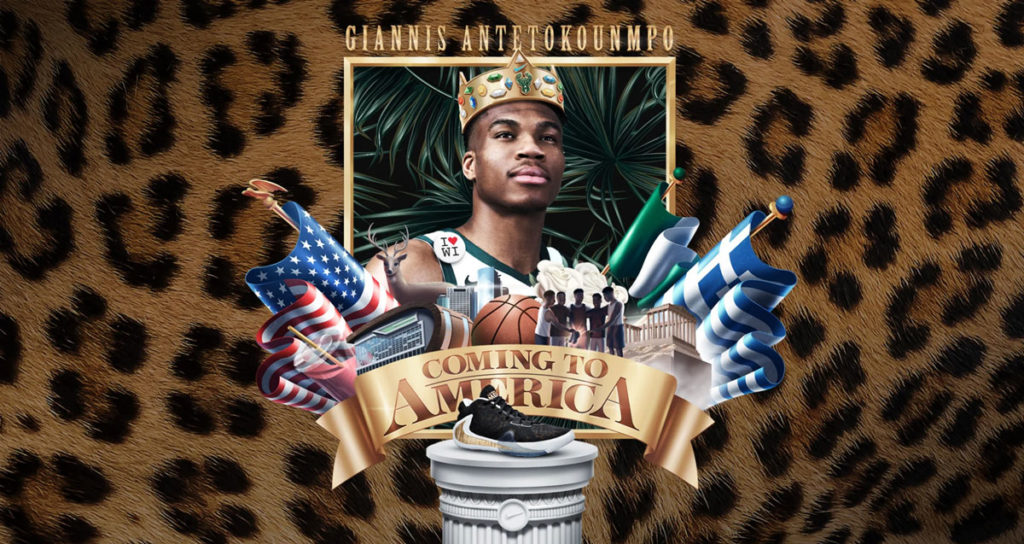 Ever since Milwaukee Bucks position and court redefining Point God, Giannis Antetokounmpo came to America like Eddie Murphy, he truly beyond a cliché changed the game and the watching world. And now with Nike, lacing up some new signatures inspired by the classic 80’s Murphy movie ‘Coming To America’, the Greek Freak is about to change the sneaker one too.

These new most valuable sneakers from this year’s MVP are so clean they’ll have you running up like Samuel L. Jackson in “McDowell’s”.

Time to get the brooms.

It’s about to be a clean sweep Foot Locker.

Antetokounmpo’s first sneaker the Nike Freak 1 is about to take all those LeBron, Kobe’s and Westbrook’s to the shoeboxes with this breath of Air. Fresh out the cardboard these colorful pairs have a reversed swoosh like Travis Scott. Perfect for any shoe dog like Phil Knight. And these ‘Coming’ colorways also feature leopard, black, grey and gold accents to the men who would be King. Prince Akeem’s royal garb and the most inspired international influence this league has seen since the dream shake of Hakeem Olaujawon for a regal fit.

And with the gold ‘Coming To America’ logo on the tongue of these licks you can expect this revolution to be televised. But please bring back our favourite ‘Raw’ and ‘Delirious’ comedian for the commercial Nike.

This perfect pair for the theme of the perfect prototype player of this games future generation drip as hard as ‘ER’ and ‘Logan’ star Eriq La Salle’s jheri curl in this movie. Watch the shoes like Ronald Reagan said to Eazy-E when N.W.A. visited the White House according to The Game! If co-star Arsenio Hall still had a show (bring it on back again) then he’d have them as a guest on his couch. With or without the freak.

Put up a wall against these Trump! We have more shoeboxes to stack.

Wearing clothes are about to be a new experience for you as you unbox these with the rose petals that fall out like Tokyo trees after cherry blossom season instead of tissue paper. There’s also some ‘Coming To America’ inspired Freak 1 Nike apparel to match with some ‘I Love NY’ heart homages to the film about a prince who made his way to the Big Apple like this kid from the Olympic home of athletes in Athens, Greece did on Draft Day.

These really are the Crown Prince of Zamuda.

These Greek sneakers are so freaking good, you’re going to want to renounce your throne.

Come on, come all.