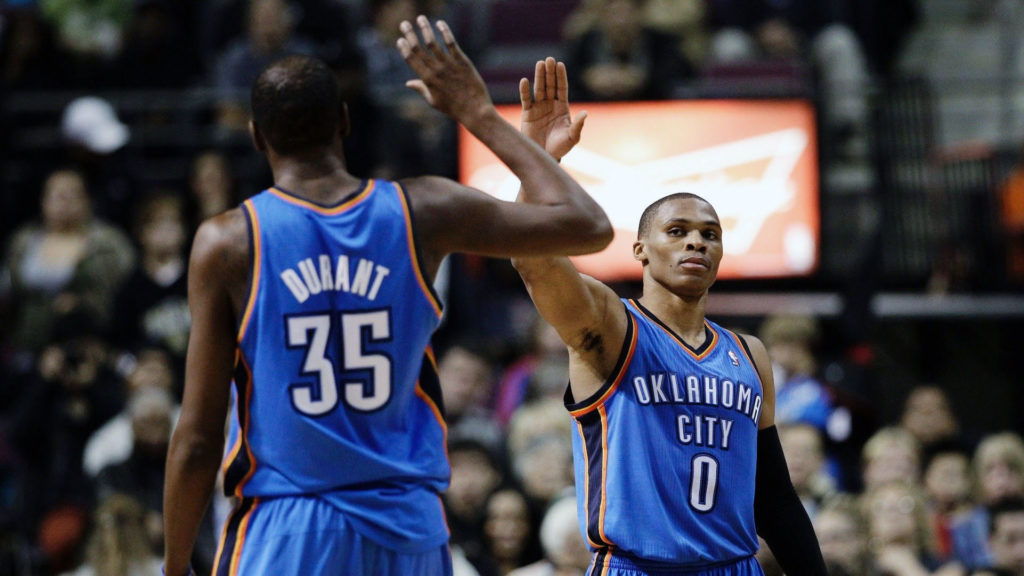 Can Okc Thunder Compete For A Championship

Unless you are living under a rock, you have heard that Kevin Durant jumped ship to tag on the Warriors’ “Golden” squad.

And, thus began the rumbling noise that Golden State was already NBA champions, and we should just skip 2016-17 NBA season altogether. However, in the midst of Durant’s departure, and the preparations for the Summer Olympics in Rio, Russell Westbrook made headlines.

The fiercest competitive force of nature in the NBA was described as “ticked off”, and he’s “eager for the season to start,” says Anthony Slater for The Oklahoman.

So, despite feeling betrayed by his long-time running mate, presumably because of his playing style, Russell Westbrook is ready for blood, figuratively speaking.

“Westbrook has given the Thunder no indication that he currently wants out,” says Slater in his piece for The Oklahoman, which should not surprise fans because that attitude is precisely why so many people love Russ. In a situation, where arguably the best basketball player on the planet leaves your team to join the greatest team of all-time, most players, superstars included, would have left, but not Russ.

So, with Russ in attack mode, Steven Adams, Enes Kanter, a promising young coach in Billy Donovan, great leadership provided by Maurice Cheeks and Monty Williams, and the newly acquired Victor Oladipo, can the Thunder compete out west?

The Thunder as presently constructed is a legitimate playoff calibre team, but can they compete against Golden State, San Antonio, and the Los Angeles Clippers? They can, but they would be the underdog in any of these hypothetical series.

Since Durant’s departure, Oklahoma City has fallen from possibly being the team to beat in the West, to the second-tier teams, but it is not crazy to imagine the Thunder making a deep playoff run.

The 2016-17 Oklahoma City Thunder team can compete against those teams on a nightly basis, and, even, eliminate them in the playoffs.

Kevin Durant leaving the Thunder might have been the best thing that has happened to Russ, because Russ will wreak havoc on the league, and he will show us why he is one of the best players in the game.

For the first time in his career, Russ won’t have to hear about how he needs to understand that it is not his team, or that the offence flows better when someone else runs the show.

Russ will have the greenest light he’s ever had, and the NBA is about to witness his wrath, especially when the Warriors visit Chesapeake Energy Arena.

Russ will be a triple-double machine while shutting down the opposing team’s point guard.

A few days prior to Durant’s decision, Oklahoma City traded Serge Ibaka to Orlando for Victor Oladipo and the newly drafted Domantas Sabonis.

Victor Oladipo will fill a void that has been a problem in Oklahoma City for years, a good two-way shooting guard player. A year ago, Oladipo averaged 16 points, 4.8 rebounds, and 3.9 assists for the Orlando Magic. He brings a key element to the game of basketball that the Thunder have not had since James Harden was in town.

And, in the deal, OKC also received Domantas Sabonis, a 6-foot-11 inches tall power forward from Gonzaga University who averaged 17.6 points, and 11.8 rebounds per game, last year. Sabonis brings size and an inside presence that Ibaka used to bring to the table.

Everyone is jumping off the Thunder’s bandwagon, but this team is good enough to make the playoffs and compete out west, but ultimately they will go as far as Russ can carry them. It’s his team now, something he’s always wanted.

It’s his time to show the world, he can shoulder the load…