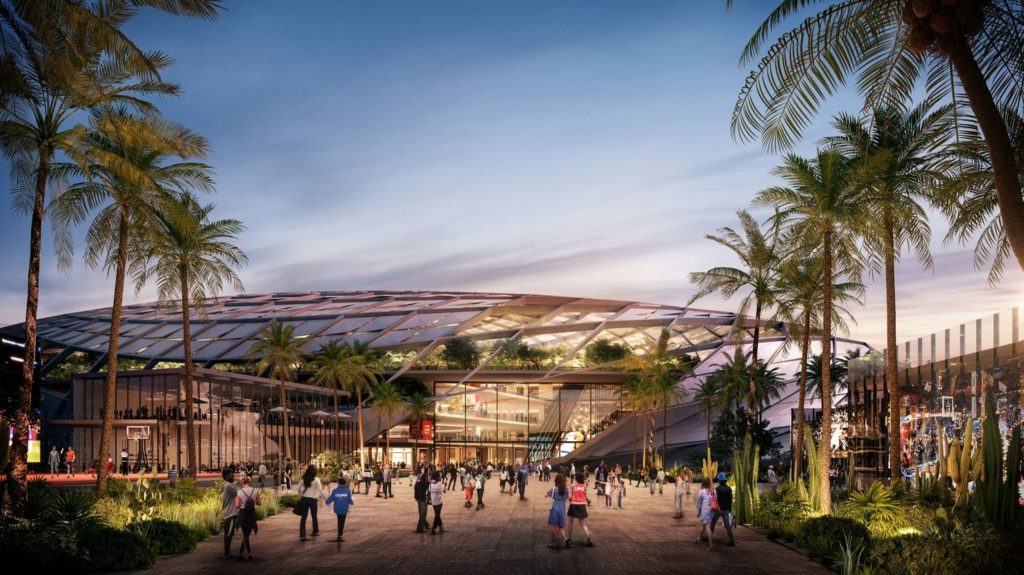 The Los Angeles Clippers used to get trolled for hanging selfies over the Los Angeles Lakers retired jerseys and banners at their STAPLES Center house share like they had none to put up on the fridge themselves. But the Clippers had the last Leonard laugh (aha ha haaaa) over the new LeBron and A.D. Lake Show this Summer when they signed not only Kawhi, but Paul George too. And now in their push to become the new franchise of L.A. like Kevin and Kyrie’s Brooklyn Nets are in N.Y. over the Knicks, they are looking for emancipation in leaving home like they were 18 again.

All for the former Forum Inglewood home…although not actually that court coliseum. No one could ever play in the Great Western Forum again than the Lakers. A M.S.G like Mecca where sophomore star stud Kyle Kuzma wants to play a few games at next year. Just to think if a permanent move happened the Clippers wouldn’t even have to leave STAPLES.

But after years of the Lakers calling it their house the Clippers are on the move like barbershops before five. And new owner of the Spalding team after Sterling’s don’t let the door hit you exit, Steve Ballmer is happy to pick up the cheque like loose hair. The former Buffalo like Braves franchise, who also said “go f### yourself San Diego” (not really that’s just a typo) like Ron Burgundy’s ‘Anchorman’ were considered for Seattle a few seasons back like we only wish the ‘Save Our Sonics’ could still be in a Thunder like Storm. But now even though the L.A. Clippers are leaving STAPLES, they ain’t leaving Los Angeles.

No one’s running them out of town now.

2024 is the date to set. But with no love lost between the Clippers and Lakers it can’t come soon enough.

Must Read:
Julius Randle Is The New King Of New York

And if you thought L.A. Live was the hive of a buzzing hub of electricity and entertainment, then wait until you see this state of the art arena. Even the lovingly rendered concept art as cool as those costumes in Marvel makes for blueprints more beautiful than that classic Jay-Z album. From the birds eye view of this outstanding oval with diamond panels to represent a basketball swish through the net, it looks like a whole new Jurassic World down there Toronto. And with all those palm trees inside the arena as garden party picturesque perfect as Singapore international airport this amazing arena looks set for Hawaii not Inglewood. But expect a forum to follow and punch their tickets on opening night.

Soon downtown Los Angeles may be quiet again like before the new millennium.

Time for the buzzing Clippers to make noise.

The 1 billion, 18,000 seated Inglewood Basketball and Entertainment Center will be constructed on vacant land under the flight path to LAX. So how’s that for a view when coming in, landing in the city and the new team that owns it?

I guess even without Blake Griffin and CP3 Lob City is still flying after all.