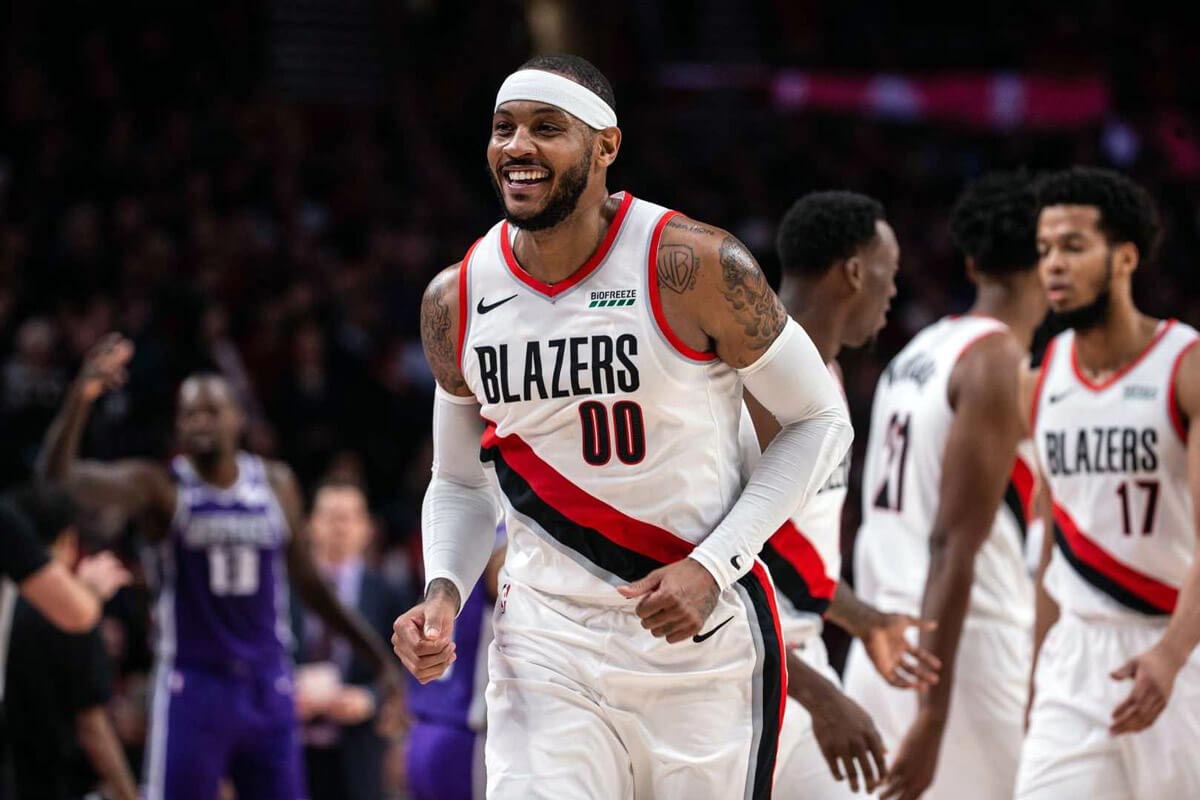 Three fingers like “what’s your poison” and shots to the dome like LL Cool J’s comeback. I’m calling it…

La La said knock you out.

They say there are no guarantees in this life, or league. But now after almost crossing off an entire calender, Carmelo Anthony has one in this league of X and O’s.

You best believe every team that slept on him has woke up now.

And let’s not talk about that ATL jersey Atlanta tried to hawk.

The Nugget type of fellow that Nelly rapped about like ‘Na-Nana-Na’, with the heart of a champion sweat until he was no longer in a suit and part of the Sportscenter theme again. After waiting longer to align with The King in Hollywood for this Game Of Thrones than another Anthony (Davis), Carmelo ended up coming up roses in the RIP City of Portland. And boy has he blazed a trail. Voltron forming arguably a big three with the best backcourt in the league not in this nation’s capital with C.J. McCollum and Dame ‘Time’ Lillard with the look like the OK3 of Russell Westbrook and PG3 and not the Beard and the Brow.

And now he’s exceeded everyone’s greatest expectations. As one of the G.O.A.T.’s has polished his path to the Hall with a comeback even better than the return of Superman Dwight Howard with the Lakers…which could have had a Hollywood sequel with Carmelo’s comeback.

But the Lakers loss is the PDX’s blazing gain.

What more would you expect from a guy who still put up competent averages in the soaring Rockets cosmos, despite being grounded by little court acclaim? The problems in Houston could have actually been attributed to another guy who ended up ousted and in an Oklahoma home too. Despite the trolls who are now trading in hot takes like they never simulated 2K videos of him building a Commodore house with his shot selection. Or the analysts who are changing their discussion like a report rewrite.

Carmelo ain’t calming down. Anthony is taking everyone back to school.

Class has been in session.

And how about the report card? Eight games. 16.9 points and 5.9 rebounds per game. Big shots. Western Conference Player of the Week. All Star legend spot? He belongs like the Carushow in the Slam Dunk Contest. He’s unstoppable like LeBron James’ Eurostep, spin-cycle lay-up that is like a runaway freight…word to Denzel Washington. Or his Kareem sky-hook. Tokyo 2020 Team USA bid for the best in five rings Olympic legend in his golden age? Big shots from the double 0 like seven. From nothing twice?! This is no time to die Mr. Bond.

He’s gone toe-to-shot with the MVP. Showed he was more than a most imported or Sixth Man, but still a star. More than the name, but the actual game. And now he’s guaranteed to be around for a while longer like he never left, but is here to stay. As the Blazers changed the trail on the end of the signature of his contract before the ink even dried for this guy’s with the wet jumper like staying outside in the snow with your ugly NBA sweater this Christmas.

This tax is more than a luxury. It’s about to cap off a classic career with one compelling closing chapter.

Even when he bit career highs at the core of his career in the Big Apple, the ever humble hero Carmelo was a walking and dribbling, “I just take it one game (or day) at a time” postgame soundbite like he has been in his comeback off court to on it. Well now the Blazers can guarantee him 365…or at least 82 or however far he takes them.

From the headband to the hoodie, stay ‘Melo. Anthony is here to stay.