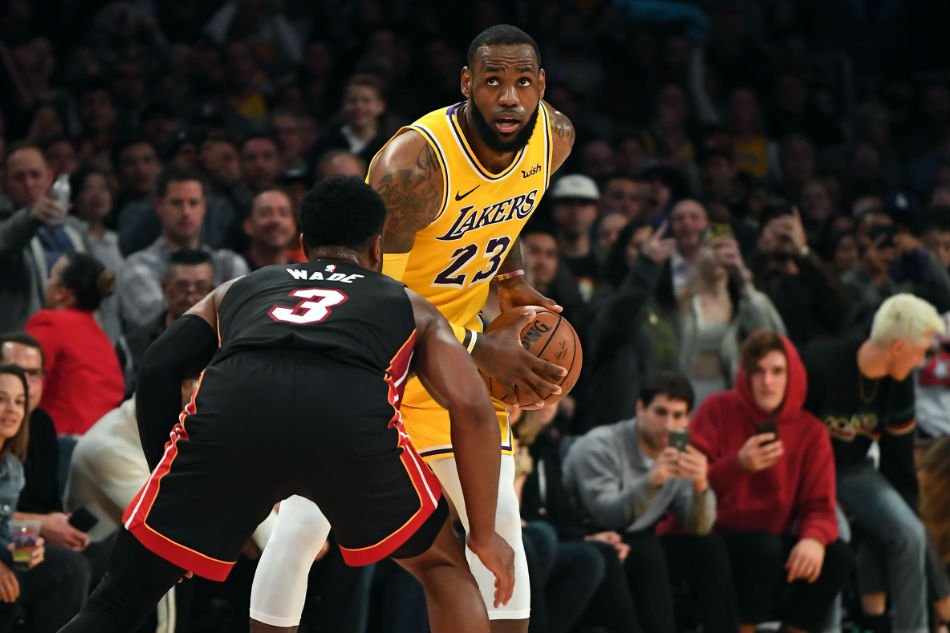 Look up to the hoop heavens and amongst all the Basketball God’s in the clouds you’ll see visions of a young afro donning Kobe cross dribbling and tossing up an alley to the dominant Goliath of Shaquille O’Neal in purple and gold. Dunking it all over Portland like a true Trailblazer and the rest of greater Oregon as a whole with one outreached, falling back hand. Before lifting up both his arms like the Superman he is.

Running back down court like he’s about to take off with a look of excitement on his wide eyes and mouth we’ve never ever even seen look like this from the ‘Most Entertaining Ever’. Something that looks like the wonder of children on Christmas morning for what’s all left under that tree by the big guy who finished off the milk and cookies. Or someone who has seen something take flight that is neither a bird or a plane. And we aren’t talking about no sleigh.

You’ll also see the King reach for the highest throne and bring the whole castle down in a flash. As one of the greatest duos next to the most dynamic ever was the dynamite explosion of Voltron down in the talents of South Beach. One where Miami Heat lifer and the greatest franchise face…sorry we mean Flash of the Florida foundation, Dwyane Wade pitched penny passes to the decision game changer of number 6 LeBron James. Like kids throwing snowballs until the slam spat that started everyone throwing them up like Will Ferrell’s hell of a windmill right arm in ‘Elf’.

That Anchorman was probably in attendance last night amongst the Hollywood elite for the perfect scripted ending to the last dance in La La Land between number 23 and the iconic Heat third of the big-three, D-Wade. For all the jerseys Wade’s world and wardrobe have collected off his competitors so far this season, none had as special meaning as this soccer swap with his former teammate and best friend for life.

As he signed that back of his and traded for a signature Lakers, new era Showtime classic, the photo they posed for was big game James worthy of the same history book frames those game worn jerseys will end up residing in. Like the forever rafters they will one day join. Wade even gave the shoes off his feet to Laker captain Josh Hart. The soaring sophomore who wears number 3 because of Dwyane. Who told Hart in kind that he reminded him of himself and to keep going because he likes what he sees. How’s that for a high-five Josh?

The perfect partnership of James and Wade (along with the big man and big reason they won, Chris Bosh) rung up championships together at Sonic speed like cash registers during the holidays. And they even reunited in Cleveland last year for LeBron’s last run back home after Wade went to his in Chicago.

Just like many thought they would do this season in Hollywood as Dwyane has been linked with the Lakers many times even before the King came to town. But as much as it is a shame for Lake Show fans to never see the Flash in purple and gold (there is always Carmelo Anthony and raising Ariza again). Seeing one last duel between one of the top three Shooting Guards ever and possibly the greatest ballplayer of all-time was more fitting like switching those shirts.

And what a duel it was. After LeBron torched the Miami Vice city for 51 weeks ago last month in his Heat homecoming, Wade’s stepped up show made this final meet one that was so much more Hollywood you couldn’t have blockbuster scripted it better.

Wade had 15 points to hand out with a team high 10 assists. Whereas the King had 28 as the two traded baskets and brotherhood slaps. James again flexing from way downtown he may as well have been Showtime showing off from back in South Beach. But the high-man in the City Of Angels was Kyle Kuzma who wants to be known for more than his offence, but still had an outstanding Kareem (33). But before the buzzer with the game on a 108-105, advantage Lakers line, Wade had a chance to at least take it to overtime and then some with a wild, off-balanced but still somewhat controlled clutch three that rimmed out.

Even this Lakers fan wanted it to go in for the perfect curtain call (kind of), but when the two former teammates ran for the loose ball as the backboard went neon like STAPLES outside and spilled into the crowd hugging and laughing the score in the end didn’t really matter.

What really meant something was the names flipped on the back of the jerseys for a flashbulb moment we will never forget. In the rocking chair tour of the league this was one last dance that didn’t miss a step.