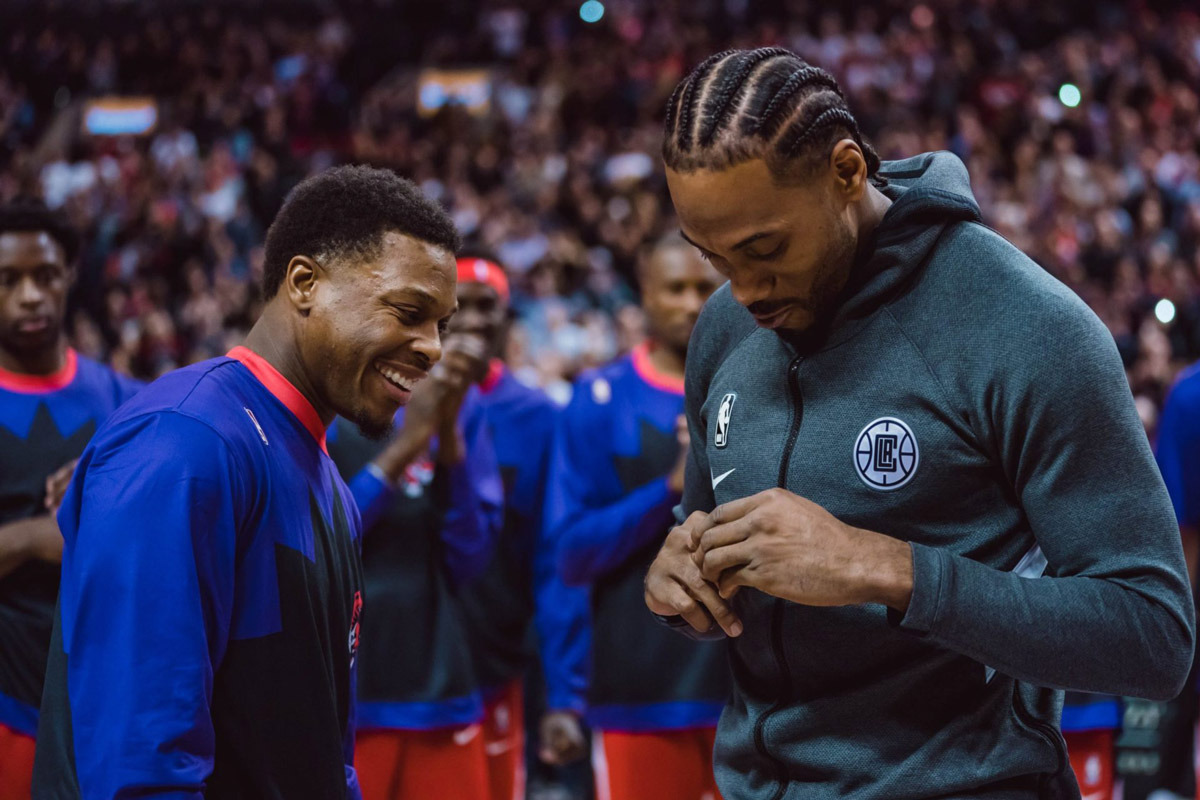 It may have taken longer than his Game 7 buzzer beating, playoff series winning shot against the Sixers, circling around the rim to process. But the board man finally gets his ring. As Kawhi Leonard was welcomed back to his world of the 6’s Jurassic Park for a ring reunion. Returning as a Clipper to his Raptor home in Toronto for more Star clippings.

But in the end against the Canadian champion who are surprisingly still so in contention good without him, it was all L.A. his way.

Kawhi Leonard had 23 points, 6 assists, 5 rebounds, 1 ring and a partridge in a pear tree this Christmas season, as the L.A. Clippers beat the Toronto Raptors (taking it back in uniform and court to their 1995 expansion inception like the dream of cousins Carter and McGrady running a dunk contest night in and night out), 112-92.

And T-Dot just wish they could take it back to last Summer man.

But as Kyle played ring bearer to Kawhi pregame it was this moment of championship matrimony that kept Leonard and Lowry together like these two K.L.’s in initials ’til death do them part.

This brotherhood bond was bigger than it all this night…even basketball. Especially this basketball game. Even if 6 God Lou Will also added 18 and 8 assists against his former Raps club. To go along with Maurice Harkless’ 14, Paul George’s 13, 11 from the Patrick’s of Beverley and Patterson and 10 from Montrezl Harrell for this balanced diet of an attack.

But if your two feet want to talk about balance. T.O is like T.D. too as they know how to eat well with everyone getting their share for their plate at the table this festive season with all the statistical trimmings.

Most Improved to Defensive Player Of The Year’ and team MVP Pascal Siakam had 24 for this 48 minutes worth of shot clocks even though the Clippers lead by as many as this. Whilst equally impressive Norman Powell added 22. OG Anunoby matched P.G. for 13 to go along with Terrence Davis 10. Whereas Spaniard Marc Gasol rounded out the rest of the Raps with 9 points, 11 rebounds and 6 assists.

Must Read:
Westbrook For Wall. Washington's 'House Of Guards' Reshuffles

But with the ovation all standing for a jumbo jumbotron tribute we all know which Raptor this night was for. All to his crowd roaring success as the whole arena sounded like a Tyronasaurus paddock…let alone a Raptor enclosure.

The Klaw was back in the house of claws…if only for a night to rule the earth like when the dinosaurs did.

Welcome back to Jurassic World.