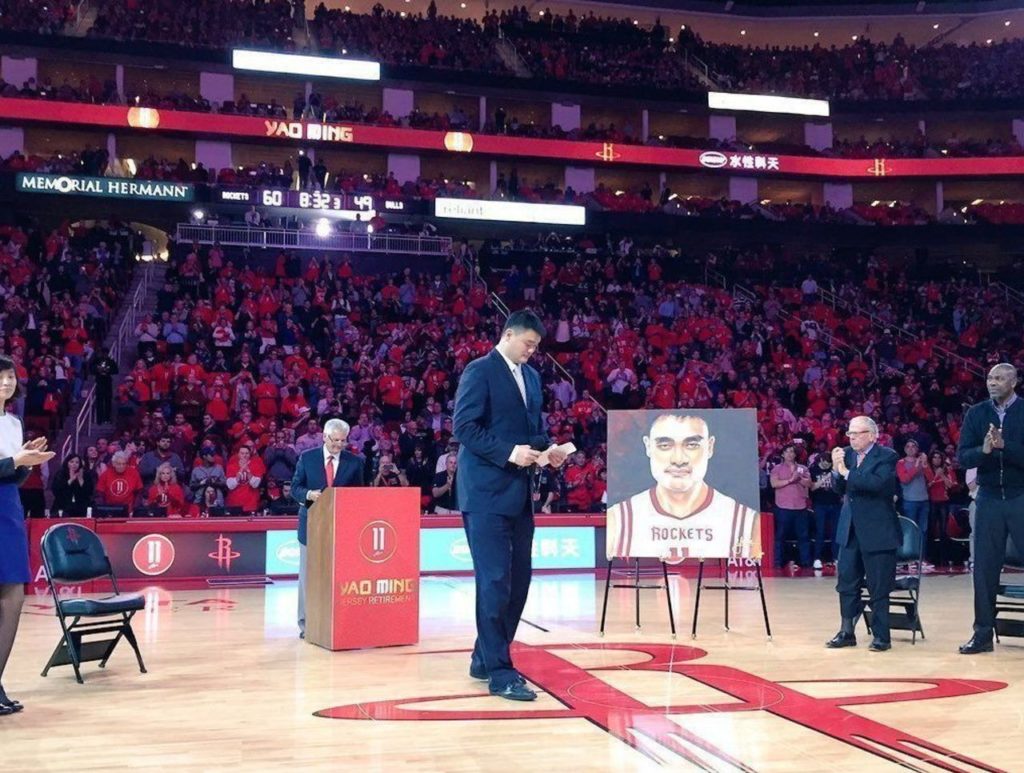 Another big Rocket was propelled to the rafters of the Toyota Center last night as Houston honored Chinese basketball legend Yao Ming.

The Rockets raised his number 11 jersey to the banner area where big names like Ralph Sampson, Hakeem Olajuwon and other names who made their hoop dreams become heavenly true call immortalized home.

And the 7 foot 6 inch, biggest basketball legend to come out of the continent of Asia’s jersey was even larger than life and the rest of the lifers up in the ceiling heights they reached. It looked like it could cover the whole court not just the center where the franchise paid tribute at the half. As Ming stood on the Rockets logo his red and white rebrand helped redesign were he brought the Ming dynasty to one point on the Texas triangle of legendary NBA franchises like the Dallas Mavericks and San Antonio Spurs.

There was even a beautiful painting of a perfect portrait given to the man that changed the face of this game, coming into the the league the same time as legacy generation making names like Carmelo Anthony and the great King LeBron James. A man who like his nations Great Wall created the biggest bridge for this global game that he took even further around the world. Defying the borders of basketball. Something that we can all take great inspiration from right now in this Trump-washed dis-United States that has a lot of once believers in states like this wondering what state this country is now going to be in.

Former teammate and fellow selfless Rockets legend Shane Battier thanked a great man (whose career as not only one of the ship-sized Rockets greatest bigs, but one of the greatest 7 footers in NBA history of a game designed for those who shop at Big and Tall was only derailed by crippling injury) for his “humility”…as real recognized real to those looking familiar. Even current H-town franchise superpower star James Harden leapt into Ming’s arms as he was enshrined in the Houston Rockets Hall of Fame. Then thanking him with 42 points as the Rockets rocked the Chicago Bulls 121-117 after one overtime.

Over time Ming will be remembered as not only one of this franchises best but this leagues too. Regardless of size. And with Houston still celebrating the Lunar New Year with their Chinese themed jerseys the night just fit like Yao’s old number 11. It may be the year of the Rooster but last night it was the moment of Ming.

Must Read:
The NBA Draft Day Journey of Tyler Ennis: Coming of Age