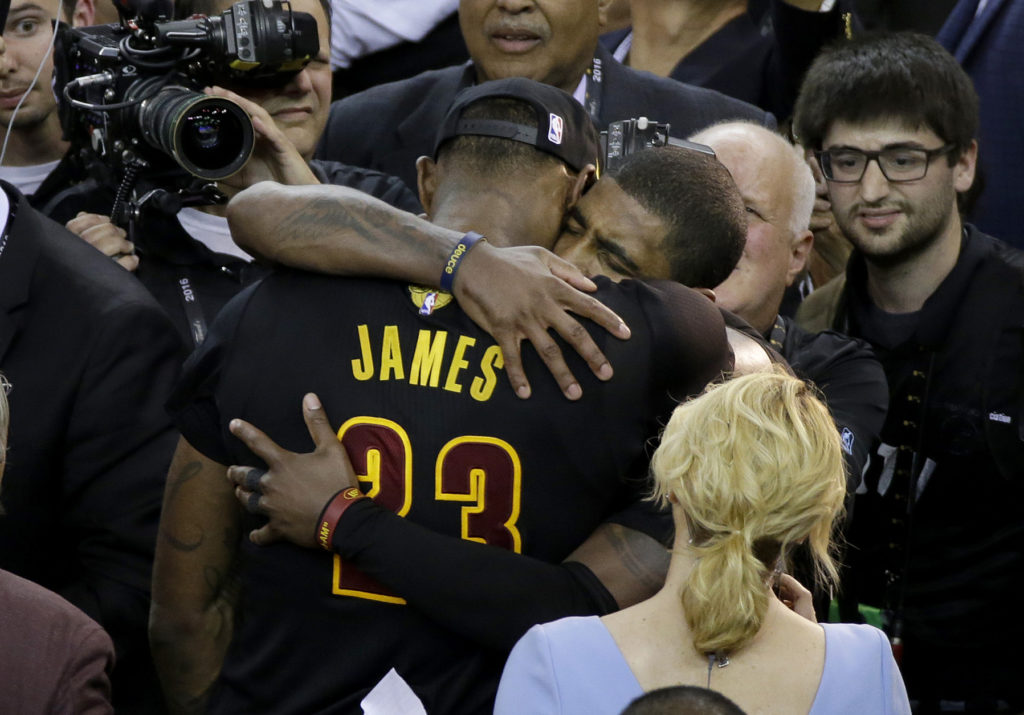 What more can you say?

With his story LeBron James made history. The records speak for themselves. The once and future King…forever.

As LeBron’s name was inscribed as Finals MVP and his Cleveland Cavaliers team was engraved in the Larry O’Brien trophy, James and all the Kings men rewrote the history books for one hell of a record and storybook ending to his storied career chapter.

No franchise in Cleveland from football to hockey in this holy trinity of major sports has won a title in 52 years. These basketball Cavaliers have never ever even won one…

Now the King has delivered on his promise to take the Land to the promised one. After going back on his decision to leave South Beach and those two Heat championships. Taking his talents…and more importantly his heart back to Cleveland, Ohio. And now bringing one home.

Now hows that for a story?

Sure the Golden State Warriors and their unanimous league MVP Steph Curry hold the record for the most wins in the regular season. And that 73 game feat still stands in arguably the former reigning champs best season. But this isn’t even the playoffs. It’s the NBA Finals baby! Game 7. And history!

And there wasn’t much in it. As this game kept your nails bit right down to the cuticle. As both these teams came into this Game 7 equally with 680 total points each for the series and into the final 12 minutes of play with just one point between them in one last quarter.

But going forth in the fourth LeBron just wanted it more. We all knew it. We were just too scared to admit it. Even in our prediction piece. But just look what we wrote on Instagram yesterday before the game…

‘You would think the California in me would be rooting for Golden State tonight but this is a sport about stories and none is better than LeBron James’ homecoming. His Cavaliers could make history tonight and become the first team to win the NBA Finals after a 3-1 deficit and that really is too good to resist. The Warriors already have the 73 game record for the regular season and they won it last year. In this years rematch the King is actually the underdog. And imagine if he almost single-handily beat some real Warriors? He won in Miami now he looks to bring one home and take his Cleveland to the promised land. Still by the by we’ve already got what we want already…an incredible Finals.’

Must Read:
Spalding's '125 Hoop Years' Ball Is The Perfect Gift This December 25th

You couldn’t script it better…but you best believe this was no fix!

This is what this British Basketball fan on the wrong side of the ocean stays up until four in the morning for. Until the birds start singing. Watching his first live, full game-apart from going all the way to the States just to watch one-in years. I love this game! It’s worth all the crows.

It’s worth it all. All the doubt. All the blowouts. All the hate. All the staring down the barrel. These Warriors came for the crown. A three money Draymond Green almost took the Cavaliers head off with 32 points and 15 rebounds. Whilst a late, deep Curry three looked not like a dagger…but a sword. But still cutting through the rest of the Chefs recipe one thing is clear. When you come at the King you best not miss. Especially when a young Prince storms your castle too. And it was Kyrie Irving’s 26 points (who throughout this series and game showed he now belongs in the NBA’s elite before he even became a champion) that really won this from downtown as he put the big, game defining shot through the hole and in the face of Steph showing him how on this night its really done.

But between all the heart that Love showed and all the dirty work that Canadian Tristan Thompson made proud. Not to mention R.J., Richard Jefferson’s experience (Happy Retirement legend…I can’t believe it’s your time. You still seem so young. Your time in New Jersey so last week), or J.R.’s big shots, these all in Cavs showed real strength in numbers in the ranks of all the Dubs big-threes.

Coach Lue finally stepped back over everybody with an even bigger shot! And with all this reign in this game it was the King who finally re-took his throne again. But in a way it felt like the first time. His 27 points, 11 rebounds and assists (recording records again following Laker legends Jerry West and James Worthy as only the third player in NBA Finals history to have a triple-double in Game 7) and three of the biggest blocks you’ll ever see in basketball (including one revenge one on last years Finals MVP and his former stopper Andre Iguodala) brought the Warriors walls down 93-89. ‘Bron had been watching ‘The Godfather’ continually throughout these playoffs but on this Finals finale he went full Corleone. BANG! Jab stepping like Muhammed Ali.

Playing rope a dope with Draymond Green like the champ. Rumble young man rumble! The soul of a butterfly…the Gods let it be. And as LeBron finally fell to the floor of centre court and into the arms of his band of brothers in tears like an exhausted Jordan, the King won and made history in more than one way. And he did it on someone else’s floor.

I bet you didn’t think you’d see that when you looked in the Oracle years ago. Once Cleveland soaked LeBron James’ number 23, Cavalier jersey in gasoline. But now it’s drenched in champagne.

When LeBron left home haters threw rocks at his throne and his arms out, chalk tossed banner that reached out over the city. Now the one you witness raised up last night like their first banner to the rafters says just one thing…