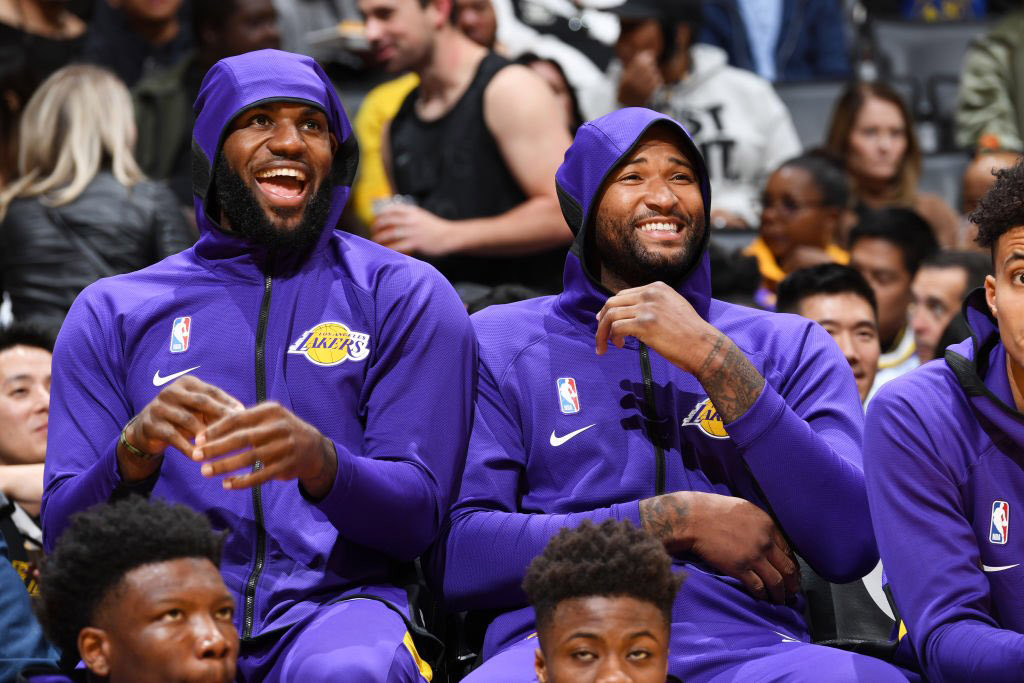 Pelican and Wildcat pack connected with Laker superstar Anthony Davis and veteran legend point Rajon Rondo, when the Lakers copped Sacramento Kings great DeMarcus Cousins this off-season it was meant to be their strongest Summer signing. Reuniting D.C. with A.D. after their N.O. year this was just a campaign after Cousins related to a Durant, Steph Curry, Klay Thompson and Draymond Green, Golden State Warriors superteam that only last season, after the arrival of the big-man — fans around the league were calling not playing fair.

Because Boogie down low was the best center in the league, reminded us of an explosive TNT hybrid of Shaq and Chuck. But his post power productions have been crippled by injury even if he ill-advised but all heart tried to redemption return for his former Warriors’ team in the losing finals against the Raptors.

Now out of California again, even though he is no longer a Warrior, like K.D. you can always dub DeMarcus as one.

Meanwhile, whilst Lakers fans were celebrating Cousins arrival with caution once they knew he still needed time to recover, the Lakers brought back to bewilderment the infamous name of Dwight Howard. It looked laughable and ludicrous to bring back the former Mickey Mouse superstar even on a non-guaranteed contract. Especially when there were other former All Stars and future Hall of Famers on the market (Carmelo Cough Anthony).

It looked like chemistry cancer. But it was as natural as biology. And then so many rebounds, blocks, dunks, one contest and guaranteed contract later and the redemption reunion was set for a season that took everyone by surprise. The epic, emphatic energy Hollywood needed way back when flipped the script, as changing his legacy number 39 dunked all over the legend of 12 with his signature smile.

Just when the Lakers thought their dynamic Wilt and West, Magic and Kareem, Shaq and Kobe following dynamic duo of the beard and the brow of LeBron James and Anthony Davis had a big-three like Miami in DeMarcus Cousins, it actually turned out that the Lakers had a big-three Ghidora like post blocking and dunking monster of Davis, Dwight and of course all-time fan favourite, JaVale McGee. But still fans thought that once D.C. came back to Cali’s capital, another head would grow. But now the Lakers have cut it off like a broken leg in the Wild West wilderness this Winter.

Must Read:
Avery Bradley Is The Lakers X-Factor Of The Year

The Lakers have waived DeMarcus Cousins before he ever played a single game or before he got the chance to show that he’s still got it like that. But trust he still will as another team will pick him up (if only it was the Lakers next season as DeMarcus talked about how much he liked this brotherhood 1 through 15 before sharing on Instagram his “tough times don’t last. Tough people do” tattoo following the cut). Forget a Howard’s end in redemption, there’s about to be a revenge reunion. Especially if a rival picks him up in these mind games.

Because the Lakers have just played one whilst hopefully not playing themselves. Cousins could have been that Rasheed Wallace like Pistons’ signing after the trade deadline that could have guaranteed them a chip (and do we remember who that Detroit Bad Boys reboot team beat in the finals that season? I will give you a clue. Even adding the Mailman and Glove of Karl Malone and Gary Payton wasn’t enough). Although rumour has it with him rehabbing at the Lakers facility for the rest of the year (this isn’t the first time the Lakes have made a classy move like this. See, Xavier Henry), after this sacrifice he may re-sign with the Lakers this Summer anyway. But now however the Lakers’ have brought in another former Piston to hopefully fuel their assembly line.

After missing out on ‘Melo and Andre Iguodala the Lakers didn’t want to make the same mistake for one of the best on the buyout, even if they have just added the realest to the free agent pool to get him. The hustle and heart of Markieff Morris is exactly the true grit this Hollywood team needs for the playoffs that they have been missing since they didn’t re-up Tyson Chandler.

Bolstering the Caruso and cook-ed up bench and backing-up and giving more three space for Kyle Kuzma. But what’s more like the dreads and headband, Spider-Man pointing match-up of Harkless and Jae Crowder, the Lakers now have a Morris vs Morris brother Hollywood story perfect for their script ending that should see the Battle for Los Angeles Western Conference Finals closing chapter with the Clippers that much more compelling.

Now the L.A. King one-two punches of James and Davis versus Kawhi Leonard and Paul George have more in reserve for Markieff and Marcus matching-up with twin ambition. And it’s going to make for some epic entertainment come playoff time that we can preview at the start of April for the California clash rescheduled after the tragic death of Kobe and GiGi Bryant. And what’s more Marcus says the brothers after playing together for years are going to live in the same house in Los Angeles. That should make for some awkward dinners after we see who is eating come June.

The Lakers have just gained another brother. But in this Fast and Furious league when it’s all about family, don’t forget about your cousins.