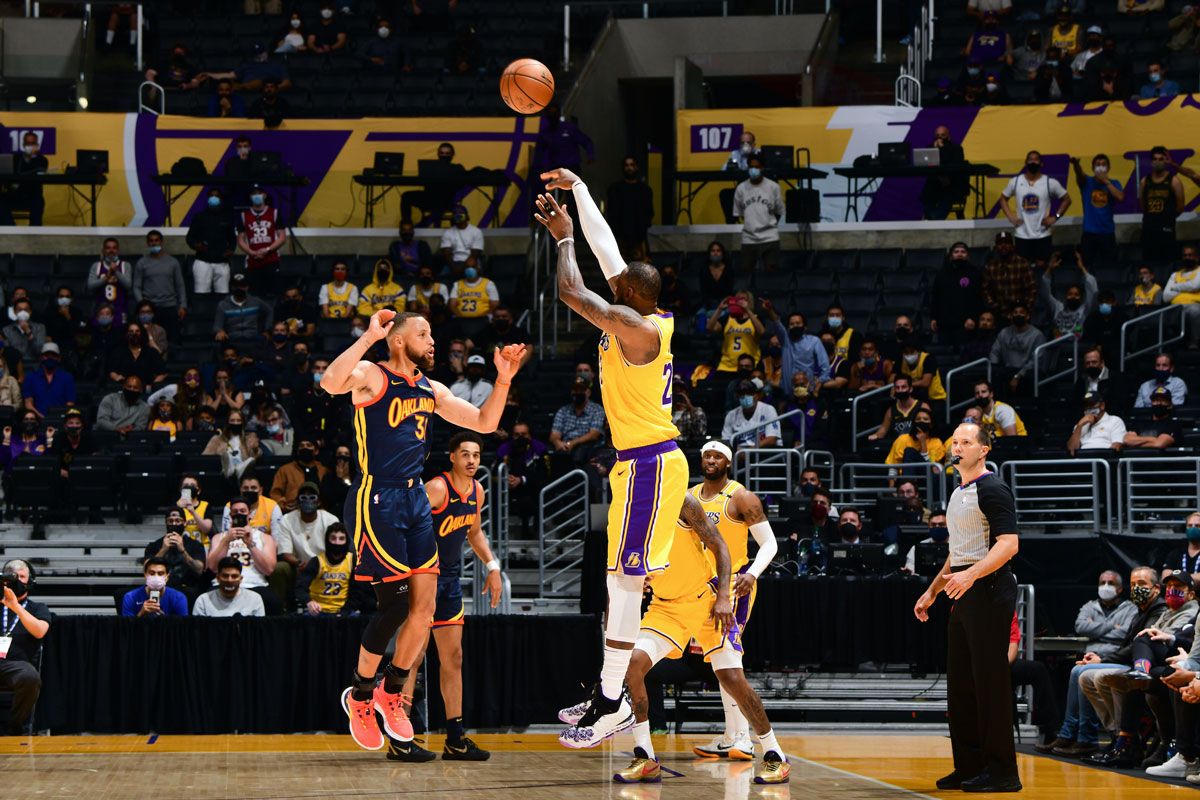 His left eye swollen, his body drenched in sweat, LeBron James subtly chided Draymond Green for the shot to the face he took late in the fourth quarter of their NBA play-in prizefight.

“After Draymond’s finger to the eye, I was literally seeing three rims out there,” James told ESPN’s Rachel Nichols in a post-game interview.

“I just aimed for the middle one.”

There was nothing subtle about James’ masterful second-half performance in a 103-100 Lakers victory over Stephen Curry and the Golden State Warriors.

Hobbled with an ankle injury, James was largely ineffective in a first-half the Warriors dominated.

But in the second-half James found a second gear and hit a devastating game-winning three-pointer with 58 seconds left in regulation, just as the shot clock expired.

He finished with a triple-double — 22 points, 11 rebounds and 10 assists — and orchestrated the Lakers offence with brilliant playmaking down the stretch.

Curry had 37 points and seven rebounds but couldn’t break free for a final shot attempt with two seconds left that could have forced overtime.

Warriors forward Andrew Wiggins (Vaughan, Ont.) had an efficient 21 points on 10-18 shooting and kept James in check for much of the game with lockdown defence.

Green was a gadfly to Lakers forward Anthony Davis, agitating and suppressing him until late in the game, when Davis rolled to the basket more frequently for easy dunks.

Davis finished with a deceptively quiet 25 points and 12 rebounds on 41.7 per cent from the field.

As the victor, Los Angeles takes the seventh playoff seed in the Western Conference and will face the second-seeded Phoenix Suns in the first round of the NBA Playoffs.

Must Read:
Will The Bucks Buy A K-Mart Bargain?

The Warriors will battle for the eighth seed with another play-in-game Friday against the Memphis Grizzlies.

“That was a tough one,” said Curry. “All-time great players make great shots. That’s what happens.”

Brooks had 24 points, 7 rebounds and three assists and played smothering defence to lead the Grizzlies over a struggling Spurs team hampered by a sub-par performance from all-star wing DeMar DeRozan.

The former Raptors standout had 20 points on just 5-21 shooting in the loss.

Grizzlies centre Jonas Valanciunas, also a former Raptor, had an absurd 23 rebounds to match with 23 points and three blocked shots in the victory.

“That’s the number one thing we talk about. Resiliency comes from that if you start from that mentality.”

The winner of Friday’s Grizzlies-Warriors game will face the No. 1-seeded Utah Jazz in  the first round of the Playoffs.