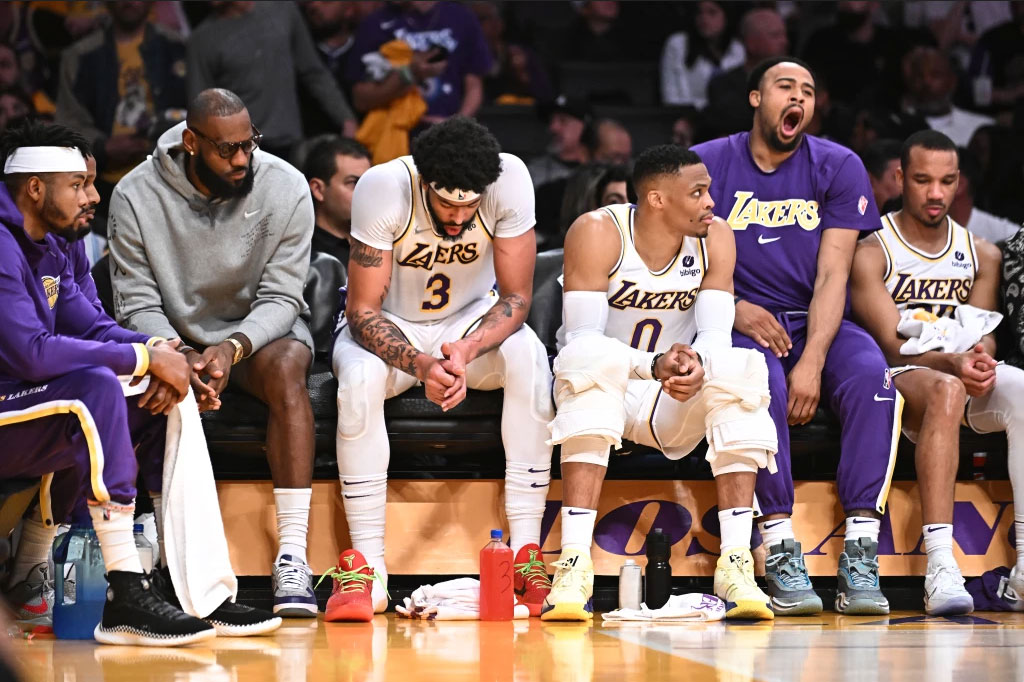 Losing time the fall of the lost angeles lakers

Well. There you have it.

The Lakers 2021-2022 season may not be “officially” over, but their postseason one sure is.

Earlier this year, LeBron James said whoever came up with the NBA’s new play-in format “should be fired”.

As of today though, he won’t even have to worry about playing in that.

He doesn’t have a shot.

Because the Lakers have been eliminated from playoff contention. By the same team that ended the King’s reign last year. Sending him salsa dancing.

That team being of course the 63 win Suns who are my pick for NBA champs this year. They have been ever since Devin Booker was seen saying “damn”, watching Milwaukee walk away with the trophy.

People say it’s never been the same since Andre Drummond did an impression of LBJ backing down Jae Crowder. We think it’s just been different after Anthony Davis and Dwight Howard got into it on the bench. Before all that Hollywood drama, the Lakers had too much hubris and fun off of one win against Phoenix, like Magic to Kareem in his Showtime debut.

Pride comes before a fall.

Now, the only winning time you’ll see from the purple and gold is on the new HBO show.

Worst season in history, with all that fame for the hall? One so bad you almost longed for Smush Parker and Kwame Brown back.

The only solace those who bleed purple and gold have is something new for their Bumble bios. “You want to know how loyal I am? I’m a Lakers fan!”

So, is it down with the King now it’s the fall of the Los Angeles Lakers?

Next season, the 37-year-old will keep that same energy after year 75 may as well have been ‘Bron’s career one as well as the NBA’s anniversary. He’s been in the L so long, he may catch a game or two with his son Bronny. Chasing down father time and Kareem’s all-time scoring record like he did this season, when it came to total points with playoffs combined into consideration. Never stat padding for a second.

Yet the Lakers need retooling like the time Jerry Buss promised he’d take a wrecking ball to a Kobe team after a poor playoffs performance.

Otherwise next year they won’t even make it this far. No matter how high they draft now they’re in the lottery.

Heading into free agency the only untouchables are LBJ, AD and the magnificent Malik Monk.

Also, let’s not forget Stanley Johnson, Wenyen Gabriel and D.J. Augustin who came in throughout the season and tried to right the ship as well as they could following LAL jettisoning DeAndre Jordan.

That’s not their D.J. anymore.

Now it has also been announced that the team will waive Trevor Ariza, let’s not make starting to clean house at the retirement home jokes. Ariza is a Lakers legend for life…and a champion too. Let’s give thanks, Lakers.

At least the show gets Kendrick Nunn back next campaign. He’ll feel like a new player.

Returning from injury for the last few games with a killer ‘fro. Anthony Davis showed a lot of heart as he tried his hardest to hustle this Hollywood team back to a better ending. All in, when he could have just shut it down.

Would you have blamed him?

He’s right though. The Lakers had more line-ups than wins this 82.

Russell Westbrook played through all the hate he’s been receiving on social media lately to finish strong in the final frame of the Lakers campaign too. Sadly in the end, it just wasn’t enough.

I’d give him another shot. Why? You know why! Russ has said he’ll run it back, but a lot of fans are giving him the, “you’ll never work again in this town” vibes. I thought this city of angels loved a movie making redemption story in Hollywood?

Disappearing after bringing in the King. Before the Lakers won in the Bubble and then everything burst. Magic had an interesting take on ESPN the other day. The best closer in the game right now DeMar DeRozan was interested in a California homecoming before he headed for Chicago with the wind.

With that move, the Lake Show could have used the money they would have saved on the alpha Westbrook by keeping Alex Caruso and KCP. Losing both of them decimated their defences. This would have also made the Lakers able to trade Kyle Kuzma for Buddy Hield. Or even keep Kuz after the season he’s had in DC.

Must Read:
Mount Mutombo Climbs To The Mile-High Rafters

DeMar could have also had a Raptor reunion with Kyle Lowry, but the Lakers were unwilling to unload THT. Talen Horton-Tucker’s face on this pieces picture above saying it all this season. We get that though.

For all the flack they’ve received for dispensing with their young core before it’s time. Which is coincidentally all coming to fruition right now. Getting rid of another young stud for an expiring contract would have come back to haunt the Lakers like that Luol Deng deal…which never seemed to expire.

After the early curtain, we’re just calling all this excuses like the injury and protocol ones. Besides, every team has been plagued since the pandemic.

Los Angeles still have assets. They’d be wise to hold on to the Hall of Fame midrange magic of ‘Melo, as Anthony is still worthy of a celebration downtown. The Duke, Wayne Ellington is also know to quick draw with the best of them in the Wild West.

Love also needs to be shown for Kent Bazemore. The Quinn Cook of this season, who also deserves his shot back in the NBA. Bazemore would get more significant burn elsewhere, but he has stayed the course and positive to boot. No matter the minutes made. Tweeting after every game about chopping wood and carrying water like a Phil Jackson mantra.

Reunions with Avery Bradley especially, Dwight Howard and Rajon Rondo worked too. Although Rondo is now gone and Howard has sometimes been buried at the end of the coach’s bench, despite big performances and plays.

Which brings us to our final point. To be Frank. Vogel is probably done now. He’s a champion coach and a great one at that, but sometimes it’s our time. And his may have come.

You can still give him his damn respect, mind you. Like the ring he wears.

We don’t know what this scorching summer will hold when the heat is on like when LeBron made decisions based on his talents. Let’s not also play free agency fantasy basketball when LA at this present time looks about an attractive a destination as it does during a gridlocked Grammy or Oscar weekend. Whatever California chooses by that time is for then.

The talk of the town is no longer them. For now the shows over. And it goes on like the beat for the rest of the NBA.