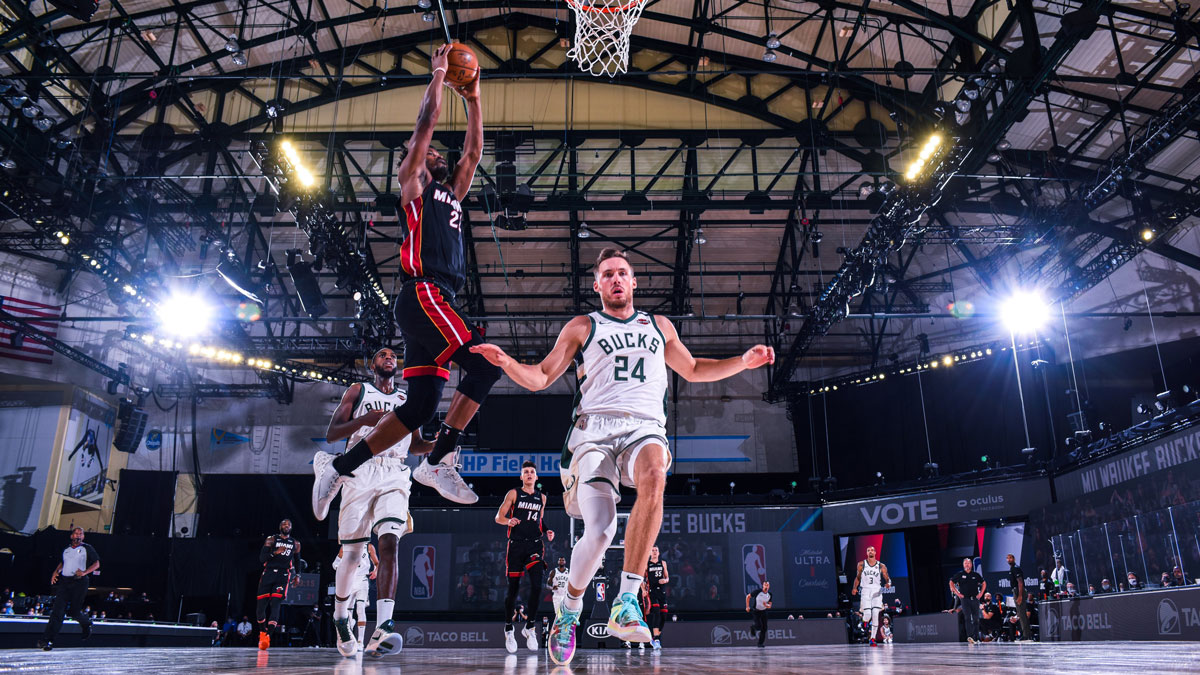 Fear the deer, but one thing is clear.

To think we thought it was the Magic’s Kingdom.

The Miami Heat freaked the Milwaukee Bucks without Giannis Antetokounmpo, 103-94 in Game 5 of the Eastern Conference semis. Bursting the top seeds bubble and sending the East beasts packing.

At least they can go fishing ’round here.

Only in Disney World.

Miami, though. They aren’t going anywhere in their home state.

After a scorching season in the park, the only thing hotter than those almost unbeatable, scoring Suns are the 8-1 Miami Heat here in Florida. Now the only thing more white hot than them is mercury like a GOAT Taurasi.

Just to think, a year ago Miami like Alonzo was mourning the ‘One Last Dance’ retirement of Dwyane Wade’s world. One that changed the game down low with Shaq and in the big-three era of fellow Heatles, LeBron James and Chris Bosh as their Flash superhero ate chips the same as nachos with extra dip.

Now this team is dripping more than the players entrance fashion runway … and these league leaders fit.

Just to think, Jimmy Butler was fatherless, homeless. Kicked out by his mother because she didn’t like the way he looked. Just like many NBA teams as he was drafted lower than chubby kids getting chosen last in a pick up. Game knows game, however, and after bouncing around teams from the Bulls to the Wolves to the Sixers. Jimmy has finally found his thing in South Beach and a home for his talents.

The Butler has been doing it, too. Doing it well like LL. Giving other teams the L like elevated trains in his old Chicago Town.

Must Read:
The Rockets Are Far From Washed

Giannis could only watch his team being Mortal Kombat, “FINISH HIM,” eliminated by Jimmy and his Heat. Butler along with great guard Goran Dragic had 17, shooting the Bucks down.

Jae Crowder notched 16. Tyler Herro added 14. Bam Adebayo 13 and Kelly Olynyk 12 to keep this end-game, elimination contest perfectly balanced as everything should be.

Whilst all MVP Antetokounmpo sadly had in this contest was an ankle sprain.

He wanted to play, but the Bucks didn’t want to jeopardize his health.

Still, if that doesn’t tell you his value, I don’t know what will. Even after the Heat’s clean sweep of the Bucks was avoided last game as former Most Improved Player of the Year, All-Star Khris Middleton (23 in this one) took the team’s antlers in the Greek Freak’s absence.

The heart will grow fonder for a storied Milwaukee. Who had the biggest season and post one, leading the brave, bold and beautiful NBA boycott of games for the Black Lives Matter movement. This is a franchise that had both Kareem Abdul-Jabbar (then Lew Alcindor) and Oscar Robertson on the floor at the same time. Or the Big Dog, big-three of Glenn Robinson, Ray Allen and Sam Cassell.

They will be back, even if people are already mocking up Giannis in other jerseys like he’s already N-Sync gone.

Right now, though, it’s all about Florida like this actual tournament … and look who’s owning it.

Now the Heat is really on.

“We want people to count us out,” Butler said post-game.

Trust Jimmy to have the last word … and then silence it.