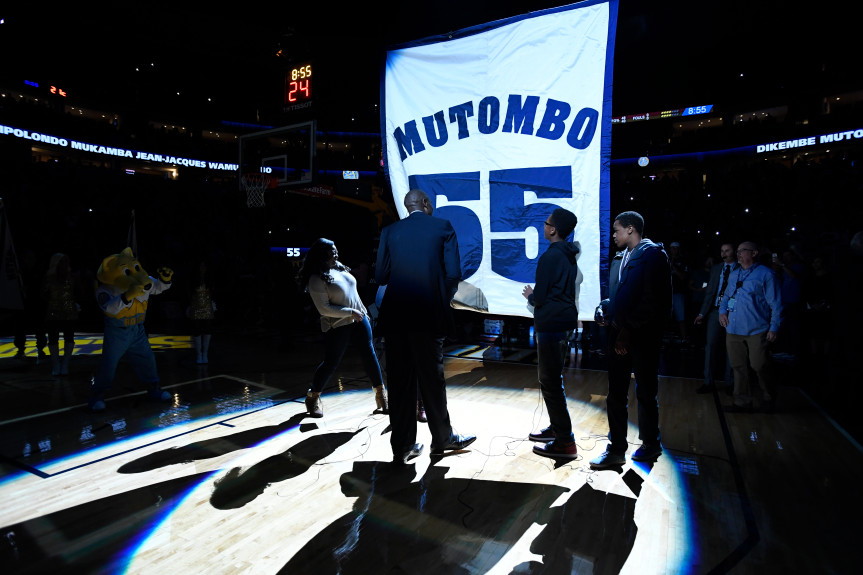 Orange eclipsed the sun as Dikembe Mutombo fell to the floor with his eyes to the sky and raised the Spalding into the Game 7 air above his head like Simba in the Lion King. Arms fully extended with the only thing shining brighter being his beaming 100-watt smile.

It’s perhaps the most enduring image in Rocky Mountain, Denver Nuggets history and the NBA’s hallowed video-tape reel for a team who from Alex English to Carmelo Anthony have had plenty in the air up there. As in 1994 Mutombo helped his eighth seeded Nuggets climb the mountain top of upset, knocking out Shawn Kemp and Gary Payton’s top ranking Seattle Supersonics in an epic playoff series of hardwood classic NBA history.

But last night the Nuggets took it even higher than that, or even that iconic game ball as they raised Dikembe’s number 55 jersey to the clouds of the Pepsi Centre to forever coronate the legendary centres place in Denver Nuggets lore.

Mount Mutombo’s iconic 55 has already took flight to the top of the Hawks rafters in Atlanta thanks to a Phillips Arena ceremony last year, but now the great who also had a rejuvanated ‘what’s his age again’ surging streak for the Rockets in Houston, backing up and mentoring the injury wall hitting Yao Ming has a twofer honour. And you best believe his jersey will wave proudly like a flag even in that thin Colorado air.

And the Georgetown great carries this like the ambassador of this global game did with his soulful representation of his native Congo in the borderless basketball league of the NBA. Walking tall with heart like he did next to fellow golden era 90’s, college court contemporaries Alonzo Mourning and Patrick Ewing.

But nothing stood as tall as his moment last night.

The mammoth man who aswell as tenures in New York and Jersey also partnered with Allen Iverson in their Everest like challenge to get over the Goliath Shaq and Kobe, Hollywood Hill Lakers heart belongs here in Denver. The team A.I. left Philly for. The Emmanuel Mudiay, Kenneth Faried team of the future that paid tribute to Deke by rocking the ‘Rainbow Skyline’, Atari 80’s Tron looking, Mitchell and Ness throwback. One that Deke last brought out for NBA Africa as he and fellow big-man great Hakeem Olaujawon took to the court in a halftime surprise for the exhibition game. Arguably one of the most cult classic popular and iconic old-school jerseys in NBA apparel closet history.

Sure in-game the Nuggets may have lost 115-113 to Damian Lillard’s Portland Trail Blazers as number zero wrapped it all up with an incredible line of 37 points, 5 rebounds and 7 assists that was all she wrote. But last night was about the Hall of Famer Denver drafted with the 4th pick in the ’91 draft. A true golden Nugget mined and found that went on to finger-wag his way to 3,289 blocks in his career as one of the greatest defensive players of all-time.

“I want to thank the fans of Denver for making me feel so welcome” the man himself said as everyone in attendance was upstanding for his ovation.

And this time as number 55’s finger pointed to his banner moment as his jersey took its rooftop home, for once it wasn’t wagging.

Only in this house.