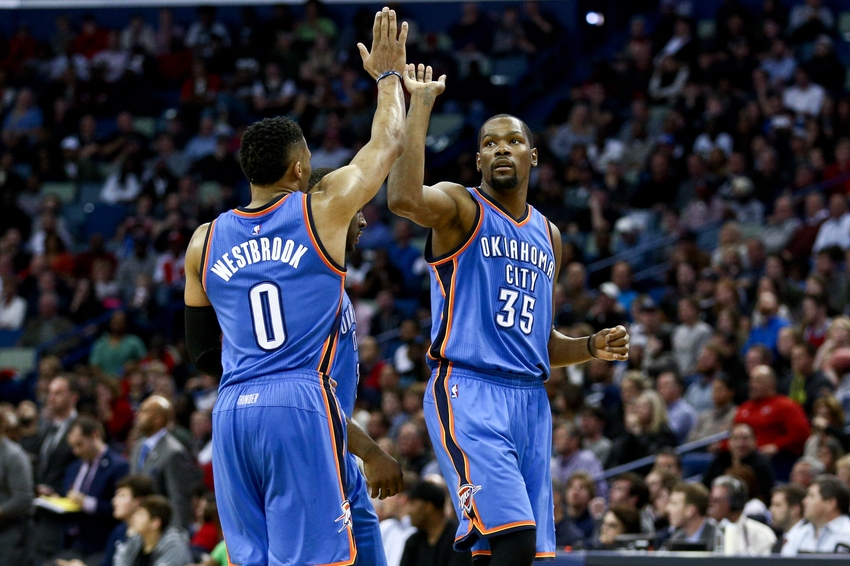 Running the fast break like a gazelle, Kevin Durant hammers home the dunk like a bolt of Thor lighting. A Thunder strike straight from the heart of his Oklahoma City home.

That’s K.D’s signature set move in this Jerry West logo league, but its his next maneuver that will have Shakur eyes all over it. Do you know what he will do this Summer?

Decisions, decisions will give Kevin Durant the opportunity to be the biggest free agent the NBA’S Summer signing league has seen since King James looked for a new castle. But which team has a thrones chance in this game and who will be left watching from beyond the moat?

Rumor has it that number 35 may say hello and roll with the deep Golden State Warriors next season. Joining Steph Curry’s big-threes and downtown Oak-town grande trois of the MVP, his Splash Brother Klay Thompson and new NBA Store employee Draymond Green. Which would just make the unstoppable Dubs even more runaway carriage so. Sealing their big market San Fransisco move with the man that took the Seattle franchise to OKC at Supersonic speed. Making this all look like the video game Steph covers with the sliders set to ‘Too Easy’. Rack ’em up!

Hometown may be where the heart is however, as from road game banners to Instagram accounts every Wizard and D.C. native has been trying to recruit Kevin back home to be a Washington star like Denzel or fast break panther John Wall. Also the Houston Rockets want to reunite Durant with James Harden like it was no problem. While the Miami Heat want to reverse theirs and let basketball God karma redeem itself with some new big free agent talents taking South Beach’s interests. But lets face it which team in the National Basketball Association doesn’t want this guy? Even the WNBA wishes the could change the rules and game and get him like his perfect date.

Lob City are at least pitching something the Thunder’s way, learning from the DeAndre debacle and praying for rain in Southern California. Offering up their ‘other’ devastating dunking b.i.g. Blake Griffin as a sign and trade for OKC. The kicker, this Showtime showstopper is from Oklahoma. Speaking of which even Stephen A. Smith thinks the Lakers have the chance to give the post-Kobe purple and gold keys to a new franchise star…with an even better chance of adding UCLA alum and teammate Russell Westbrook a free agent year later. But then again this is Stephen A. Smith who is talking here.

No matter how movie making this sounds we think the most dynamic duo since Shaq and Kobe is staying put. No Hollywood divorce. No death of a dynasty. They haven’t even built one yet…but they are about to. It’s not just all about the Bay Area out West. Watch this space…