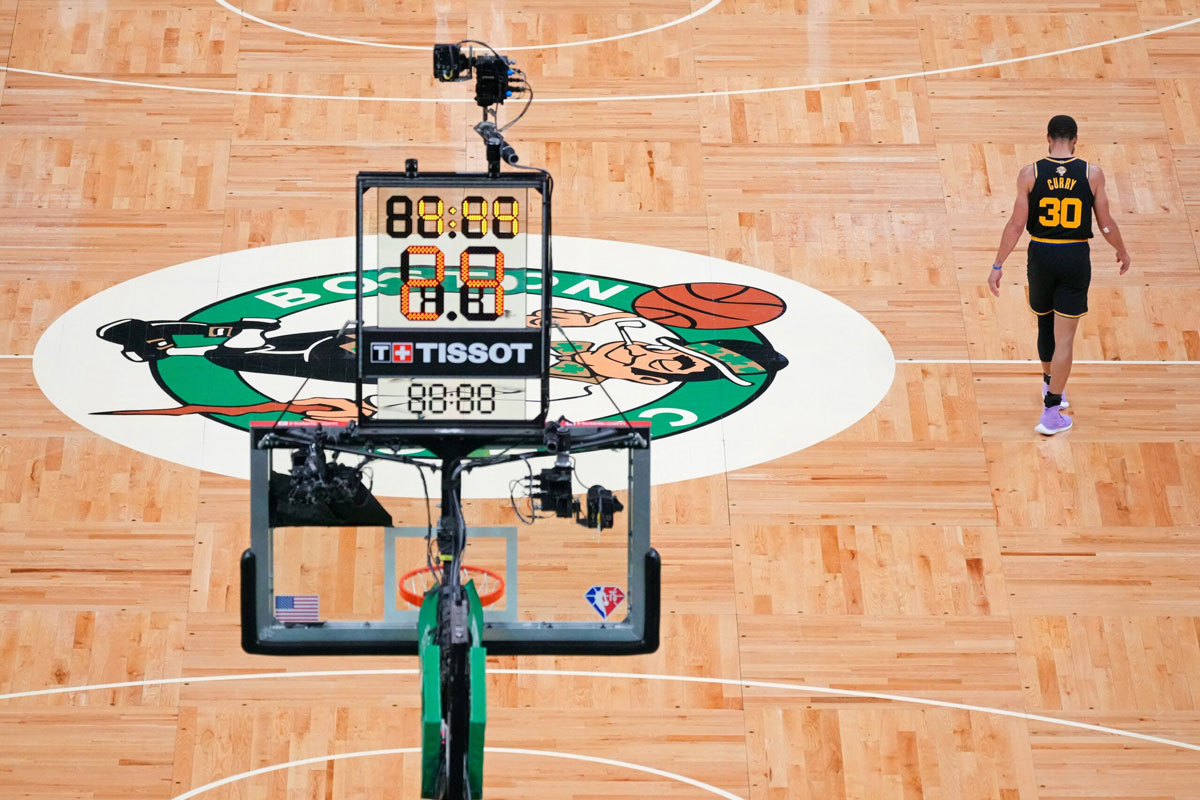 That’s what Muhammad Ali and the team in his corner shouted back in the day, when he got his belt back, but wanted to face the real opponent to his throne.

That’s kind of how some die-hard Laker fans, not uttering that expletive laced call and response off HBO’s ‘Winning Time’, have wanted it to be. Actually rooting for Boston.

Yeah…like we even have a horse in the race right now.

But those wanting the storied Celtics to return to championship status, so they can make their rivalry with the Lakers legendary again, like myself, need to pump the brakes.

Because this series is far from over like a dubbed dynasty.

Sure, the Celtics confirmed home-court advantage the day before yesterday in the Garden. But they’ve just lost it now, as Steph Curry cut all their flowers.

And give Andrew Wiggins and his 17 points and 16 rebounds his too. Like Steve Kerr said, they don’t make it to The Finals without him.

All tied-up thanks to Chef Curry stirring the pot. We can’t wait to taste what comes out the cauldron that is this court next. On a series more legendary than ‘Game Of Thrones’.

As the Wilson rolled through the basket twine-and-twine again, Steph was on video game mode, with 43 points, 10 rebounds and more flexes and mean mugs than Golds Gym after work.

Joining Jordan and James as the only player in NBA history above 34 with 40 points or more in a Finals game.

This is one of the greatest NBA finalists of all-time.

Pushing the rock like weight, he was cooking hot as the Celtics could only carry 6 points over the last seven minutes and change.

That many points against the Death Lineup of the Dubs sounds like a funeral march.

Four Celtics had double figures at home. Jayson Tatum leading the way with 23…off 23 shots. Marcus Smart made 18 off the same amount of attempts. And Jaylen Brown needed 19 for his 21.

That’s not going to get it done.

Meanwhile, Klay Thompson had 8 of his 18 in the final frame.

This could be the momentum shift.

Yet you best believe that when it comes to this series that is now technically reset, a 107-97 Warriors win won’t be all that she wrote.

Boston could have taken a lead at home that would have put Golden State on the ropes in a state of disarray. But with their back against the wall and parrying, the Warriors came out fighting, and now it’s all square.

Time to find out who likes Mondays for a pivotal Game 5.

The next one to get the most baskets may just win it all.

I know I won’t again.