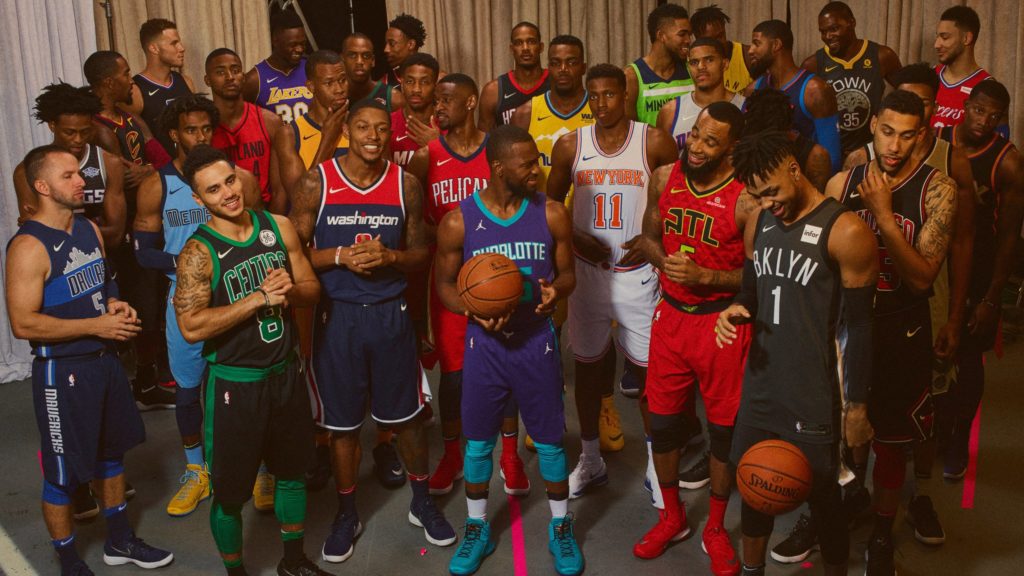 Thread to application, Nike really are tapping into their new NBA jersey campaign.

Scoring right past Adidas’ three stripes in just a swoosh, Nike have spent the summer providing new home an alternative Icon jerseys for every team in the Association. But this weekend they went one third tier further by introducing another alterative jersey for the road.

And these ‘Statement’ jerseys are really making that as the leading sports brand took one player from every of the National Basketball Associations 30 teams to unveil these new court clothes on the hardwork at Sony’s hallowed pictures studios.

And it really was a Hollywood roll call of players. As everyone from the Dubs’ Kevin Durant to The Land’s J.R. Smith took to the stage to debut these new duds from the wardrobe to the parquet. And what a bunch of garments they were in uniform. For the most part franchises stuck to their classic best. Like Julius Randle in Lakers purple, to Denzel Valentine in Chicago black. Other teams updated some of their iconic looks from the trimmings of the Knicks and Celtics looks to the Christmas script of the Sixers and Blazers seams.

But some of the best of the rest really went bold. From the Seahawk, neon, Mountain Dew lime highlights of the Minnesota Timberwolves who already own the best of the new era collection of Nikes. To the OKC Thunder navy shirts that will be as sought after as the new free agent acquisition sporting Paul George’s best in the league sneakers. Not to mention the city of the champion Golden State Warriors jerseys that alternate from the lines of their future San Fran tram home and away and honor their Oakland roots of ‘The Town’…expect these ones to grow across The Bay like that bridge. But easily the best of these rebooted jerseys belong in the B.K. as new Brooklynite D’Angelo Russell showed off the grey stars of the new BKLYN Nets charcoal cuts that are pure fire.

But there’s much more to these new Nikes than just how they look. You see that official NBA label at the bottom that normally tells you what size you are wearing? Well it’s time to untuck it and tap as NikeConnect technology in this screen digital age allows fans the ability to download premium content at just the touch of a fingerprint button. This highlight package content includes pregame arrival footage, exclusive access to game replays and what every fan wants to hear, individual fan playlists. Time to see who is rocking the Chilli Peppers in California and whether every Raptor in Toronto really rolls with Drake.

Gamers will be swiping this contactless app too as buying real jerseys unlock NBA 2K18 boosters that unlock digital content like a cheat code. But why download a 2K18 jersey when you can buy the real thing for the 2017/2018 season?

Now that’s a statement of connection. Time to plug in.