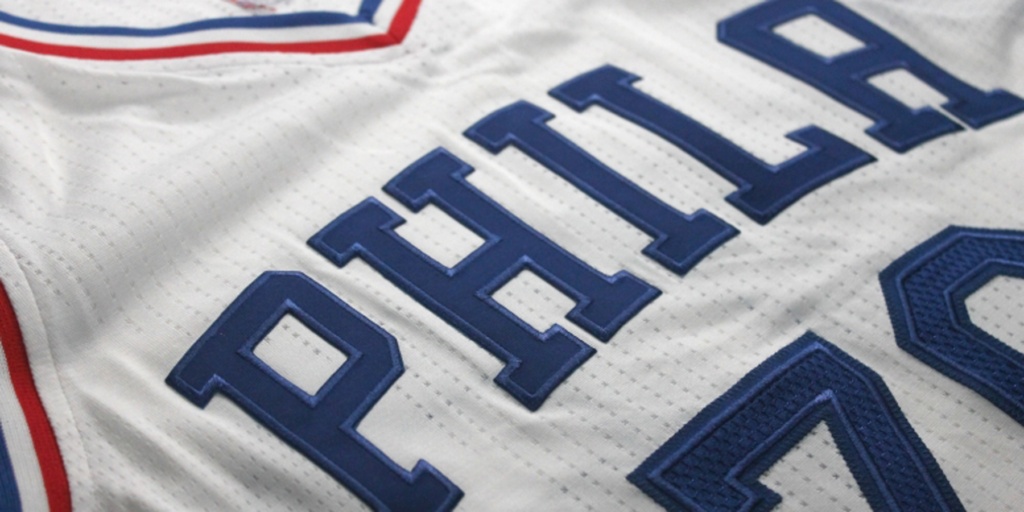 The season may be over, but the Philadelphia 76ers have just beaten the Los Angeles Clippers!

They’ve blown them out in fact. After the Los Angeles Clippers released their “new” jerseys that have been leaked and disgraced for months, as cupcake campaign after Conan campaign shoved them down fans wardrobes, the Sixers responded last night with a more simple, straight forward and classic approach to unveiling their new identities.

Months after their classic blue wrap-around update on their iconic logo, to join their cracking Liberty Bell and dribbling Ben alternatives, the Sixers proved that all it takes is a few tweaks in honor of their franchise and cities history and heritage. Last night stars of the future Nerlens Noel, Joel Embiid and Jerami Grant unveiled the teams new, instant vintage classic jerseys to fans and legends like Darryl Dawkins, Moses Malone and Allen Iverson (to chants of “MVP…MVP”!).

The red, white and blue of one of America’s most famous National Basketball Association franchises aren’t much different then the last mark incarnations, but like an Iron Man suit the subtle alterations are sublime…especially with the alternatives.

The home white and away blue looks for the Sixers now have the iconic ‘Phila’ printed across the chest. Just like the classic jerseys from the 60’s worn by the legendary likes of Wilt Chamberlain and Hal Greer. If that wasn’t inspirational enough, the influence of Dr J. Julius Erving’s 1983 championship team is improvised for the red alternative that keeps the Sixers name first and foremost on the vest.

Hitting the streets of Philadelphia, this “Phila Tough” traditional and hallmark look is terrific and as honorable as the stars and stripes siding. With only a few changes the legendary teams iconic look is now complete. Perhaps it’s something the Clippers should take design note to.

After years of wanting to move away from the Lakers neighborhood in Los Angeles they changed their now, iconic throwback logo to something that people are saying looks like the logo for NBA Live…and we all know what look EA Sports have been having lately. Although the home white jersey looks OK the red alternative with the logo debuted on the Conan O’Brien show is just laughable, looking like it was made by Barbarians, with many comparing the logo to looking like that old cell phone game snake.

Nobody’s winning this game. As a matter of fact throw in the leaked but soon to be unveiled white and black alternatives and you have something that most fans have mocked for looking like they where created on Microsoft’s old Paintbrush programme.

And to think Conan didn’t make any jokes about this. Those old Clipper jerseys where buzzing too. These are just a buzz-kill, even with the great Lance Stephenson trade. Did he sign up for suiting up in this? If the Clippers wanted to distance themselves from the Los Angeles Lakers it would have been much simpler if they moved out of STAPLES…come to think about it after all this…it might even have been cheaper.

When it comes to the red, white and blue, this week Philadelphia is America’s finest.