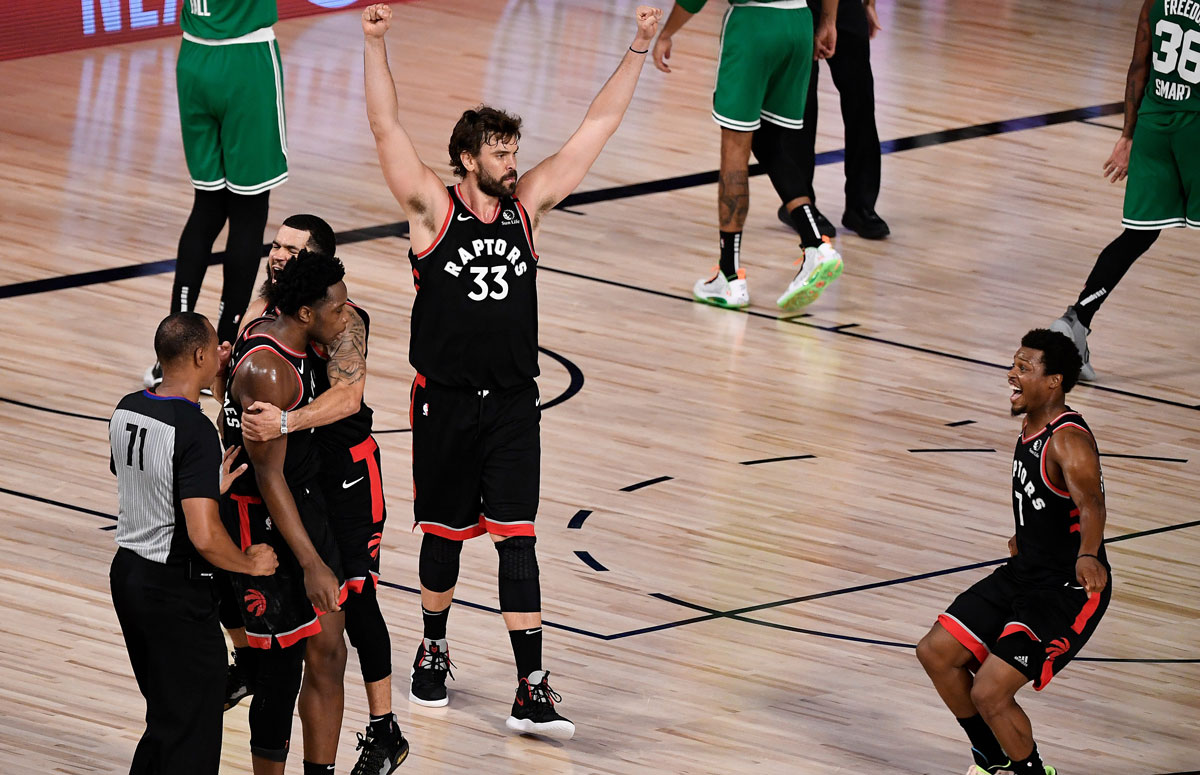 In the aftermath of the shot that saved the Toronto Raptors’ season and preserved their title defence, OG Anunoby was his usual dispassionate self.

He barely reacted when he hit a corner three-pointer with 0.5 seconds left, off a cross-court pass from teammate Kyle Lowry that somehow escaped the reach of 7-foot-5 Boston Celtics centre Tacko Fall.

Anunoby was stone-faced as he deadpanned answers in an aloof post-game press conference.

How did it feel when he hit that improbable shot on a play that wasn’t designed for him, giving the Raptors a 104-103  win over the Celtics in Game 3 of the playoffs’ second round?

What was going through his mind when the shot went in?

This is how defending champions are meant to behave. Businesslike, confident, even-keeled. And there was more than one mention of this even keeled-approach in the post-game presser.

The Celtics have been, quite simply, the better team. They’ve stifled Pascal Siakam, the Raptors’ most potent offensive weapon, and have consistently made big shots where the Raptors haven’t.

“It’s definitely a momentum changer,” said Anunoby of the victory. “We just try to keep winning.”

In this game, the Raptors trailed 57-47 at halftime and appeared on the ropes. They steadily punched back in the second half, but Siakam was a shadow of his regular-season self.

He had just 16 points in the game on 40 per cent shooting, though he made a crucial three-pointer down the stretch.

The Raptors backcourt, led by Lowry with 31 points, six rebounds, eight assists and two steals; and Fred Van Vleet (25 points and six assists), was what kept them afloat.

Lowry deflected praise in the post-game presser and joked about having “balls of steel” after taking a knee to the groin late in the game.

“The pass was nothing,” he said. “That’s OG’s moment …. The shot was everything.”

Lowry was aggressive throughout, something he attributed to a pre-game text message from a close friend.

Who was it, a reporter asked.

“None of your business.”

Lowry spoke in the weary and measured tones of a defending champion who knows his reward for rolling this boulder up a hill is to see it roll back to the bottom of the hill and roll it back up again, then repeat the process several times.

“At the end of the day, basketball is just about playing extremely hard. We just go out there and do our jobs.”

In Raptors lore, this shot will go down as a crucial play in a memorable game in a season where everything seemed off-kilter.

The challenge here is pretending as if all this is routine — as if defending a championship in a bubble in a pandemic is even remotely close to business-as-usual.


“The group is resilient. Next-game mentality,” said Anunoby, in a way that almost made you believe it.

“I expected to make it [the shot]. I don’t shoot expecting to miss.”