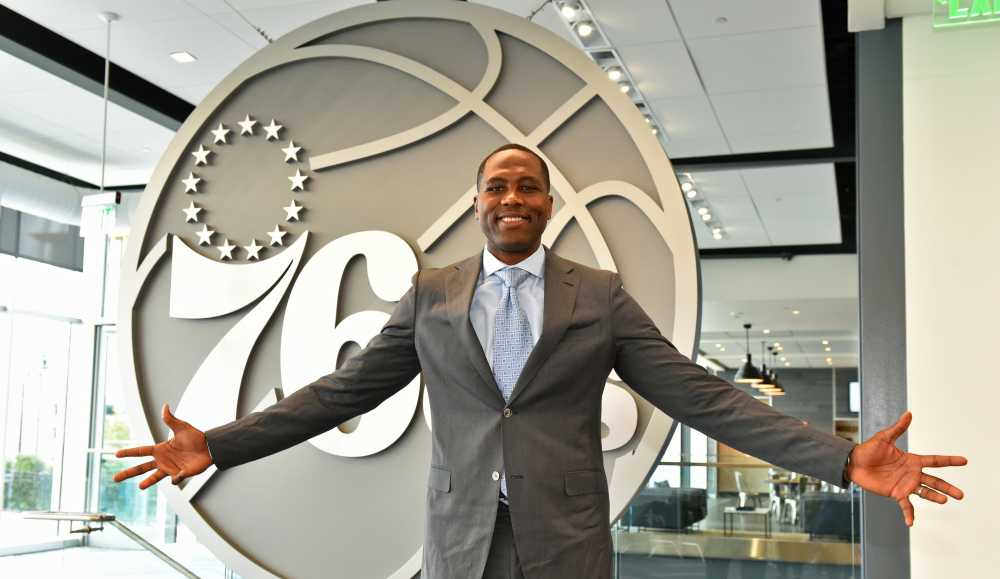 Sixers are now the richer. As Philadelphia have answered the call to who will replace Bryan Colangelo as the franchises new General Manager.

Back when Allen Iverson was somewhere between crossing up G.O.A.T. Chicago Bulls and stepping over Goliath Lakers like Lue, Elton Brand was winning co-MVP honors with Houston Rockets franchise player, Steve Francis. Then the Baby Bull who shared a portion of the United Center frontcourt with big-man Eddy Curry joined a young Clippers team of Darius Miles, Corey Maggette and Lamar Odom destined for greatness (think the Lakers last year). But then one of the smoothest All-Stars (I won’t forget how he hilariously responded to an A.S.G. snub by saying, “It’s O.K. I can spend the weekend with my wife and kids…oh wait! That’s right. I don’t have a wife and kids”. He ended up filling a West spot anyway) was the focal point with more at steak in Philly, during the lean years between questions after A.I. and the pre-process of Simmons and Embiid. After his prime-time Elton keyed in some seasons with the Atlanta Hawks and Dallas Mavericks before he returned to Pennsylvania and retired with the 76ers. Where he will now finally be the one.

The team you sit with last before you take the rocking chair always says you’ll remain family and a part of this franchise, which is certainly true in Elton Brand’s case. As the former Power Forward has now been named the new General Manager of the Philadelphia 76ers. And we couldn’t think of a better man for the job. Unless Allen answered the call. But we don’t see him in a suit anytime soon. Although we’d love to see him change the game again with the front office dress code.

Brand approved. Elton was epic in leading Philly up the ranks like Rocky up those steps. And he’s the perfect young veteran statesman to lead the ‘Creed’ Michael B. Jordan generation. He looks like he could still play. But he need not lace ’em up. Philadelphia are such a young powerhouse this Lakers fan was almost fearfully sure the King would sign here before James chose Hollywood over taking a crack at the Liberty Bell. But right now Philadelphia has more big names than when Bruce Springsteen sung about the streets of Neil Young’s ‘Brotherly Love’ to a movie starring BOTH an Oscar winning Tom Hanks AND Denzel Washington (“Okay”!).

Who needs LeBron when you have the real Rookie Of The Year just like him in Ben Simmons. And we can’t talk or tweet enough about the future of the big mans game in Joel Embiid. But its not that seven footer the former center of attention Elton Brand needs to mentor. But last years number one rook Markelle Fultz, who has as many questions as he does potential surrounding his name. But couldn’t the same be said back in the playing day when it came to The Answer? No question! And in responding to the call, who better to relate than a former player? One that once again could lead them to the playoffs and maybe this time, beyond.