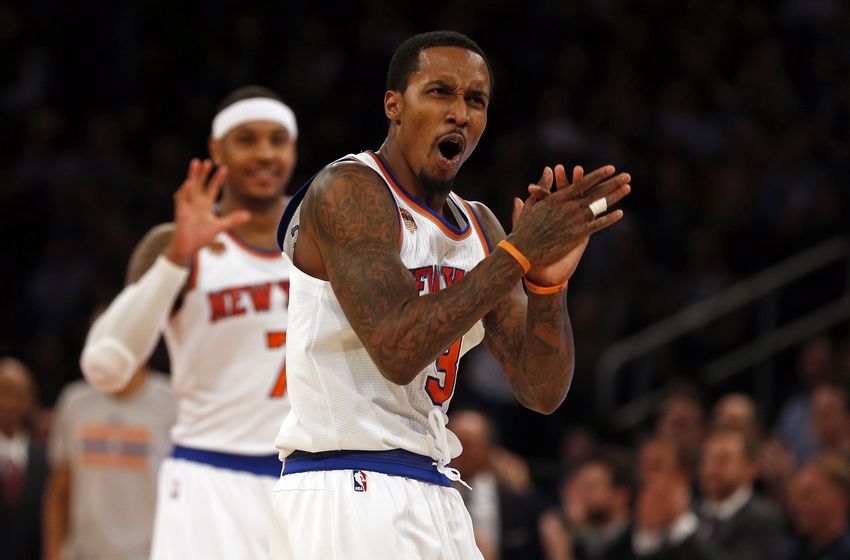 Live in New York City like Saturday Night, Basketball Buzz was in town and the Mecca of hoops, Madison Square Garden last night as the Portland Trail Blazers looked to take a bite out of the Big Apple Knicks.

But as ‘Ghostbusters’ star Leslie Jones was sat courtside next to Captain America’s Winter Soldier, Sebastian Stan it was Derrick Rose who had the strong arm like the metal of Bucky Barnes, firing from his proton pack.

In a game that was a scrappy as New York sidewalks, but still as entertaining as the earths core of show-business a few blocks up in Times Square, Derrick Rose was erratic as he was epic when it counted. With former Bull teammate Joakim Noah out for the second straight gig with a Winter illness, Derrick took the horns. And Pooh produced as many thorns as he did times he came up smelling like his namesake (his surname, not nickname (even if it almost looked like that)). The ever patient Madison Square faithful begged him to drive or pass to his open All-Star teammates as he made more bad decisions than his nation in the last month. Alas when it all came down to it, following a drive and slight of hand scoop lay-up that now belongs in the highlight reel of his careers greatest moves, Rose threw up a clutch shot from the concrete of 6.8 seconds to go that grew into a game winner as the Knicks blazed Portland 107-103 at the end of regulation.

D-Rose wasn’t the only Knick who struggled as Carmelo Anthony may have had 17 points and other court contributions but he was looking to build the same house the Commodores were talking about in N.Y.C.’s M.S.G.  Nor was he the only star as after Knick coach Jeff Hornacek (a legendary guard himself) warned that the Blazers back-court brothers of Damien Lillard and C.J. McCollum could combine for 40, they actually managed for them a mere 28 (although Ed Davis another ex-Laker L.A. should have appreciated more like Kent Bazemore etc and former Boston Celtic Evan Turner showed out). Dame Dolla knows how to stack and rap them up like bars but last night he was dropping dimes in the form of spare change.

Must Read:
Lakers Look To Bring Yi Jianlian Back To The NBA After Olympics

Thank the basketball Gods for Kristaps Porzingis who continues to be New York’s newly favourite adopted son…even if the fan faithful did almost leave him on the doorstep on draft day. K.P. went nuts with 31 shot and slammed points to go along with 9 rebounds. Rose sidekick backup Brandon Jennings had 11 assists too, while the Knicks Justin Holiday was also shooting to the tune of Madonna’s same name hit. Even Mindaugus Kuzminskas came up big like Dennis Rodman as number 91 had 10 points to go with one huge three late.

Courtside Knick legend Bill Bradley liked what he saw. The Knicks Tape is rolling and running again like 80’s hip-hop legends DMC and D.J. Premier performing their Knick anthem at halftime, even if sometimes live it is tricky to rock or rhyme.

But then again when it comes to the Garden and Knicks basketball (that meets Charlotte Friday after Thanksgiving turkey Thursday) it’s like that…and that’s the way it is.