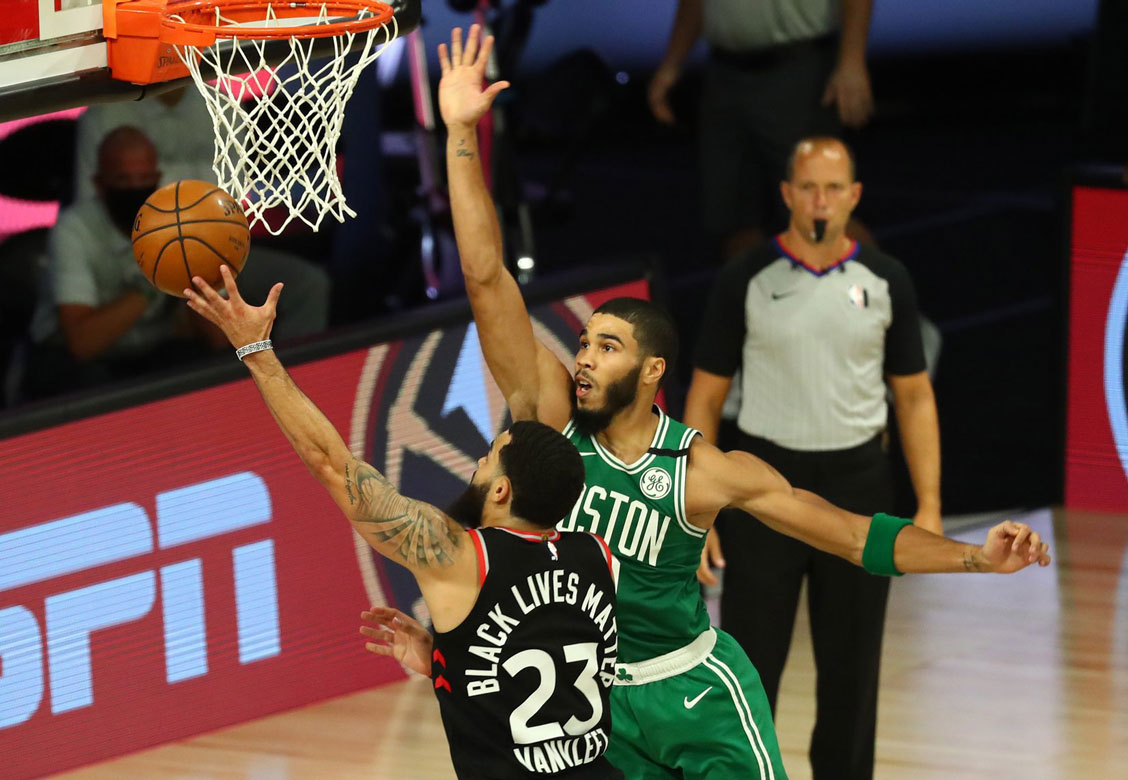 Fred VanVleet landed awkwardly on Marcus Smart’s foot on a three-point attempt early in the third-quarter, and you were tempted to think: Well, that’s it, then.

Game over, series over, title defence over. What a relief.

The Toronto Raptors can go home and regroup and ride out this pandemic like the rest of us.

But Smart was given a flagrant foul on the play, and VanVleet made three free-throws to pull the Toronto Raptors within one point of the Boston Celtics in this must-win Playoff Game 6.

Then VanVleet — the man, the myth, the legend — hit a three-pointer on the baseline on the very next play, completing a six-point possession and giving the Raptors a 64-62 lead, their first since the first-quarter.

On the next play, VanVleet — tough as nails, a man among boys — grabbed the rebound on a missed three-point attempt from Celtics guard Kemba Walker, then hit another three-pointer to put the Raptors up by four.

“That was a little spark to get me going after a crappy first half,” said VanVleet post-game

“That was big for us in the third — have a little burst there to give us a lead and just kind of change the flow of the game.”

Then the Raptors offence began to click. Several decisive plays led to shots that rattled in after so many misfires earlier in the series.

What followed was one of the most anxiety-inducing stretches of basketball the Raptors have seen since last season’s NBA championship run.

The Celtics tied it 98-98 with two minutes left in regulation, and both teams had chances to put the game away late, but couldn’t.

Must Read:
Young Over Old! Swaggy P Goes For Three In San Antonio

Raptors forward Pascal Siakam missed a three-pointer at the buzzer, and the game went to an evenly-played overtime period in which Raptors guard Norman Powell took — and missed — the final shot.

But Powell was huge in the second overtime, finally breaking out after a series of lukewarm playoff performances. He finished with 23 points on 6-11 shooting, including several big shots down the stretch.

“We just continued to stay together,” said Powell. “Everybody continued to make big plays and trust one another, and I think that’s that’s real Raptors basketball — trusting one another, continue to play no matter what we’re faced with, and we were able to pull it off tonight.”

Raptors point guard Kyle Lowry was once again the lynchpin, scoring 33 points to go with six assists and eight rebounds. OG Anunoby had 13 points and thirteen rebounds, and was off the charts with poise, hustle and other intangibles.

Centre Marc Gasol, who has struggled mightily on offence this series, arrived with a freshly-shaved head and showed flashes of life, finishing with eight points, two rebounds and a blocked shot.

“I think it was the haircut,” VanVleet joked. “I think he got a little more aerodynamic.”

In this game there were glimpses of the exciting, dynamic, confident Raptors’ team that followed Kawhi Leonard to a title last season. They appeared, then disappeared, and by the end it was tempting to think they are finally starting to figure it out.

“At this time of the year, the numbers don’t matter. I don’t give a damn what percentage you shoot. You just got to get a win,” said VanVleet.

“It took everybody tonight, and everybody had their moment in the game. Big spurts, big momentum swings. And that’s all you ask for, is guys to continue to stay confident so when they get their chance, they can keep firing.”