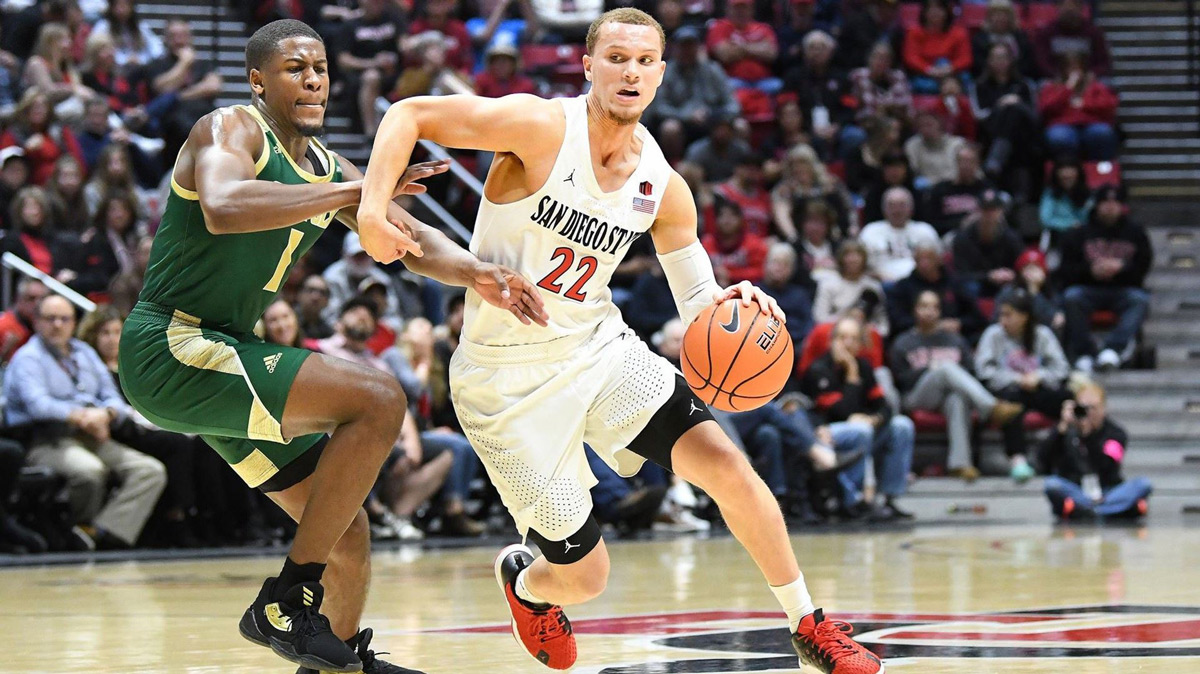 Malachi Flynn breaks down a defender while playing for the San Diego State Aztecs this past season. The undersized point guard went No. 29 overall to the Toronto Raptors in the 2020 NBA Draft. Photo: SDSU Athletics

Is Malachi Flynn the Raptors’ point guard of the future?

All we know for now is, Toronto saw enough in this quiet, confident 22-year-old from San Diego State to pick him 29th overall in the 2020 NBA Draft.

Flynn is just the third player in school history to be drafted in the first-round.

Kawhi Leonard, who led the Raptors to their first championship two seasons ago, went No. 15 overall in 2011 and Michael Cage went at No. 14 way back in 1984, per the Union-Tribune.

Flynn was a prolific scorer at San Diego State, averaging 17.6 points in 32 games with the Aztecs last season as a redshirt junior.

He sat out the 2018-19 season after transferring from Washington State, where he put up 15.8 points and 4.3 assists per game as a sophomore.

At six-foot-one, he’s undersized for his position, and a self-described “late bloomer.”

“Being smaller, you’ve always got to have that chip on your shoulder,” he told the Union-Tribune in a pre-draft profile.

“One of his best attributes is he’s really smart,” said Bernie Salazar, who coached Flynn in high school at Bellarmine Prep.

Flynn gives the Raptors added backcourt depth in an offseason where long-time No. 2 Fred Van Vleet is a free agent and due for a big pay day.

Kyle Lowry, the face of the franchise and perhaps the greatest Raptor of all time, is 34 years and edging toward the twilight of his career.

“Malachi Flynn knows how to play,” said college hoops czar Jay Bilas on the ESPN draft telecast Wednesday evening, held in a TV studio rather than an aren due to COVID-19.

“If you’ve talked to people who knew Fred Van Fleet at that age, they would say that Malachi’s temperament was very similar,” said Draft analyst Mike Schmitz on the telecast.

“Not exactly his game, but just the way he approaches things. He’s not some brash guy, he’s not all that vocal, but he demands respect from his teammates.”

Memphis centre James Wiseman went No. 2 overall to the Golden State Warriors, where he may play alongside Canadian stud Andrew Wiggins, though Wiggins has been the subject of trade speculation.

Just before the Draft, news broke that Warriors guard Klay Thompson had suffered a leg injury during a pickup game. His status was unknown, but it sparked questions about whether or not the injury would alter the Warriors’ Draft strategy.

LaMelo Ball, who Schmitz listed as the top overall prospect, went to the Charlotte Hornets at No. 3.

The Raptors selected guard Jalen Harris at No. 59 overall, with their only pick of the second round.

Harris is a high-volume scorer out of the University of Nevada who averaged 21.7 points, 6.5 rebounds and 3.9 assists as a junior.

For the first time in recent memory, no Canadians were selected in the Draft.