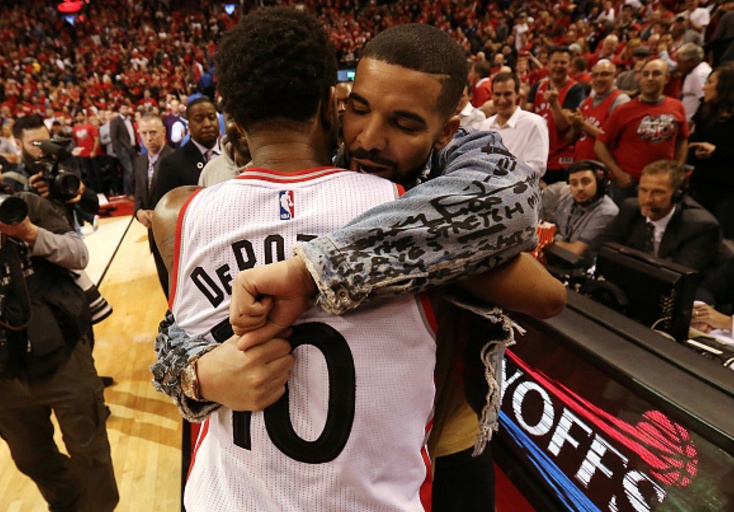 Even with his Ant-Man like view from the giant CN Tower, Drake can see the Raptors rule Toronto right now.

The Raptors have just dropped the Pacers in a May day K.O., around the same time Octobers Very Own dropped his brand new knockout album ‘Views’. Next rounds on Aubrey!

Dinosaurs aren’t extinct in Canada, they were just kept on ice like Captain America.

And after a Civil War with the Indiana Pacers the Canucks broke the picket fence and will now advance to the second round of the playoffs for the first time in 15 years. We’re talking “since Vince Carter was on some through the legs arm in the hoop (stuff)”.

Today is Pacers star Paul George’s birthday, but you can bet the man with two first names won’t be celebrating whatever names on the cake after the Raptors blew his candles out. Put a party hat on him all you like. Sure he’s had a season like no other, coming back better than ever from an almost career end. And that Instagram insult to injury from Toronto owner and rapper Drake has been quashed…but so has his team.

Now if you’re reading the latest SLAM magazine, check the cover. Drizzy and the two Raps DeMar DeRozan and Kyle Lowry really are Gods when it comes to the 6. They’re the future of this NBA.

Still after escaping an epic first round with a more than worthy, but equal opponent 89-84, Toronto have begun clowning again like their red mascot. Twitter trolling Indy with Vanessa Carlton gifs and Simpsons memes. The Indiana Pacers may already be dead, but the Raptors could soon follow them in extinction if they confuse confidence with cockiness.

Must Read:
Welcome to the NBA's 75th anniversary

Still you have to condone celebration and as the Canada cold look to cool off the Heat in round two they need this hot streak. They want to take their talents to South Beach and actually make it back out unlike their former franchise face Chris Bosh, who they will face along with Dragic, Deng, Whiteside, Winslow and some guy called Dwyane Wade. You know what happens when fire meets ice? And we aren’t talking about Elgin Baylor and Jerry West. It could all be over in a flash!

But then again for a decade and a half this team weren’t even meant to make it out the first round…let alone the playoffs. And they’re still here with fire and desire…you with me?

Or more appropriately them?

Basketball is buzzing in the T-Dot like the biggest All-Star game in recent years once again. Like a Blue Jay they’ve just took the roof off and knocked it out the Rogers Centre park with views on the tallest plateau they can reach.