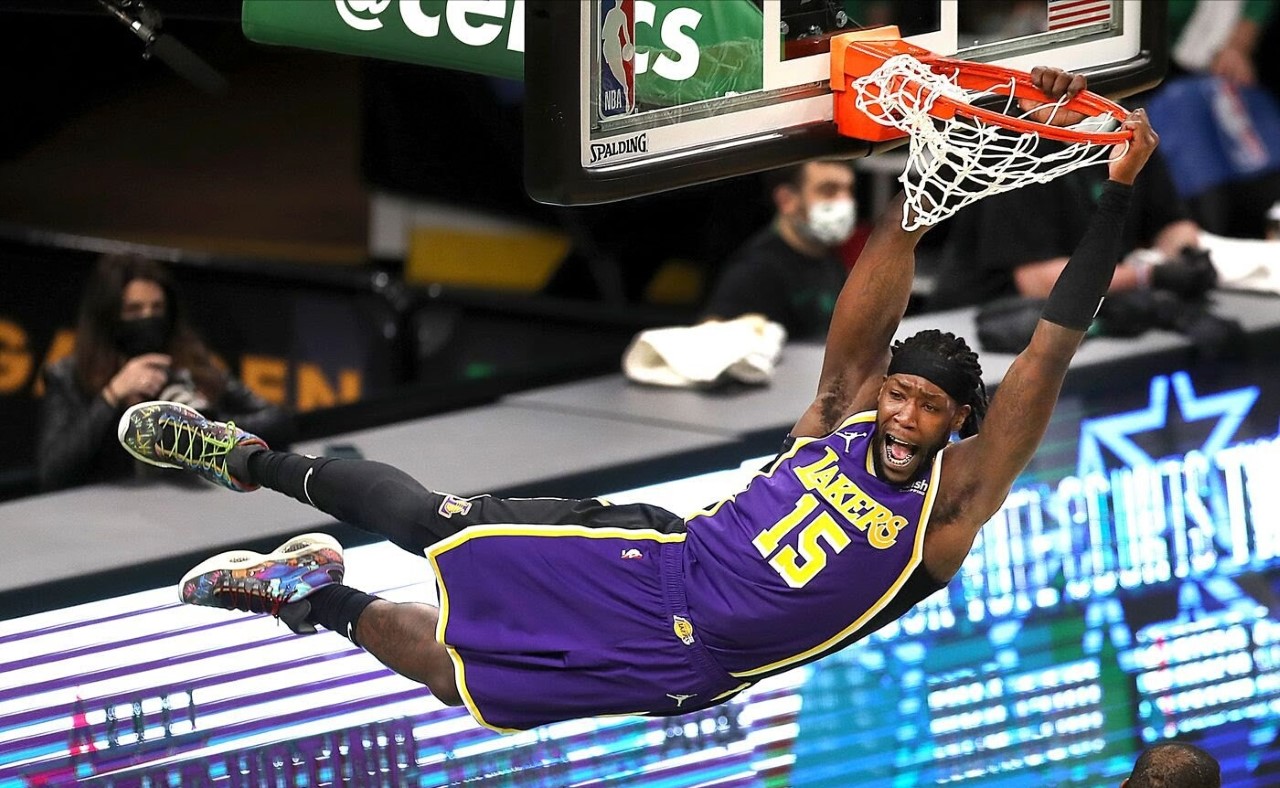 Shaq sized dunks bigger than the Hollywood sign used to rock the rim so much in LA they brought the whole backboard down, smashing glass.

When Lakers big back-up Montrezl Harrell rips the rim it’s like he’s trying to shake the whole foundations of STAPLES, like when he crossed locker-room’s this off-season from the Los Angeles Clippers to the Lakers.

Now the reigning NBA Sixth Man of the Year is aligned with the throne of the reigning NBA champions expect him to be dripped in more ice in Hollywood…and gold for that grill. Becoming the second Clipper to Laker to switch jerseys after posing for a picture on an iconic SLAM Magazine classic cover remix following another former winning Sixth Man like Lou Will (who has also spent time in purple and gold) in Lamar Odom.

This truly rocks the “familia”.

But Montrezl is a monster like that Kanye beautiful, dark, twisted fantasy with Rick Ross and Nicki Minaj. You can tell by the way his dreadlocks fly like the twine when he puts another one back through the hoop with the fury of hanging up a payphone after an argument.

You can call on him.

With all due respect to the big moves the Lakers made this summer, nothing is as monumental as this. Despite Dennis ‘The Menace’ Schröder being the most offensive PG the Lakers have had since Nick ‘The Quick’ Van Exel in ’96. The same time yours truly became a Lakers fan aged 11…and to give you some perspective I’m in the same father time class of LeBron. This good German guard gives the Lakers a big-three, but he’s still not the biggest thing.

Neither is the European connection and reunion redemption for the Lakers with the Spaniard Marc Gasol whose draft rights the team traded for big brother Pau and all those championships that came. Even in big Marc’s Sabonis years his outstanding outlet passes are a thing of basketball beauty. A gift from the Gods. But still, that’s not even the biggest thing.

Neither is the big spot up shots of Wesley Matthews Jr. from downtown Los Angeles who also has a family connection after his father Wes Matthews Snr. was a part of Magic’s 80’s Showtime.

Even the LBJ and KCP alphabet soup mix of the Hollywood star potential of THT whose breakout makes him feel like a new player is not contributing quite as big as this.

Even if he comes closer than close.

The Lakers left millions on the table for Dwight Howard before he ended up being processed by Philly alongside championship teammate Danny Green finding the redemption last week in a win. They even traded the epic enthusiasm and energy of JaVale McGee to LeBron’s former land for a garbage time player and another they cut like they did two heads off their Anthony Davis leading Ghidorah like front-court monster. And just look at how well AD’s former Kentucky, Pelican and locker room Laker teammate DeMarcus Cousins is doing in Houston with no injury problems.

It doesn’t matter if locked up for five more years, ‘Bron and the ‘Brow are like Godzilla and King Kong this looked like it was going to stunt the new show in Hollywood.

That was until all that capital saved lead to the exclamation point of Montrezl who is a mon-STAR like ‘Space Jam’ too.

Now this one is for all the carrots as he’s bugging out.

With a smooth shot on Kuz, Caruso back on the All Star fan favourite ballot (and I didn’t even vote for him this year), Pope praising his contract for all it’s worth and Markieff Morris hustling like his twin on the opposite side of STAPLES, the battle for Los Angeles and the finals court countdown to come before next Summer looks even at this time ready to be called.

The only thing that could possibly beat the Lakers outside Steve Nash’s biggest three in Brooklyn is themselves. Or that tired old curse of complacency. But when you have the chest pump energy of a hustling and offence harassing Harrell then that’s not likely to set in. Passion seeps through his veins and when he trademark screams following a typical put back it’s like STAPLES let fans back in the stands.

Must Read:
'The Truth' Will Be Set Free This Season

LeBRADY James may have had another legendary line with a triple double of 28 points, 14 rebounds and 12 assists in another touchdown overtime victory for the Lake Show at home against Oklahoma tonight, but the King couldn’t do it without all his men. Peep James’ Piston beating clutch shot from their last double OT win against their new bogey team. Ready for wine he passed it all off with Danny Glover, “I’m getting to old for this ‘ish” waving off gesturing after his downtown dagger, Lethal Weapon shot down Detroit.

One of ‘Bron’s best band of brothers is the soldier in the headband with dunks ready to give opponents battling in the paint head wounds.

Harrell’s 21 points and 8 boards were guitar and rim rocking instrumental in LAL’s 119-112 win over OKC. And then one BIG block sealed the deal as Lakers color commentator Bill Macdonald put it the best since the time he compared that courtside Karen giving LeBron mess in Atlanta to the ‘Desperate Housewives’ pointing actress and cat meme.

Can’t get past this.