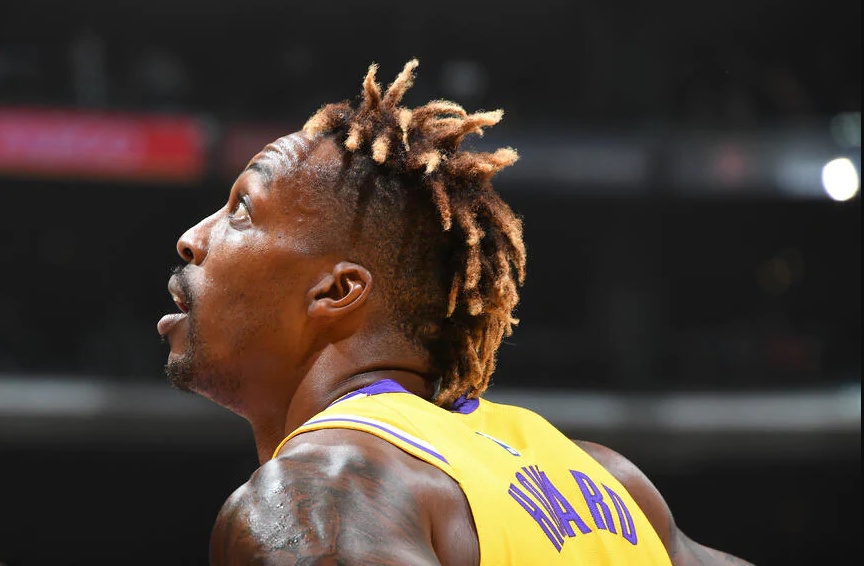 The Death And Rebirth Of Superman, Dwight Howard

“Thunder cracks and we see television store screens and surrounding lights go out. We hear and see footsteps run out of the phone booth and then take off. Left behind in the phone booth is a full suit. Glasses drop to the ground and smash. An earthquake like rumble spreads through downtown as birds fly away in fright. A child playing with a toy airplane in the back-seat of a car stops and looks out as something hurtles past at supersonic speed.

Rushing past the electrical store the televisions flicker between static and footage of a Lakers parade. We cut to L.A’.s landmark Hotel Figueroa where the three tiered building displays pictures of Wilt Chamberlain, Kareem Abdul-Jabbar and Shaquille O’Neal shining like three stripes. A stream of purple and gold zooms past at full speed. We follow the stream as it zip-lines through the skyscrapers of downtown Los Angeles before soaring to the sky between two.

We then see the sky from the top of the two sky scrapers and between the darkness appears some gold and what looks like a basketball hoop. We hear the flapping of a cape as a basketball shoots up and is followed by an outstretched hand. We see the man from the phone booth as Dwight Howard, donning a Lakers uniform and draped in a purple and gold cape flying upwards after the ball.

It’s almost in his reach as a newspaper with the headline ‘What’s happened to the Lakers?’ and one with the headline ‘Where is Dwight Howard’? along with what appears to be Mickey Mouse ears fall behind him. As Howard gets higher he cocks his hand back and smiles as the gold light shines on his face as his hand makes contact with the ball. The theme to Superman begins to play and get louder. As his cape flaps violently and he begins to slow down, he looks to dunk while disappearing into the gold light which fills the screen.

We switch to a shot of the Los Angeles skyline as the clouds disperse and the lights of the city including the STAPLES Centre come on in a sharp burst. The headline reads; ‘Superman Returns’ and then ‘Impossible Is Nothing’ before the Adidas logo appears.”

That’s how I wrote an article and Adidas commercial idea concerning Dwight Howard’s signing with Kobe’s Lakers almost ten years ago like it was the second coming of Shaq’s Superman out the phone booth. So much so I even sent it to ‘He Got Game’ and ‘Kobe ‘Doin Work’ director Spike Lee. What a difference a decade makes. D-12 and KB24’s Hollywood honeymoon period made number 8 and the 34 up there in the rafters’ Hollywood divorce look like the matrimony of a happy marriage it turned out to be in the end. For better or worse.

And Lakers nation echoed those Mamba sentiments when Howard’s end returned with the Lakers this offseason following the season crippling injury to Anthony Davis big-man back-up Cousins. Wondering why they left Carmelo hanging again like that time he pretended to take that shot sitting courtside from the baseline and then thought…NAH!

Must Read:
Believe in Jayson Tatum as Boston's next classic Celtic

But what a difference a few games makes. From the punctuated preseason, to the first run of six straight after dropping the opener. The King’s new Lakers look ready for their ring crowning with A.D. and his King of Monsters, Ghidora big-three headed blocking machine of him, Howard and the epic, energy emphatic dunk and block of fan (and mine) favourite JaVale McGee for your seven footers. And just wait until Boogie comes back for the down low productions. The Lakers have more options in the post than phone plans. And now the legendary Laker lineage of big-men isn’t just joined by their latest Pau Gasol revolutionary pivot in Anthony Davis, but even more big names in reserve than they’ve ever had in Karl Malone, Horace Grant, John Salley, Elden Campbell or Bob McAdoo storied history.

Now this really is a Hollywood script flipped case of Superman Returns. The death of Superman was as great exaggerated as the soil coffin rising ‘Dawn Of Justice’ movie and now no longer Batman v Superman (or the Dark Knight of Kobe), this league is finally seeing Justice for this former death of a could of/should of been dynasty. There may be some holes in the cape, but fear not the flag is still flying, blowin’ in the wind.

Right now number 39 over 12, Dwight Howard is playing out his mind in this redemption reunion like Basketball God fate sealed. Like he wants another thirty to go up in the banner of the Lakers tall rafters like 33 and of course 34 (he still won’t tell us the personal reasons behind his latest number, unlike the 8 in D.C. that had nothing to do with Kobe). It must be the hair…which even now we can kind of forgive like him…it’s actually kind of cool. A ‘Home Alone’ Biff like tarantula, like his defensive player all over the opposition like ‘Spider Salley’, with post everything precision. Post player, post pain, post shame. This seven feet high and rising rejuvenated like a late career Shaq still younger than LeBron at an Abdul-Jabbar 33, taking giant steps is a cut above the rest he cuts down with his trademark blocks we’ve missed like that Magic smile, or crowd flexing celebrating muscle on a leaner, meaner frame for this players perfect portrait.

Yeah…I’ve changed my tune. But it’s no longer the same song.

“Take off the blazer, loosen up the tie. Step inside the booth, Superman is alive.” Like Jay-Z said in his own retirement return for LeBron’s kingdom come.

Must Read:
A Rose For Kuz?

Quick on the Twitter trigger this offseason, I take it all back Dwight…I’m sorry!

Anthony Davis leads the league in blocks right now in his bid to be the Defensive Player of The Year. But do you know whose second in the NBA right now? Yep…that’s right his back-up and former DPOY himself. Cleaning the glass with put backs like he’s about to break all of that, piecing his career back together. Notching double/doubles under his belt like he always was meant to a starter and is now doing off the bench. He’s even literally the last to leave the gym, staying behind after taking opponents to school and practicing his shaky free throws like Shaq should have. Worthy of his first start like the Big Game he’s producing alongside James, all for the 42 clap.

Remembering the titans on this Texas sweep road trip, just missing the triangle point of Houston for this former Rocketman like Elton John. Coming into the Windy City, Chicago almost blew the Lake Show away. That was until LeBron had his oldest in history and third straight, first Laker since Magic in ’87 triple-double. Right when the Lakers where going “YES” and then “NO” like Martin Lawrence in the new ‘Bad Boys For Life’ trailer with Will Smith after A.D. one night hit a 16 years since Shaq record 40 and 20 in just three quarters, only to the next day reiterate his desire to play in his hometown Chicago, because after all he “is a free agent next year”. Just a day after one of the New Orleans Pelicans he was traded for, Brandon Ingram matched him, 40 for 40. Make that meme Twitter King Josiah… mine pales in comparison.

The Lakers have a lot to celebrate in this new Showtime era. Their best dynamic duo since Shaq and Kobe, or Magic and Kareem. A big-three with the 38-19 run lead by Kyle Kuzma back for good from injury. The soon return of Rondo and hopefully his Wildcat alumni. The threes of Danny Green. Quinn cookin’ from that same angle. The play of Avery Bradley M.I.A. this game. My hero, Alex Caruso. And of course the man of steel II as you saw someone trying to come into his lane. Like bam, bam Clipper legend Quentin Richardson says, the Lakers x-factor. Was it a bird? Was it a plane? As you heard the whoosh of Superman fly through the wind he made in Common’s Chi-city and back again like he went twice around the world to reverse it’s polarity and change his past. NO! It was the huge game and frame of the return of Dwight Howard.

Like Kobe predicted it, that’s a “hell of an impact”. This time for better…not worse.