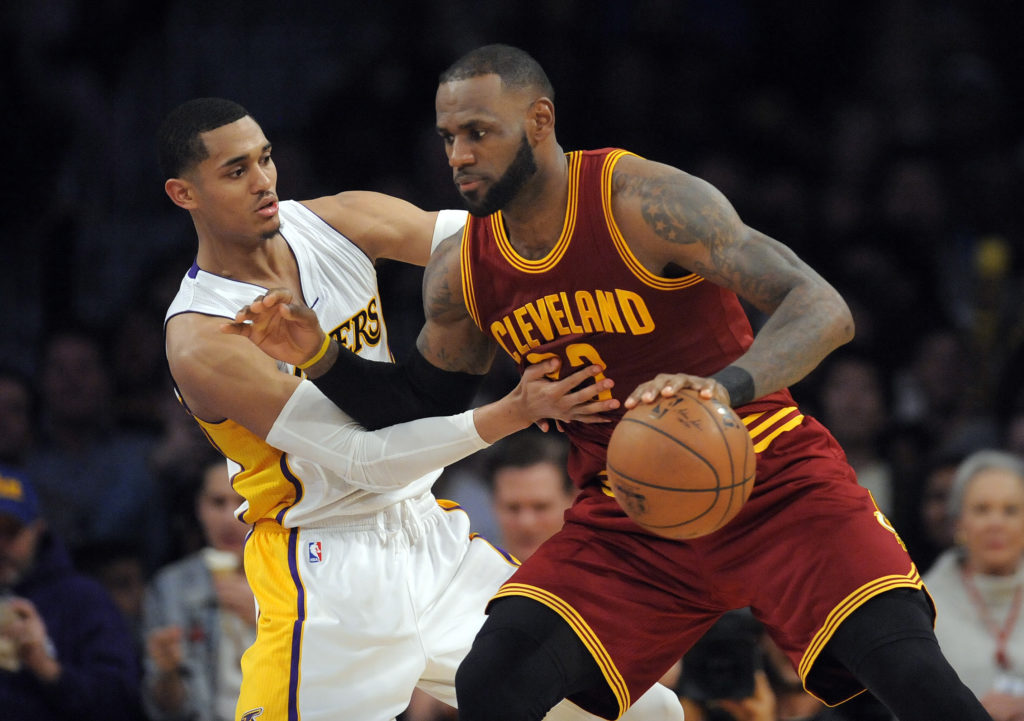 It’s the kind of text you never want to receive from your significant other. But when it’s coming from an agent of the King? Shazam!

According to reports LeBron James’ rep got in touch with Lakers G.M. Rob Pelinka (a former agent of all the stars too…including the Lakers last legend, Kobe Bryant (hell of a reference)) with those two words which may lead to one big one next summer.

This offseason’s free agent period hasn’t even come to a contract signed close and people are already speculating where LeBron will take his talents to next year. Apparantly disgruntled with his home Land in Cleveland Ohio this Cavalier may ride out of town again. No longer believing he has enough true talent to do battle and go to war with the Warriors. With all due respect to Kevin Love and the guy who practically won their first championship on a clutch, Kyrie Irving.

The last time James left home he took off to the sun, sea and sand, bright lights of South Beach with the Chris Bosh and Dwyane Wade talented Miami Heat. This time after trying to make a move for Flash in order to help recruit the King, Hollywood may come calling with a tinseltown ticket if LeBron decides to flip the script again.

But could La La Land really be his land of the LeBron Angeles Lakers?

Would L.A. be a good fit for the King?

Because the Lake Show aren’t taking any chances for their new milleniuum Showtime. Offering everyone like K.C.P. (Kentavious Caldwell-Pope) one year deals for the chance to make room for L.B.J. As they are currently also looking for a free agent, back-up Point to mentor Ball from their own guard Tyler Ennis to LeBron’s teammate, former All-Star Deron Williams.

And the Lakers-who have been cleaning house since the trade of star D’Angelo Russell and contract of former Cav champ teammate Timofey Mozgov for fellow big man Brook Lopez to Brooklyn-seem to be going for the King as much as they are the L.A. native, new Oklahoma City Thunder duo of Laker lover Paul George and MVP Russell Westbrook.

Sitting on a blockbuster throne where movies are made, this could be a big-three of De Niro, Pacino and Scorcese proportions.

Even if this dream team is the stuff of pipes people in the city of stars love to fantasize with their head in the clouds. Especially as LeBron was taking in the young Lakers during their summer league championship run last week, donning a tie-dye purple tee (okay…that’s a bit of a reach). Even Instagraming big baller, Lonzo Ball’s purple Kobe brand Nike’s. A dynamic duo of LeBron and Lonzo really could be one for the ages. Matching a top rookie, pass first, unselfish general with a superstar legendary champion sounds like the makings of where amazing happens. But with one leaving his teenage years and the other turning Kareem’s jersey number in age next year makes for something akin to “in another life” were you just wish they had more time for ‘BronBall’.

LeBron’s 23 will end up in the rafters one day, but whether that will be the one of STAPLES is as unknown as whether Ball’s number 2 will one day be worthy of that ceiling.

If the Lakers and their President Johnson acquire the closest thing to Magic since Earvin then they will have another iconic legend to follow Shaq and Kobe in their storied history of NBA legend.

But just like with George they may have to play the waiting game. As they shouldn’t trade away their incredible young core of Julius Randle, Jordan Clarkson, Larry Nance Jr., Brandon Ingram, Ivica Zubac and now even Kyle Kumza for a chance for ‘Bron to ball with Ball for less years then these decades in the making stars have to develop.

Must Read:
We ARE Playing Fantasy Basketball

Because after all, when it comes to this royal subject what’s a King without his princes?