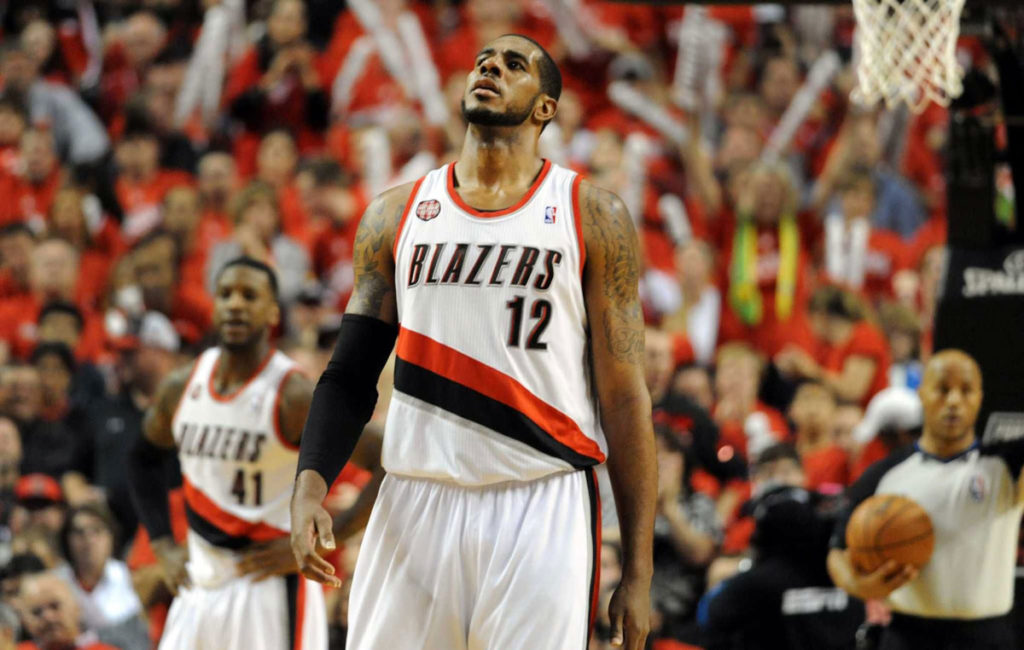 RIP City may as well say R.I.P. to next years championship hopes!

Sure Damian Lillard is one of the best point making guards in this association, but when it comes to contention this dynamo is nothing without his dynamic duo partner LaMarcus Aldridge.

Now it won’t all be smelling of roses next year in the city famous for them if Portland can’t keep L.A. in the P.D.X.

The only Aldridge basketball lovers will see in Oregon next year appears to be a sideline reporter. Which is a real shame because with a couple more pieces this Portland franchise could Trailblaze across the country hotter than when Clyde ‘The Glyde’ Drexler (Happy Birthday C) was here.

But in a Michael Jordan shrug it could all be gone!

LaMarcus Aldridge is one of this Summer seasons most sought after free-agents among an open market class that includes Marc Gasol, Rajon Rondo, a Most Improved (albeit restricted) Jimmy ‘Buckets’ Butler and so much more talent.

Still if you want a real, big star for your post-NBA season future then it belongs with the dry-erase artists depiction of the paint, play-calling Aldridge. So many franchises are interested in this man, even teams from the WNBA are trying to sign him. The front-runners however include the Texan twin-tandem, big potential of Dirk Nowitzki’s Dallas Mavericks and Dwight Howard’s Houston Rockets. While last years losing and history’s most famous franchises the New York Knicks and Los Angeles Lakers have an outside shot like the clutch playoff hero they share, Derek Fisher.

Still one team that could really click with this West best Trailblazer is the San Antonio Spurs.

This time last year the Spurs where parading their own Larry O’Brien trophy, like this years winners the Golden State Warriors across the iconic San Antonio River Walk. This year however, it seems like the reservoirs of talent have run dry. No matter the fact that last years Finals MVP Kawhi Leonard held court as ‘Defensive Player Of The Year’ this season. No matter how good Manu Ginobili and Tony Parker still are. Last years champs still became this years first round knockouts like Sony Liston in 1965. Losing to the Clippers in a series’ final outcome as ugly as L.A.’s new logos and jerseys.

Sure, the greatest Power Forward of all-time Tim Duncan is far from the end of his Hall of Fame careers assembly line. But the robot needs an android like replacement in avengance, in this this Age of Ultron once he shuts it down. Aldridge could be that vision to marvel at for the top of the Texas triangles future before it all becomes Bermuda lost. Aldridge is a 20 and 10 guy that’s so serious and no nonsense, non-purists call him boring. Sound familiar? LaMarcus may as well be a T-Bot clone. ‘Baby Bot’ anyone? Under Coach Pop’s system ‘Marcus could thrive in San An, especially with Duncan’s extra two years signing bonus as a retiring mentor. If Timmy passes the torch to this 30 year old in the prime-time of his career, than San Antonio could still see a contending future and a champagne campaign better one too. While Aldridge could hope for a career and legacy of legend that he never even dreamed of.

It’s a win, win situation enough to Spur anyone on. Time for L.A. to really blaze a trail to the West.