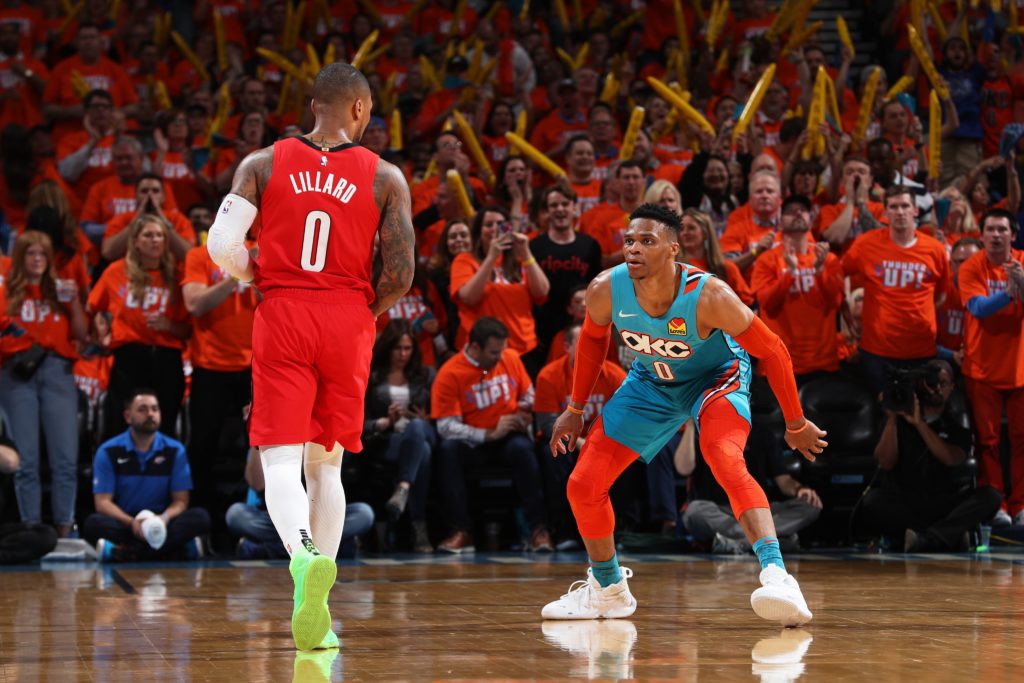 Phones have been checked in Philly as missing posters have been put on telephone poles for Ben Simmons’ jumper. Whilst he has started a beef with Jared Dudley of the Brooklyn Nets that even rivals the one between Kevin Durant staring down Patrick Beverley.

But the real rivalry of this first round that is a real knockout is the one between Damian Lillard and Russell Westbrook. Two noughts to add up to something over nothing that could take this wild West clash between the Portland Trail Blazers and the Oklahoma City Thunder the seven game distance.

Watching these two points make one in the changing of the guard has been where amazing hardwood history happens. And whether the Thunder will reign over Rip City, or whether the city of roses will bloom over OKC all depends on whether the fuse is lit for the stick of dynamite, or the ticking click rings out. Either way whatever adds up to more on the box score will come from nothing.

But these numbers don’t lie.

A Game 3 showdown saw Russell Westbrook explode with a Kareem 33 and the Thunder poured out a 120-108 victory back home as Paul George double pumped a dunk as time expired like old ham on Dame and his men. But up 2-1 it’s not like Portland could blaze a trail to put OKC on the ropes. Even though they want to even things up and take it down to the wire for the next game and week.

D-Lill had 32. But Westbrook taunted that he was “too small” as he rocked the baby with one more point. Denis Schröeder also added 17 and a mock wrist watch tap celebration to Dame like Russell mocking Lance Stephenson’s air guitar against the Lakers. But time and Dame time again, hip-hop star Dame Dolla will play on until this all wraps up.

Laugh now, cry later. Because this one rhymes greater than you’re average player hater. He’s notorious. He’s B.I.G. and he’s ready to die for one more chance to kick in the door, for the skys the limit.

Dame Time runs 24/7 like a 7Eleven and with the ‘Mission Impossible’ fuse of Russell Westbrook never looking like it’s going to fallout like these two, we may need another P.G. by George to settle this score as these two Point Guard number noughts look to cancel each other out until the final score and last buzzer beaten rings out.

Trash talking. Sweat soaking. Until the clock runs out on Dame Time and one of our zeroes becomes hero, we could watch these two men go the full magnificent seven.