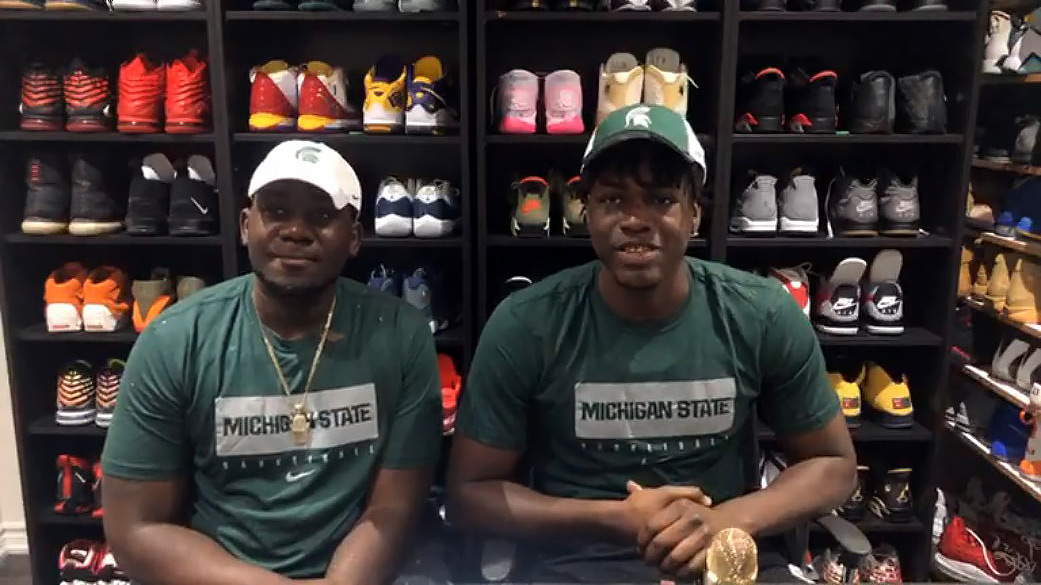 “The goal is the NBA”

Those were the final words from 17 year-old Canadian basketball player Enoch Boakye after announcing his commitment to head coach Tom Izzo and the Michigan State Spartans.

The five-star, class of 2022 center opted to commit early to a Spartans program that also got a big time commitment from Emoni Bates, the consensus number one player of the entire class and projected top selection at the 2023 NBA draft.

Boakye, a towering presence standing 6-feet-10 tall, and a rock solid 240-pounds figures to be right behind Bates as a future NBA lottery pick.

The Brampton, Ontario native quickly caught the eyes of NBA scouts playing for the Canadian national team during the 2019 U16 FIBA Americas Championships in Brazil. The raw big-men scored 19 points and pulled down 17 rebounds in 23 minutes to help Canada secure a 95-78 quarter-finals win over Mexico.

The stellar play continued as Boakye racked-up another double-double with 12 points and 13 rebounds as Canada picked-up a silver medal, falling to the USA 94-77 in finals.

“The fact that he flew down to Canada quite a few times to watch me play even in a practice setting, that meant a lot, he’s the head coach, usually it’s assistant coaches coming down to see you play, but as a head coach to take the time to come see me play that meant a lot to me.” mentioned Boakye as one of the main factors that led to his early commitment to Michigan State.

“It’s been 20 years since he (Coach Izzo) came down to Canada to see a Canadian prospect and that was huge that really touched me and was like, I felt loved,” continued Boakye.

Furthermore, Boakye took the time to acknowledge his number one supporter George Aramide, the president and founder of George Harris Preparatory Academy in Mississauga.

“A special thank you to my number one guy, my coach, my mentor, my friend…Coach George. He believed in me before I believed in myself, words can’t describe how much this man has done for me. I don’t know where I would be if he hadn’t shown interest in me at such a young age. He sacrificed so much for me, over the past two years we flew all-over America to every camp to prove that I belonged. I would like to tell the world it’s not just my moment, this is our moment. God bless him and his entire family.” spoke a proud and humble Enoch about his coach at George Harris Prep.

The last Canadian to commit and play for the Spartans was Montreal’s Maurice Joseph. A shinning star in his own days, Joseph committed and played two years for coach Izzo before transferring closer to home, finishing out his NCAA basketball career at Vermont.

Other notable Canadians to play at MSU include Brampton’s David Thomas who played for the Spartans for four years, (1996-98, 99-01), winning a NCAA national championship in 2000. Thomas is currently in his fourth-year as the Spartans’ Director of Basketball Operations.

The Spartans next door neighbors and in-state rivals, Michigan have traditionally been the ones scooping-up top Canadian talent. The Wolverines began stretching their recruiting pipeline from Ann Arbor to Toronto nearly fifteen years ago when top prospect Jevohn Shepherd committed to play for Tommy Amaker in 2005.

Michigan, joined Kentucky, Gonzaga, Syracuse, Texas as one of the few NCAA schools to boast multiple Canadian NBA draft picks with both Nik Stauskas (2012-2014) and Ignas Brazdeikis (2018-2019) getting drafted into the NBA.

With the addition of Boakye, and Bates not only will the Spartans have the best 2022 NCAA basketball recruiting class, they will be amongst the favorites to win a national title — a goal the young Canadian is also eager to purse and add to his growing list of notable accomplishments.

“From day one I’m looking to win a national championship right away.” concluded Boakye after thanking coach Izzo and the rest of the Michigan State coaches who continue to believe in him.