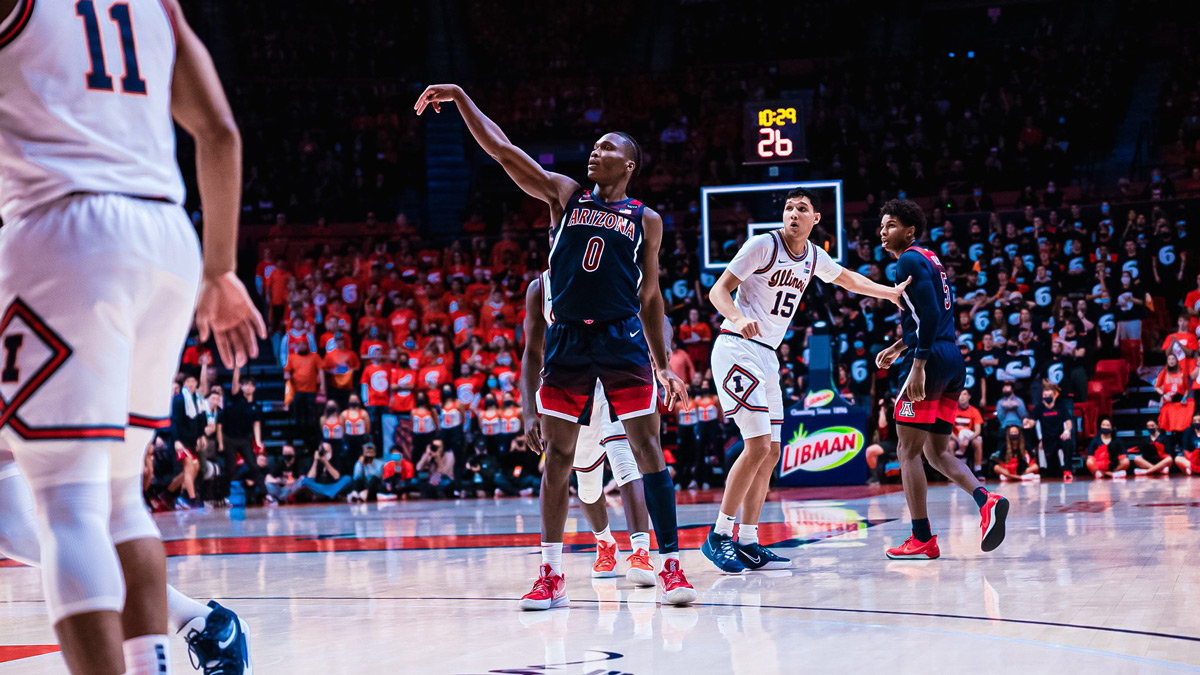 There is nobody hotter on the college basketball scene than Canadian Bennedict Mathurin and the Arizona Wildcats.

Mathurin, a six-foot-six sophomore guard, from Montreal, Quebec is enjoying the best stretch of his collegiate basketball career, lighting-up the scoreboard and putting NBA front offices’ on notice, as the undefeated No. 9 Wildcats (9-0, 2-0 away) make a case for the top spot in the country.

A recent three-game scoring outburst of 29, 24 and 30 points against Oregon State, Wyoming and Illinois, have shinned the spotlight on Mathurin’s team leading 18.4 points per game, 6.7 rebounds on 49.6% percent shooting and 38% percent from three-pointers.

Projected as a potential second-round pick in the 2021 NBA Draft, Mathruin decided to return for his second season to further boast his stock. After all, the Wildcats are coming off a shortened, non March Madness season, following a self-imposed post-season ban for their involvement in the biggest college basketball investigation to date.

Prior to returning to Tucson, Arizona for his second season, the 19-year-old made his Canadian international FIBA basketball debut, helping Canada’s U19 team to a bronze medal at the 2021 World Cup in Latvia. Mathurin averaged 16.1 points, four rebounds and connected on 48.8% percent of his field-goal attempts.

“When I made my decision to come back to Arizona, the first thing he told me, is trust. He told me to trust him.” Mathurin opened-up following a season-high 30-point outburst and third-straight game with 24-plus points in an intense 83-79 road win over the Illinois Fighting Illini.

“At first, it was not easy, but I gave him my trust. And I felt like everybody gave him their trust also. So I feel like everybody trusts Coach on the team, and it makes us all stick together and play as one.”

Must Read:
Carleton Ravens and Syracuse Orange set to tangle once again

On a steady climb, since leading Team Quebec to the 2019 U17 Canadian national basketball championship title in Fredericton, New Brunswick. Mathurin is almost a sure bet to not only add to Lloyd’s impeccable All-American producing resume, but to also join fellow Montreal basketball players Chris Boucher, Khem Birch and Luguentz Dort in the NBA.

Mathurin’ scoring delirium has propelled his name to the top of the 2021-22 Canadian NCAA men’s basketball advanced stats tracker.

With the victory over the Fighting Illini, the Wildcats have now racked-up two big wins over two Big Ten teams — also earning an 86-66 victory over the Michigan Wolverines on neutral ground in Las Vegas.

Arizona will look to continue its hot start to the season as they wrap-up an impressive non-conference slate with three more games, including a tough road match-up against the Tennessee Volunteers.

As the buzz continues to build around Mathruin and the Wildcats, one thing is certain, the Canadian guard is starting to check-off all the boxes.