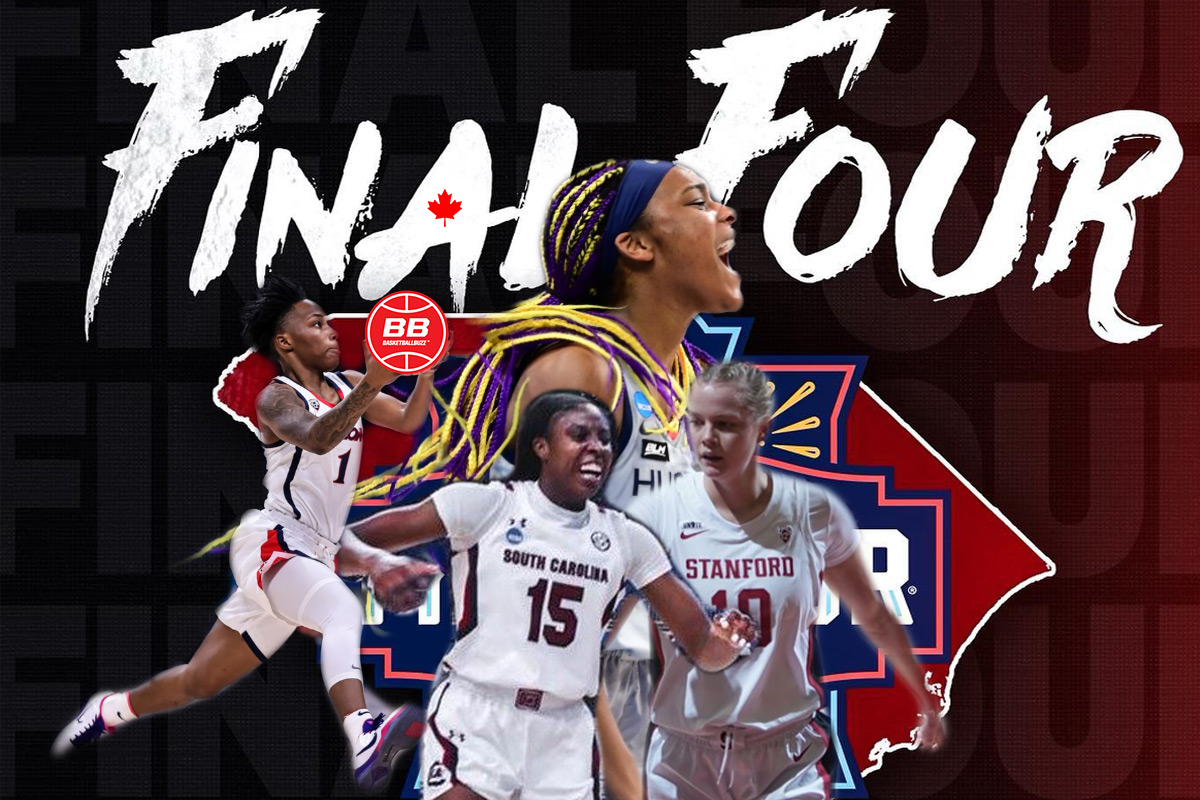 In another subtle reminder that the Canadian women’s game is well ahead of the men, four ladies will take over the 2021 NCAA Women’s Final Four in San Antonio, Texas for an opportunity to play and win a national championship.

The 2020-21 season started with a record 88 women playing NCAA college basketball. The numbers dwindled down to 27 at the start of the 2021 NCAA Women’s Division 1 Tournament and is now down to an impressive four players in the Final Four.

For the first time-ever, the Final Four remaining teams each feature a Canadian basketball player on their roster, thus guaranteeing a championship for a Canadian since Hamilton’s Kia Nurse won the title in 2016 with the undefeated University of Connecticut Huskies.

The No. 1 Stanford Cardinal featuring Alyssa Jerome will take on rising star Laeticia Amihere and the No. 1 South Carolina Gamecocks in the opening game. The second-game pits freshman sensation Aaliyah Edwards and the No. 1 Connecticut Huskies against Shaina Pellington and the No. 3 Arizona Wildcats.

With two highly anticipated match-ups on deck for a spot in the 2021 National Championship game, we take a look at the four remaining Canadian players and their respective teams.

Following in the footsteps of Kia Nurse is Kingston, Ontario native Aaliyah Edwards. The six-foot-three freshman sensation is as good as they come. The 23rd ranked player in the 2020 class has lived-up to expectations, averaging 10.8 points, 5.6 rebounds, 1.5 assists per game for the 28-1 Huskies who enter the national semi-final on an 18-game winning streak.

The next game, Edwards continued her outstanding play with 18 points, 3 rebounds, 2 assists in the 92-72 sweet-sixteen win over the No. 5 Iowa Hawkeyes. A quick turn-around and with fatigue setting in, the freshman made key plays down the stretch adding 4 points, 7 rebounds, 1 assist in the thrilling 69-67 win over the No. 2 Baylor Bears to reach the Final Four.

Laeticia Amihere nicknamed “The Black Queen”, the six-foot-four sophomore is a primary reason for the South Carolina Gamecocks checkmating their opponents on their way to a 14-2 conference record.

Amihere, a Mississauga, Ontario native who became the first Canadian woman to dunk in a game when she threw one down at the tender age of 15, averaged 6.8 points, 5.4 rebounds and 1.2 blocked shots in the regular season.

The number 10th overall recruit and the No. 2 forward in the 2019 class hasn’t missed a beat, helping the Gamecocks to the Final Four. In the opening game of the tournament, Amihere posted 11 points, 8 rebounds, 1 assist in the 79-53 win over No. 16 Mercer. In the next round, against the No. 6 Oregon State Beavers she added 8 points, 9 rebounds, 1 assist in the close 59-42 victory.

In the sweet-sixteen, Amihere continued to dominate, finishing with 15 points, 7 rebounds, 1 assist as South Carolina knocked-off No. 5 Georgia Tech to advance. With a chance to advance to the Final Four, Amihere nearly came-up with a triple-double with 10 points, 8 rebounds and 9 blocked shots as the Gamecocks held No. 6 Texas Longhorns scoreless the entire fourth-quarter.

Shaina Pellington a former 2018 Big 12 freshman of the year with the Oklahoma Sooners is enjoying a solid year with the Arizona. The Wildcats cruised to a 13-4 conference record and have turned their post-season run into a Cinderella story. The five-foot-eight junior guard contributed with 5.6 points and 1.7 assists in 25 games.

The Pickering, Ontario native chipped-in with 5 points, 3 assists, 1 rebound, as Arizona cruised past No. 14 Stony Brook with a 79-44 win. The next game Arizona squeezed past No. 11 BYU to advance, Pellington once again added 5 points and a 1 rebound. In the sweet-sixteen she finished with 6 points, 3 assists, 1 rebound as Arizona took down No. 2 Texas A&M, pulling-off a 74-59 win.

Pellington added 2 points, 1 rebound, 1 assist in the 66-53 win over the Indiana Hoosiers to reach the Final Four.

Alyssa Jerome, the oldest of the four Canadian players in the 2021 NCAA Women’s Final Four is looking to close out her collegiate career with the ultimate prize. Playing limited minutes for the Cardinal, the 2020 Pac-12 Academic Honor Roll student from Toronto scored a season-high 14 points against Oregon State on February 13, 2021.

In her only significant action of the tournament Jerome contributed with 5 rebounds and added 1 assist as Arizona blew-out No. 16 Utah valley 87-44 in opener.‍