Eddie Barnes, who coaches point guard Juevol Myles at Tallahassee Community College. He confirmed Myles visited K-State this weekend, but they haven’t had a chance to discuss the visit in detail.

“We’ve just talked in passing,” Barnes said. “We really haven’t had time to sit down. I usually give ’em a day or two after they get back to let the bells and whistles wear off.”

Barnes said he’ll meet with Myles later in the week, but he doesn’t think a decision is imminent.

The story on Myles: He’s a 6-foot-1 point guard who averaged 12 points and 3.7 assists for Tallahassee this season. He shot 36 percent from 3-point range and 40 percent from the floor.

Myles hails from Ontario, and he signed with Louisiana Tech out of high school. He enrolled at Tallahassee because of Clearinghouse issues, but he has three years of eligibility remaining after finishing his academic work ahead of schedule.

“He came to us at Christmas, so we were a semester ahead,” Barnes said. “He’s a good student. When we got the first semester done and a little bit of the summer sat down and talked.”

Myles is another name in the mix for K-State’s final 2010 scholarship. The Wildcats signed three players in the fall.

The fourth and final scholarship for Kansas State’s 2009-10 recruiting class has been filled. Juevol Myles, a freshman from Tallahassee Community College, told the Mercury by phone today that he verbally committed to the Wildcats Monday night and will sign his letter of intent today after visiting Manhattan this past weekend.

“I just talked to coach (Frank) Martin and coach (Matt) Figger last night,” Myles said. “Coach Martin said that he was in the gym and that I made his night. Coach Figger, the same way. I think we know how special the team is going to be next year and I just want to be a part of that.”

Must Read:
Duke sets the standard with "The Next Chapter"

Myles, who will have three seasons to play three at K-State, said it was the fan support he saw while on his visit that convinced him Manhattan was the place for him.

“It was a bunch of various things that happened,” said the 6-foot-1, 190-pound point guard. “I visited George Washington the weekend before and I kind of got a good feeling for them but I went over to Kansas State and the guys on and off the court welcomed me, the coaching staff was very kind and the fan support in Manhattan was big.”

Myles, who grew up in a small suburb just outside of Ontario, Canada, said Manhattan reminded him of his hometown.

“Small town. I like it. It kind of has that at-home feeling for me because where I’m from in Canada,” he said. “But the big thing was the fan support and I could see that Kansas State had a lot of supporters.”

During his freshman season at Tallahassee Community College, Myles averaged 12.1 points and 3.7 assists per game while averaging a 2.25 assist-to-turnover ratio. Myles shot 40 percent from the floor and 36 percent from 3-point distance on the season

“I’m basically a pass-first point guard that can do various things,” he said.

Myles said he was told by the coaching staff he would play primarily point guard, which would give the Wildcats the opportunity to keep Jacob Pullen at the two-guard if things go as planned.

“They didn’t promise me a starting spot or playing time but they said the opportunity is there and that’s basically all I needed to hear — that there’s an opportunity where I’m going and where I can impact a team right away,” he said.

“My job is to run the team kind of like (Denis) Clemente did here.”

Myles originally signed with Louisiana Tech out of high school before ending up in community college. The guard said it had to do with NCAA clearinghouse problems.

“I put myself into the clearinghouse because Canadian players can go to high school for five years but they changed the rule after my fourth year that certain courses weren’t allowed in my fifth year so things got messed up there,” Myles said.

“But I was trying to get it appealed so I could go to Louisiana Tech. I was just waiting around at home for a couple months but it didn’t go through.”

Myles, who was set to visit Oklahoma this weekend and Nebraska the following weekend, has cancelled those visits.

He said he expects to arrive in Manhattan in July and begin working out right away. 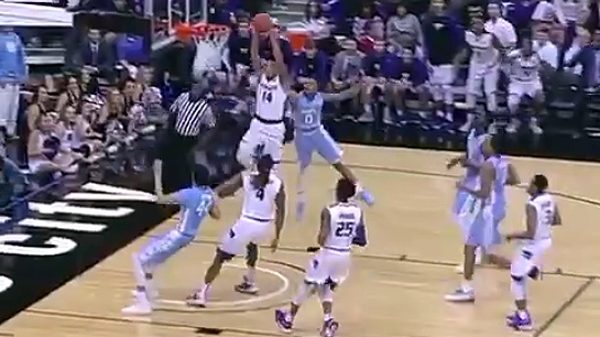 Canadian Justin Edwards (Whitby, ON) runs the floors and throws down an impressive two-hand throw-down against the North Carolina Tar Heels. The 6-4 senior...