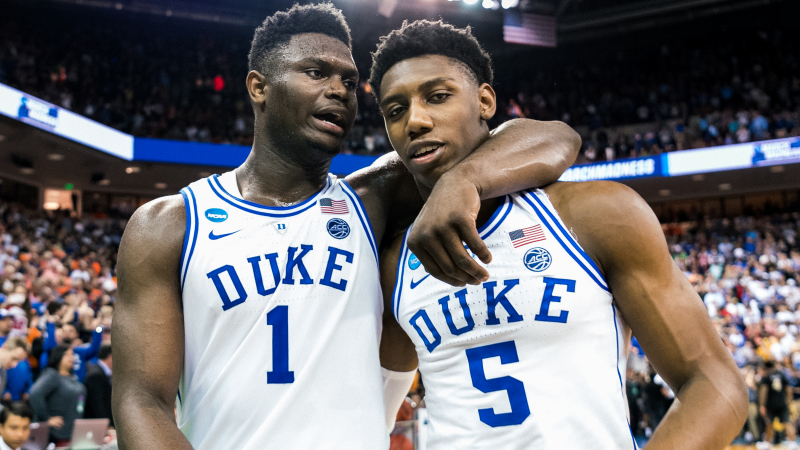 Canada’s R.J. Barrett has been named a first-team Associated Press All-American, and finished second in AP Player of the Year voting to teammate Zion Williamson.

Barrett and Williamson, who led Duke to the NCAA men’s basketball Elite Eight this season, are only the second set of freshmen teammates to make the AP First Team.

Kentucky’s John Wall and DeMarcus Cousins were the first to manage the feat in 2010.

Barrett (Mississauga, Ont.) was one of Duke’s most effective players, averaging 22.9 points, 7.5 rebounds and 4.1 assists per game.

He received two votes for AP Player of the Year, but Williamson — who electrified fans with his other-worldly athleticism — was the runaway winner.

Williamson, the projected No. 1 pick in this summer’s NBA Draft, received 59 of 64 votes for the award.

Murray State’s Ja Morant, Virginia’s De’Andre Hunter and Michigan State’s Cassius Winston were the only others players to receive votes, with one apiece.

Barrett is also a projected NBA lottery pick, and is the most-hyped Canadian recruit since Andrew Wiggins, who went No. 1 overall in 2014.

Wiggins has struggled to live up to the hype that surrounded him in high school, and Barrett has faced similarly colossal expectations.

And there have been gripes about his perceived effectiveness in comparison to the media coverage he has received.

An anonymous survey of 110 U.S. college players by The Athletic this year named Barrett college basketball’s most overrated player.

But in the same poll Barrett also receive votes for “best player in the game,” and he was routinely praised for his performances Duke.

“While Zion Williamson might beat Barrett for the No. 1 pick in June’s NBA draft, Barrett proved to be the more impressive college player,” USA Today wrote.

“The freshman carried the load when Williamson was hurt for six games, spearheading the Blue Devils to three wins in March that helped them become the NCAA tournament’s top overall seed.

“When Duke was at full strength, he gave the team a scorer who wanted the ball at the end of the game.”

Some have speculated Barrett’s ceiling as a pro will be similar to that of mid-level stars like DeMar DeRozan and Jimmy Butler.

He is still projected as a top-three pick in the NBA Draft, scheduled for June 20 at Barclays Center in Brooklyn, N.Y.

Barrett is the son of Canada Basketball general manager and former Olympian Rowan Barrett, and R.J. has been a fixture in Canada’s national program.