Katherine Plouffe, one of the top Canadian high school women’s basketball players, will visit Arizona State next week. The 6-foot-2 wing from  Edmonton also is considering Wisconsin-Green Bay and Marquette.

As high school juniors, Katherine and Michelle were at the National Elite Development Academy in Ontario. When funding dried up for that program, they returned to Edmonton to Harry Ainlay High School
with their team going undefeated capped  by an 80-50 win in the Alberta 4A provincial final.

“They are the kind of players you might see once in your entire coaching career if that,” Corrie Yusypchuk, Ainlay elite athletics advisor, told the Edmonton Sun. “They are also wonderful people, mature, poised and unassuming.”

Yusypchuk believes the Plouffe twins eventually will play for Canada in the Olympics.

Canadian Theresa Jantzen from Medicine Hat, Alberta, was on the Pac-10 all-freshman team in 1999 and led ASU in scoring in ’99 and 2000. She married and finished her career at Oklahoma.

The Sun Devils will play at Tennessee next season in return for the Lady Vols’ November 2006 appearance at Wells Fargo Arena. The return game was postponed until after Sybil Dosty, who started at Tennessee and transferred to ASU, finished her career.

Tennessee was a No. 1 seed in the NCAA Tournament but lost to Baylor in a Sweet 16 game to finish 32-3.

ASU also will play at South Dakota State next season with home non-conference games against Marist and DePaul (all NCAA Tournament qualifiers) and a tournament in the Bahamas. 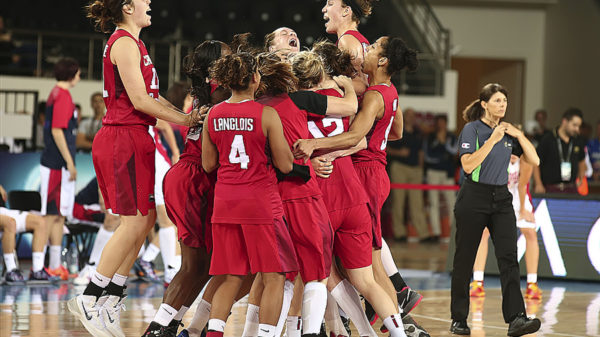 The coaching class – an interview with Kristin Cole

Coach K. Coaching…that’s the dream right there for a kid who picked up the writers pen because he couldn’t pick up his shot. Anyone...