Saddled with continuously being compared to their cross-town rivals, the Gee-Gees have shown a steady improvement since their first season with James Derouin as their head coach. The Gee-Gees not only played an impressive season, but also claimed their first ever CIS medal.

The Gee-Gees started the season with a bang, winning 11 of 13 to start the season, including an eight-game winning streak. In week six, they cracked the CIS Top 10, and steadily improved their standing to close the season as the third ranked team in the country.

Ottawa met the Ravens twice during the OUA season, losing the Capital Hoops Classic by only three points, and closing out the year with a triple overtime loss by four points. With an impressive 15-5 season where every loss was by five points or fewer, the Gee-Gees entered the OUA playoffs as a solid contender and one of the few teams that could challenge Carleton.

Building on their regular season success, Ottawa would register wins over Ryerson in the OUA East semi-final and Windsor in the OUA semifinals. Getting past two teams that had beat the Gee-Gees in the regular season, they earned their way into the OUA finals against the Ravens. Down by 10 at the half, Ottawa would fight back, scoring 24 points in the fourth quarter, but were still down 3 at the final buzzer, recording a loss of 69-72. While the loss was disappointing, it did earn them OUA silver and a spot in the CIS Final 8.

Their first challenge of the CIS finals would be against former coach, Dave DeAveiro and the McGill Redmen. Although the game remained close through three quarters, the Gee-Gees would ultimately move on to meet Lakehead in the semi-finals. While Ottawa wanted to repeat their OUA match-up with the Ravens, the Thunderwolves sent them to the bronze medal game with a fourth quarter push to defeat the Gee-Gees 66-62. The bronze medal would not come easy for Ottawa, as they had to battle Acadia through every quarter and into overtime. The Gee-Gees won the contest 92-85, outscoring the Axemen 15-8 in overtime to earn their first ever CIS medal.

Must Read:
CIS basketball gets much needed marketing lift

The Gee-Gees will be without three seniors this season as Warren Ward, Dimitrios Seymour and Jordan Vig graduated. While the team will miss the leadership of Dimitrios and Jordan, the absence of Warren Ward, as he pursues a professional career in Germany, will be noticed on the court and on the scoresheet. Warren averaged 17.8 points and 7.6 rebounds per game in his 32.8 minutes. “Warren was a shade under an NBA player, and we’re certainly going to miss him” says coach Derouin.

Fortunately, Ottawa retains the services of Johnny Berhanemeskel who led the team in scoring with 18.9 points per game and Gabriel Gonthier-Dubue who contributed 12.4 points per contest. Mike L’ Africain and Vikas Gill are also expected to play bigger offensive roles this season, with 2nd year Caleb Agada likely becoming a regular starter.

“Mike went through a bit of a sophomore funk last year, but in the preseason he has performed well and was dominant against Wisconsin. Caleb Agada had been an absolute monster, shooting close to 60% (in the preseason), led the team in blocks, led the team in rebounding and shooting well from three. We didn’t know he was going to get here this fast. He has been spectacular” added Derouin.

The Gee-Gees have added two transfer students to their roster for this season, including Terry Thomas, who averaged 18.9 points per game for St. Francis Xavier in the 2011-2012 season but will be ineligible until November 29th.

Laurentian transfer Jeff Plunkett has come to play with his younger brother Matt and is expected to fill the void left by Vig with more of an offensive edge. The only true rookie to join the Gee-Gees squad for this season is Nick Jordan, a 6-2 local shooting guard coming out of St. Pius X high school with solid fundamentals and a solid work ethic.

The Gee-Gees are coming off their first ever CIS medal, and despite the loss of Ward, they have retained some significant scoring power with Berhanemsekel and Gonthier-Dubue and have picked-up some very capable transfers to fill the void.

If the puzzle pieces can come together to form a cohesive unit, we can expect Ottawa to perform as well as or better than last season. “I think this group has the potential to be stronger, not necessarily because of the new guys, but because the young core moving up” says Deroin.

In all likelihood, we will see the Gee-Gees return to the Final 8 this season, and you can bet they will be pushing for a championship appearance with the mission of dethroning their cross-town rivals. With a perfect 8-0 preseason record against CIS opponents, they appear ready for the challenge. 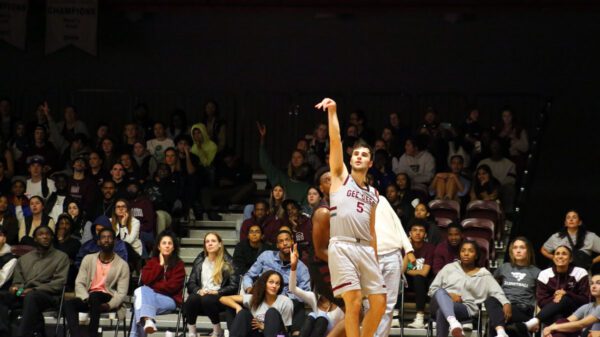 Will 2023 be the year of the Ottawa Gee-Gees? A big 30-point statement win over the McMaster Mauradeurs has set the tone for what...