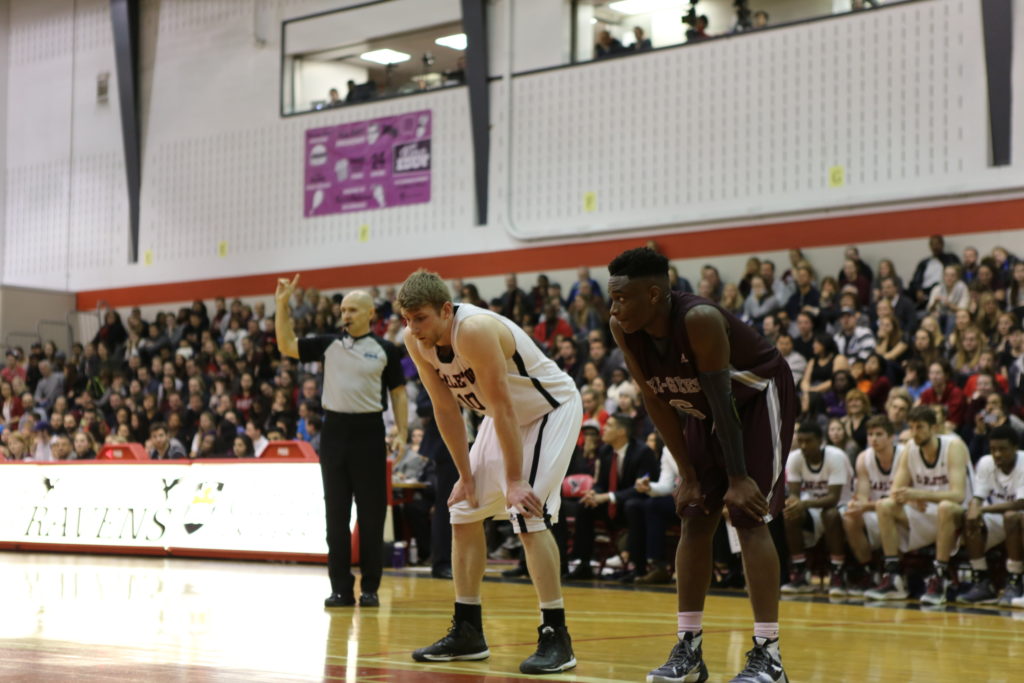 The truth is, when it comes to University basketball in Canada the “613” has got it on lock!

Every year local Ottawa basketball fans circle their calendars, flood the Ravens Nest, Montpetit Hall or The Canadian Tire Centre (CTC) for what has arguably become the hottest ticket in a traditionally hockey dominated town. Ravens vs. Gee-Gees, Carleton versus Ottawa has become undoubtedly become synonymous with not only local fans, it has become one of North America’s most feared rivalries between the two CIS Basketball national powerhouses.

In the latest chapter of this storied by-town rivalry Ottawa Gee-Gees fifth year senior point guard Mike L’African (Oakville, ON) connected on two huge buckets down the stretch, including a patented fade-away shot with a stitched-up shooting hand to steal a well deserved 75-73 win over the 11-time CIS Men’s Basketball National Champs. With the win the Gee-Gees reclaim the number one spot on the weekly CIS National rankings after being dropped to third thanks to a unexpected loss to Laval Rouge et Or during the Christmas holiday break.

L’African who finished with 17 points, 4 rebounds, 6 assists in 38 minutes including his late game heroics spoke with BasketballBuzz after the game, describing what it felt like earning his first ever win at the Ravens Nest and hitting the game-winner and playing with three stitches in his shooting hand.

“It’s funny we work on their switch everyday and that’s my favorite shot, I like fading away to my right shoulder and getting away from the block shot. I’ve done that before but never with stitches in my hand, that was a good shot. I cut myself doing the dishes, I was in emergency for 12-hours a few days ago, no sleep, it was numb the whole game, it’s still shaking, but these are the games you can’t sit out.” An excited L’African elaborated further.

The victory ended Carleton’s 133-game OUA home winning streak dating back to 2007 while enacting some much needed revenge for the Gee-Gees who were humiliated 93-46 in the 2015 CIS National Championship game having just beat the Ravens less than two weeks prior.

Wins at the Ravens Nest don’t come easy for OUA, CIS and NCAA division one teams, one would have to dust off the record books and flip back to 2007 when Ottawa last knocked off their arch nemesis on their home floor.

With the taste of last year’s championship defeat still lingering in their minds the Gee-Gees and their coaching staff brought their A-game across the Rideau Canal. The confident and veteran laden Gee-Gees executed their game plan to perfection and stayed within striking distance of the Ravens as both teams exchanged blows and connected on timely three-point baskets to keep the sold-out, standing room only crowd on edge.

Despite a well prepared game plan, which included the Gee-Gees out-rebounding Carleton for perhaps their first time in the James Derouin Era, Ottawa and their supportive fans found themselves on the wrong side of the scoreboard as the game approached crunch time.

With Carleton leading 69-61 with under seven minutes remaining Gee-Gees supporters were staring at a familiar outcome, yet another loss to Carleton. But unlike previous match-ups, the big game experience kicked in as Ottawa fought back behind the stellar play of All-Canadian and Player of the Year candidate Caleb Agada who finished with double-double of 23 points and 10 rebounds. The fourth-year forward dominated, early and often and took over late, despite a painfully and visible sprained ankle that forced him to be carried off the court by teammates at the end of the game as the Gee-Gees rallied using a late 14-4 run to steal the game as Carleton’s last second attempt bounced out.

The Gee-Gees out-rebounded Carleton 43-32 including grabbing 18 offensive rebounds in the process thanks to a conscious effort on the boards largely due to the off-season addition of transfer Nathan Mc Head Coach Derouin discussed his teams effort on the glass and what it meant to pull out the win. “It’s been a while since Teddy (former player Teddy Kabutu) hit that corner three, I think I’m the only person that can remember the last time we won here, or the last time they lost a league (OUA) game here. There is a bucklist with these guys and winning in this gym is on that list, some things we wanted to check off and to be able to do it is great.”

“I don’t think we overly celebrated tonight’s win, this is the third in three years. I’m hoping that our veterans that have been there for all three wins understand that, good job, but the job is not done, but a mean great stepping stone, great stuff out there tonight.” Added Derouin whose team now sports a 3-3 record against the Ravens in the last six games.

Carleton’s NCAA division one transfer Kaza Keane (Ajax, ON via Cleveland St.) continued to impress, finishing with a game-high 24 points on 11-of-16 shooting, Guillaume Boucard (Montreal, QC) was next in line with a solid 20 points and five rebounds. Ryan Ejim (Toronto, ON) came off the bench and was instrumental, adding 14 points, most of them off pick and pop situations to round-out the Ravens double digit scoring.

Playing in his first bytown classic Kaza Keane described the game as a “really good atmosphere” and thanked for all the fans that came out and supported. “Canada basketball is on the rise and this is what I expected I when transferred here, that was a great game against a great team.” described the Ravens leading scorer. Keane also pointed out the inability to get stops and rebounds down the stretch “we didn’t get stops when we needed them, it’s a tough loss.”

Both teams will meet again on February 5th at the Annual Capital Hoops classic at the Canadian Tire Centre in what promises to be yet another high level match-up that could very well determine OUA playoff and CIS Final 8 seeding implications.