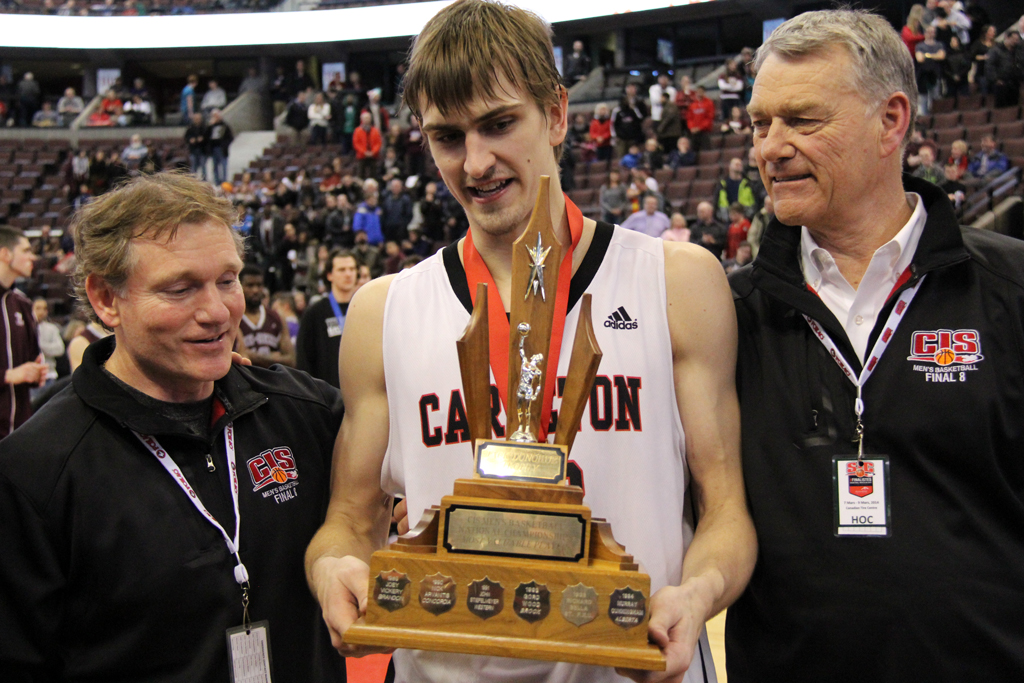 Ottawa, On – (BasketballBuzz) – In his final game in a Ravens uniform, Tyson Hinz led the way with 30 points, six rebounds, five assists as Carleton beat the University of Ottawa Gee-Gees 79-67 to claim their fourth straight CIS National Championship – a record tenth championship for Coach Dave Smart in the past twelve years.

The Ravens were stunned by the Ottawa Gee-Gees at the buzzer in a wild Wilson Cup OUA final. Exactly one week later, the Ravens and Gee-Gees met again, this time on the floor of Ottawa’s Canadian Tire Centre, in an all Ottawa rematch for the national championship.

The Ravens had been the top ranked team in the country until last week’s loss. Regardless, there was little doubt that the top two teams in the CIS were taking the floor Sunday afternoon. Coming into Sunday’s final, Smart and the Ravens had “made some adjustments…and tried to change how [they] approached the defensive end and the defensive intensity in terms of staying intense for 40 minutes.”

The game plan was in full effect as neither team was able to find any offensive rhythm in a first quarter largely defined by the Ravens rebounding and defense. Thomas Scrubb led the charge for the Ravens in the first quarter with six points on 2-4 shooting. Unlike last week, the Gee-Gees were unable to establish their outside shooting going 5-14 from the field and 3-9 from  to find them down 16-14 at the first buzzer.

Ottawa came out of the huddle for the second quarter prepared to push the pace and quickly opened up a four point lead on a 6-0 run punctuated by a Terry Thomas three-pointer with just under nine minutes remaining in the quarter. Tyson Hinz answered the call for the Ravens, dominating the Gee-Gees in the paint to the tune of 13 points and 3 rebounds in the second quarter. The Gee-Gees  were able to keep themselves in the game behind 8 points and 3 rebounds from Thomas including a three late in the quarter which tied the game at 33 with under 1:30 left.  Thomas Scrubb (7 points, 3-6 FG, 2-3 3Pt in the quarter) closed the half with a putback to put the Ravens up 37-35 at half-time.

The Gee-Gees tied the game quickly off a long two from Thomas. That would be as close as the Gee-Gees would get in the third as the Ravens found their rhythm on defense, smothering the Gee-Gees inside and forcing them to shoot from the perimeter. The Ravens also dominated on the glass, out-rebounding Ottawa 14-8 in the quarter. On offense, the Gee-Gees were unable to find an answer for Philip Scrubb or Hinz who continued to punish Ottawa inside and on the glass. The Ravens ended the quarter up by 9, their biggest lead of the game.

Carleton continued to control the pace and the glass in the fourth thanks to Hinz who continued to dominate under the basket with another 9 points in the final frame. The Gee-Gees made a run midway through the quarter to cut the lead to four, but were unable to overcome shooting 6-20 to close the game.

Despite keeping it close throughout the first half, the Gee-Gees simply didn’t have an answer for Hinz, the tournament MVP.  Hinz described Carleton’s effort as “a more complete game. There was forty minutes of battling…but I think in terms of the other game we let up for too long.” The Ravens certainly didn’t, dominating the inside to a plus-15 rebound differential and outscoring the Gee-Gees by 12 in the paint. Officiating was an issue in a physical game with both teams feeling they weren’t getting calls.  Said Ottawa coach James Derouin, “We didn’t get a break tonight. Whether that was a bounce, or a call, or a shot…There was definitely a stretch where it seemed like everything was going their way.”

The Ravens will lose Hinz in the offseason. The veteran big-man described winning his final game at home in Ottawa as “special” but attributed a lot of credit to his teammates. Also graduating this year is Kevin Churchill who relished the chance to exact some revenge on the Gee-Gees in the final game of his CIS career.

Asked about how this title differed from the last nine, Smart hesitated to read too much into his tenth championship, “I don’t know how it’s different. It’s been a long year…I’m so happy for them.”