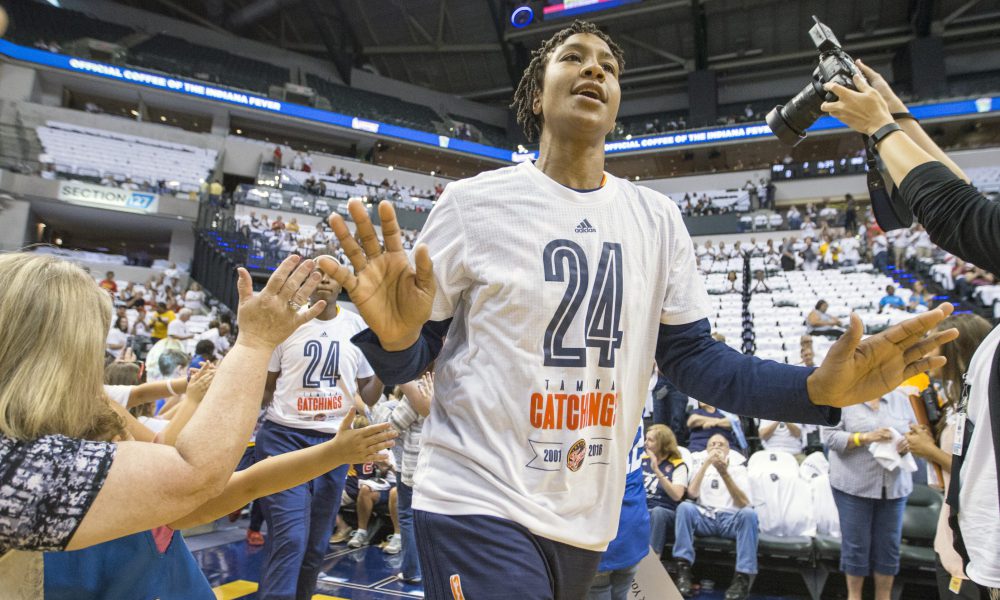 Kobe Bryant isn’t basketball’s only legendary number 24 that we’re saying goodbye to this year, forever in a fond farewell.

Another Nike flagship athlete is just doing it for the last time this campaign as their black and white full page spread attests to in tribute.

This weekend the legendary Tamika Catchings of the Indiana Fever played her last regular season game in the WNBA she’s dominated for almost as long as its two decade, twenty year run.

But she isn’t ready to pass the torch to the new superstar likes of Skylar Diggins just yet, as her Indy team clipped the Dallas Wings 83-60 sick to secure Indiana’s fifth placed seed out East for the 2016 Playoffs. Tamika made 16 points, to go along with 7 off the glass, two gimmies and a here you go. Upsetting the former Tulsa Shock in their first season taking wing in Dallas, Texas.

Like her jersey sponser the finish line is in sight, but like the baseline she’s not ready to cross it just yet.

And boy is she balling as Pacer and Team USA brother Paul George caught Catchings last “regular” game for Indiana following their time in Brazil together for the dual gold 2016 Olympic Games in Rio.

A dominant Olympia that saw Tamika team up with another retiring great, New York Liberty’s Swin Cash about to make her WNBA withdrawal for her fourth gold. You can bank on more of the womens national basketball team not seeing Tokyo as the legendary likes of Sue Bird and Diana Taurasi will probably call it a day before the next Olympics in Japan in four years time.

What used to be Los Angeles Spark, Lisa Leslie’s league (and is now Candace Parker’s) has delivered on the great expectations as we have watched so many greats work. And after this twenty sixteen Springfield inductee Sheryl Swoopes, you can be sure Tamika Catching’s will enter the Hall of Fame as soon as she is eligible.

This great womens game is saying goodbye to the best of its best as former Spark and Atlanta Dream star DeLisha Milton-Jones has just penned an open letter to retirement too. Still, although Catch-24 just bid farewell to her Bankers Life Fieldhouse faithful, save the tears Hoosiers, because it aint over yet.

Hoping to catch playoff Fever for Indy like scarlett, Catchings is still a final letter away from her postseason curtain call. The 37 year old Tamika looks to rise against the Mercury of Phoenix against another flame throwing great whose long, legendary career isn’t ready to be put out yet…

It has the makings of epic. Expect it. With everything and all they’ve accomplished to play for.

Catch it while you can.